In Q3 2022, the funding winter is well and truly in — with just $3 Bn raised in the past three months

Even one of the harshest summers on earth ever did not quell the talk of 2022’s funding winter. But there remained a healthy number of sceptics who asked us: What funding winter?

Look at the data they said, and yes, that data did indicate that at least in the first six months of the year, Indian startups raised more funding than any half-yearly period before 2022. Everything is fine, the doubters said.

But as we saw even in our coverage, the quarter-on-quarter (QoQ) funding decline clearly showed things were slowing down. And in Q3, the funding winter is well and truly in — with just $3 Bn raised across three months and the average ticket size per deal falling to a mere $11 Mn. 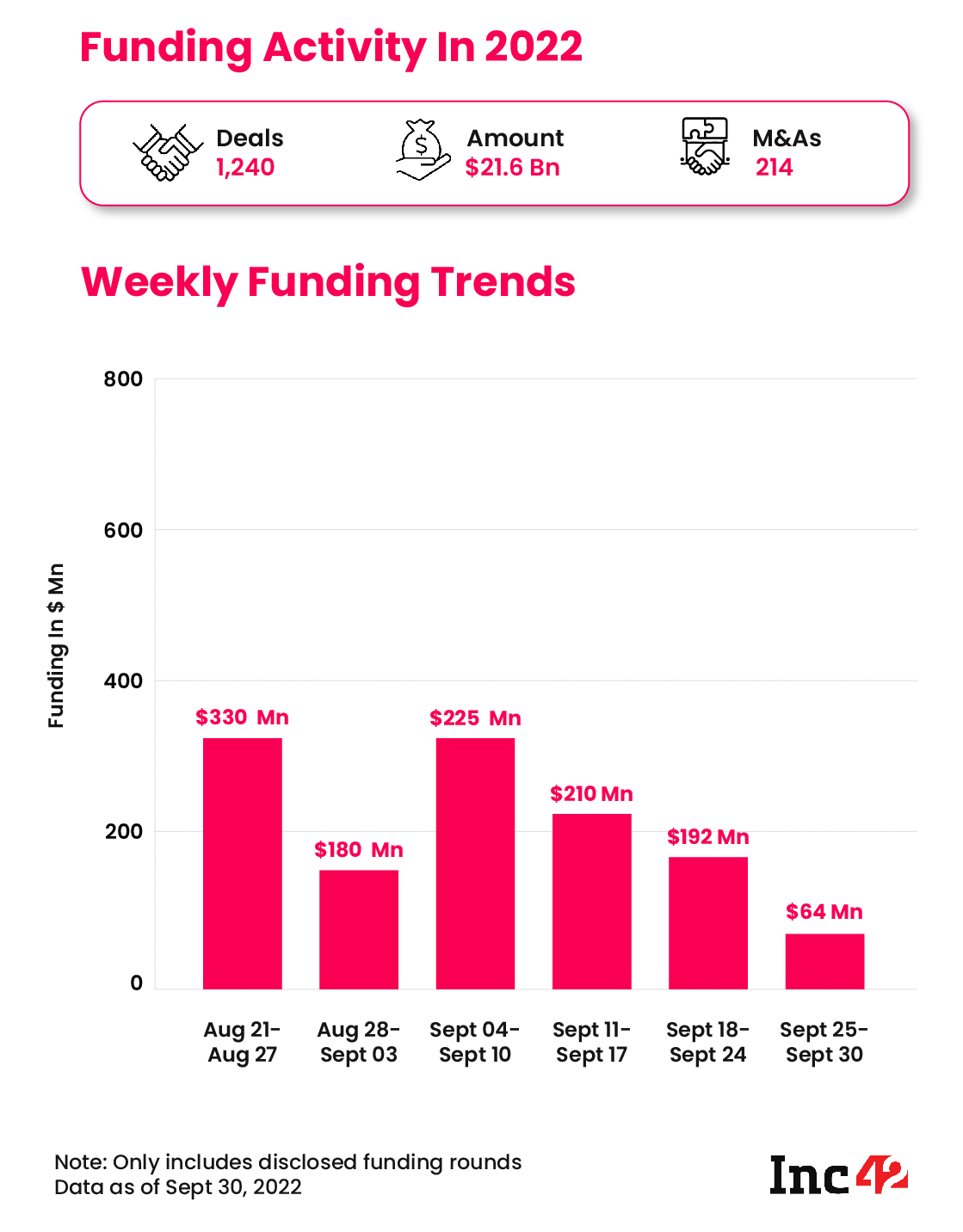 Last week, for instance, saw the lowest weekly funding tally this year with just $64 Mn raised by startups. And before we go further, here’s a look at the top stories this week:

Signs Of The Funding Winter

Here’s the headline and the key figure: Just $3 Bn was raised in the July-September quarter in 2022 — the total funding in the quarter is more than 50% lower than the previous quarter. And it takes Indian startup funding amount to 2020 levels.

The massive correction in capital inflow is coming even as investors continue to hold on to dry powder and slow down the deal-making process. And these six charts below show just how the funding winter is wreaking havoc.

Let’s start with a comparison of the quarter-on-quarter funding numbers in 2022. As you can see the most recent September quarter is in the red across all major indications. The drop in mega deals and late-stage funding is the biggest indication of just how severe the past quarter has been and highlights the slowdown clearly. 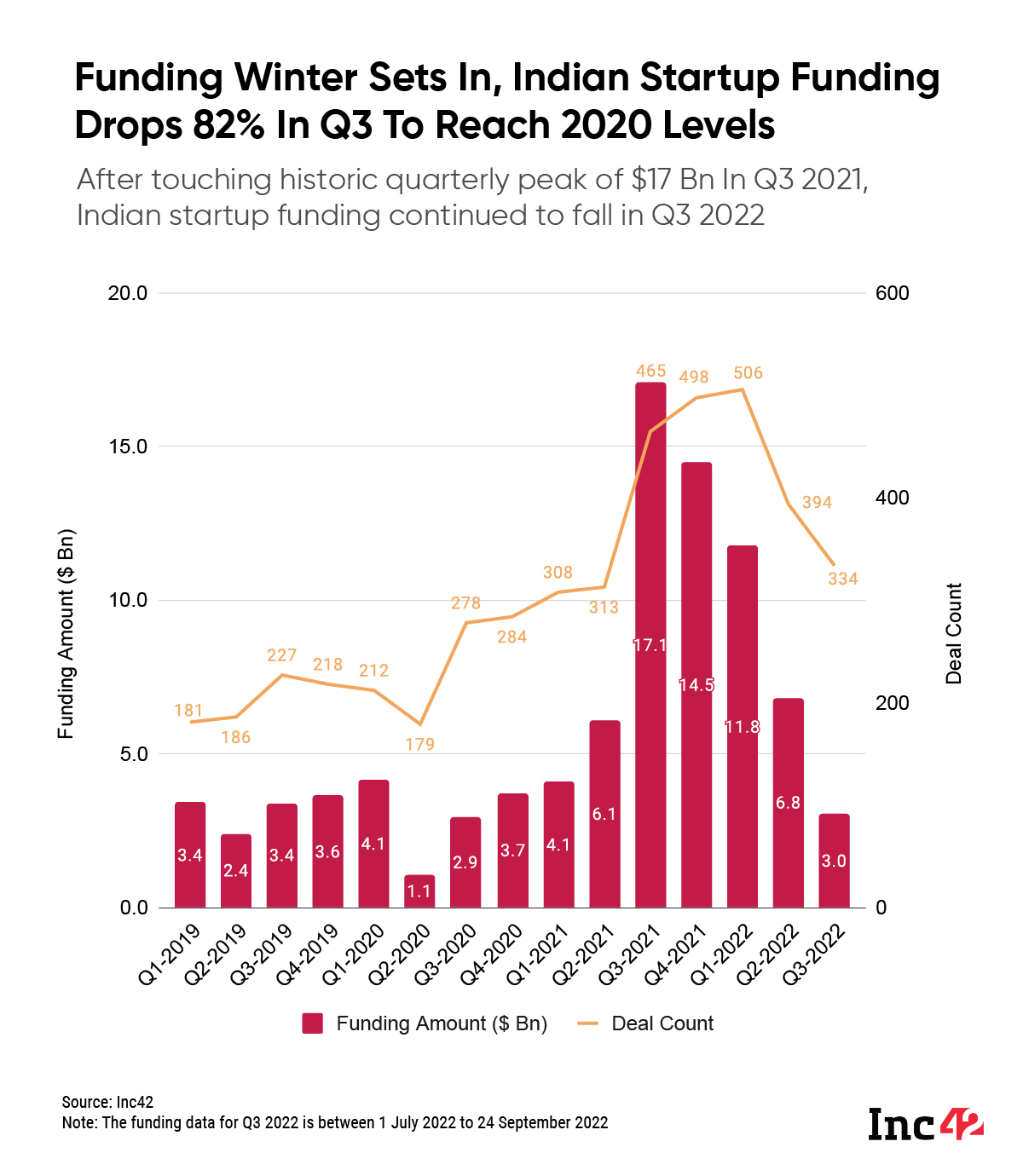 The funding boom in the second half of 2021 and early 2022 had come on the back of a major surge in the count of mega deals or rounds over $100 Mn. Now as large rounds have dried up, the impact is being seen in the form of a major drop in funding. 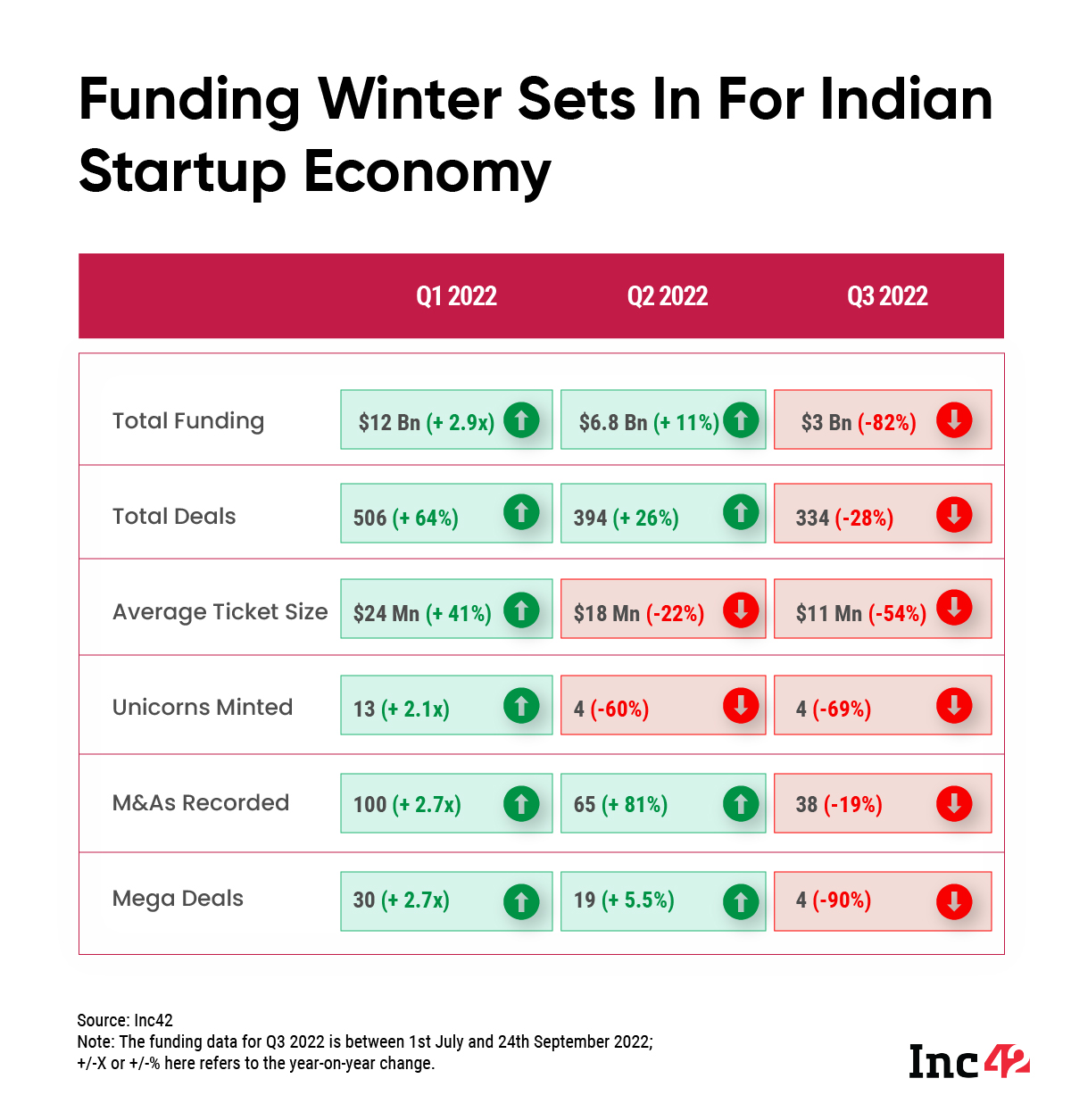 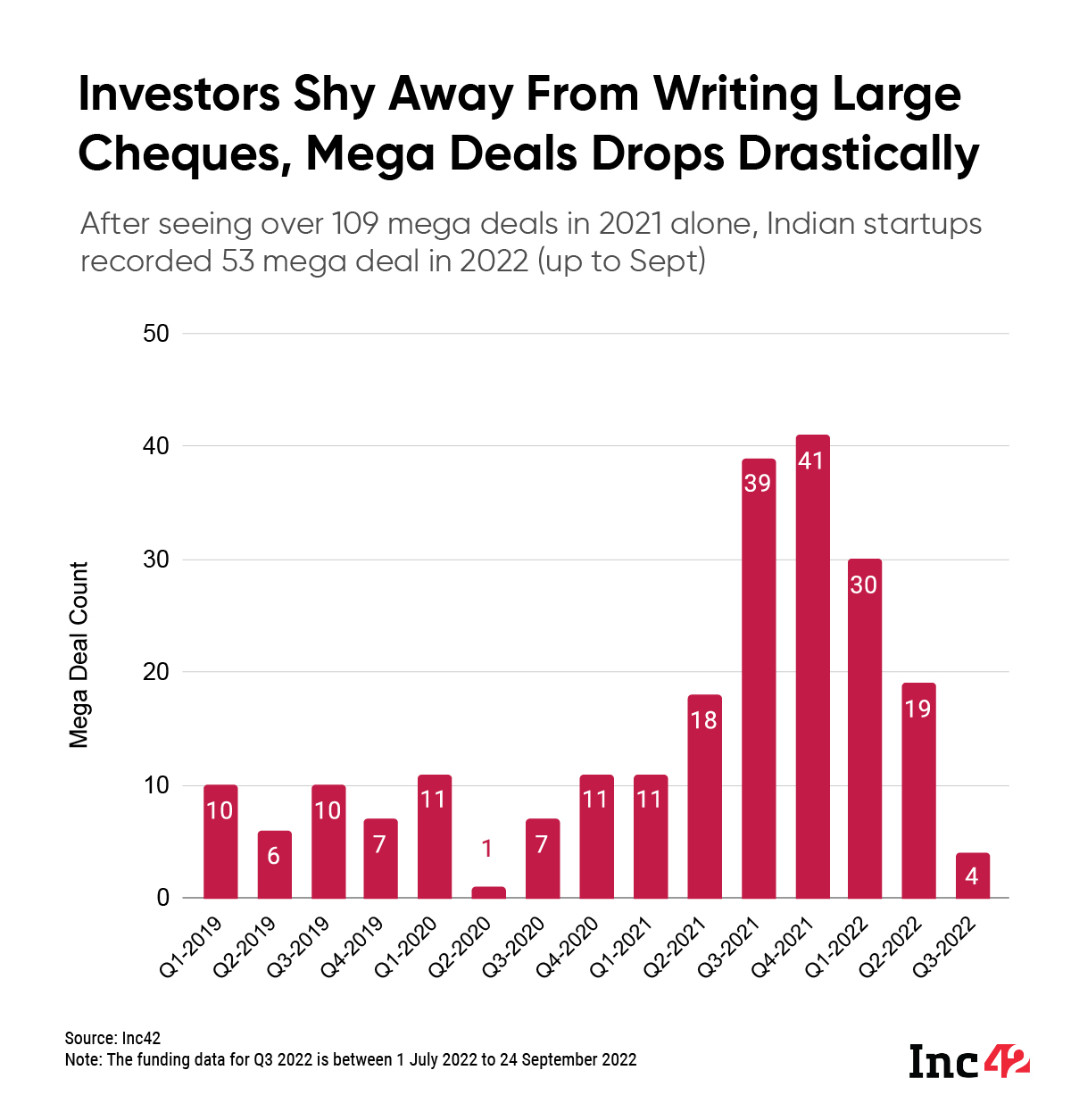 Of course, the biggest brunt has been borne by late-stage startups. These are the companies that have seen the most layoffs as over 12,500 employees have been impacted in the cutbacks this year.

Late-stage funding accounted for nearly half of the total amount raised by startups in Q3, so it does have an outsized influence on the funding numbers. Typically, the effect of the slowdown is first seen on these startups, since they have the highest scale and are likely to have overleveraged operations. 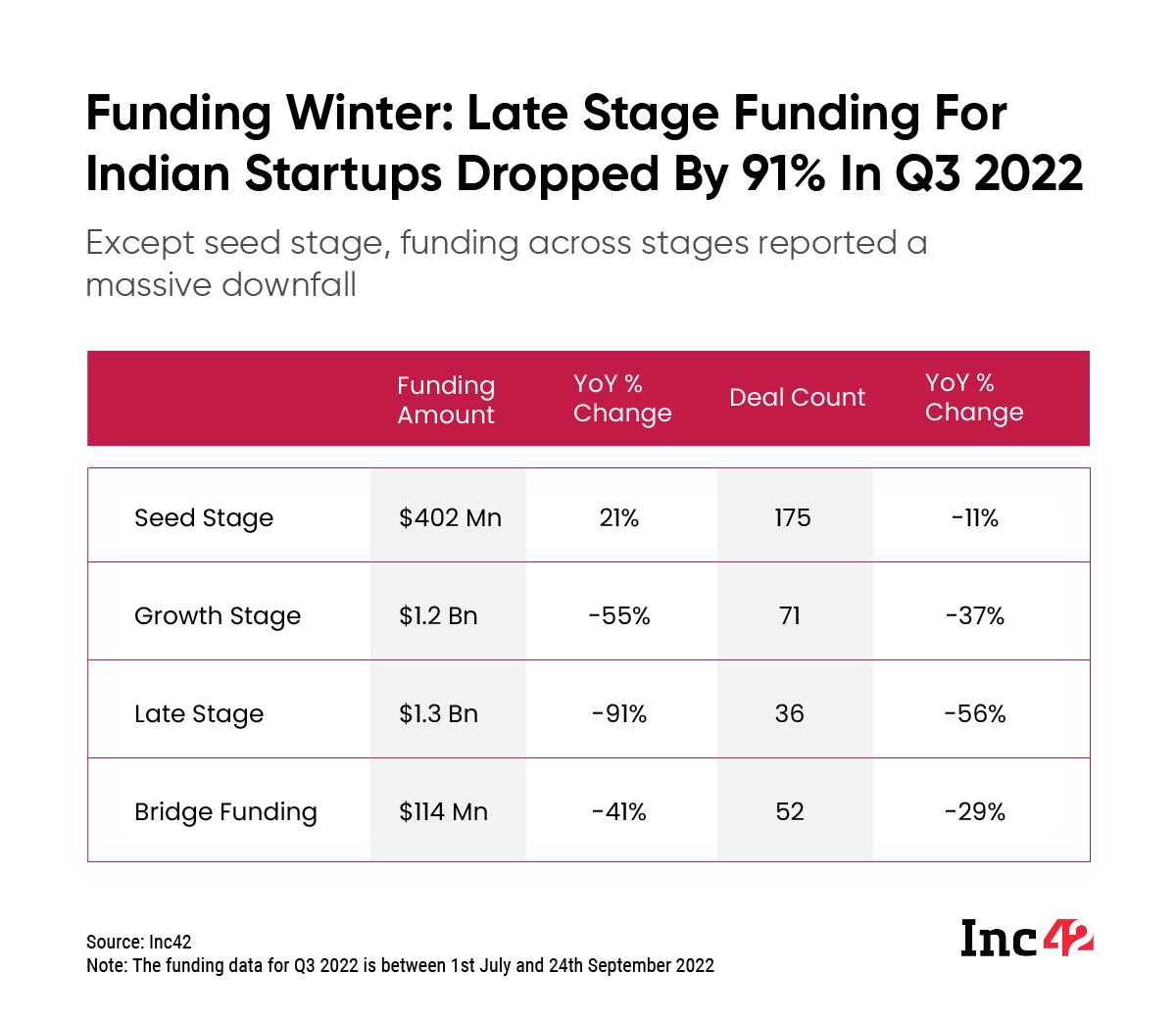 Growth-stage funding trailed just behind late-stage with $1.2 Bn raised in Q3 2022. So in essence, over 83% of the total funding amount came from growth and late stage deals.

While the 21% growth in seed funding compared to Q3 2021 can be seen as encouraging, the ticket size has not grown significantly (33% since last year), so while seed deals are ticking over, they are not dominating the funding landscape as much as the growth should indicate.

Of course, if and when the funding winter worsens, seed deals might see a slowdown too. At the moment, seed deals that typically deliver returns to investors over the next 6-8 years are becoming more prominent since the slowdown is expected to reverse by late next year. 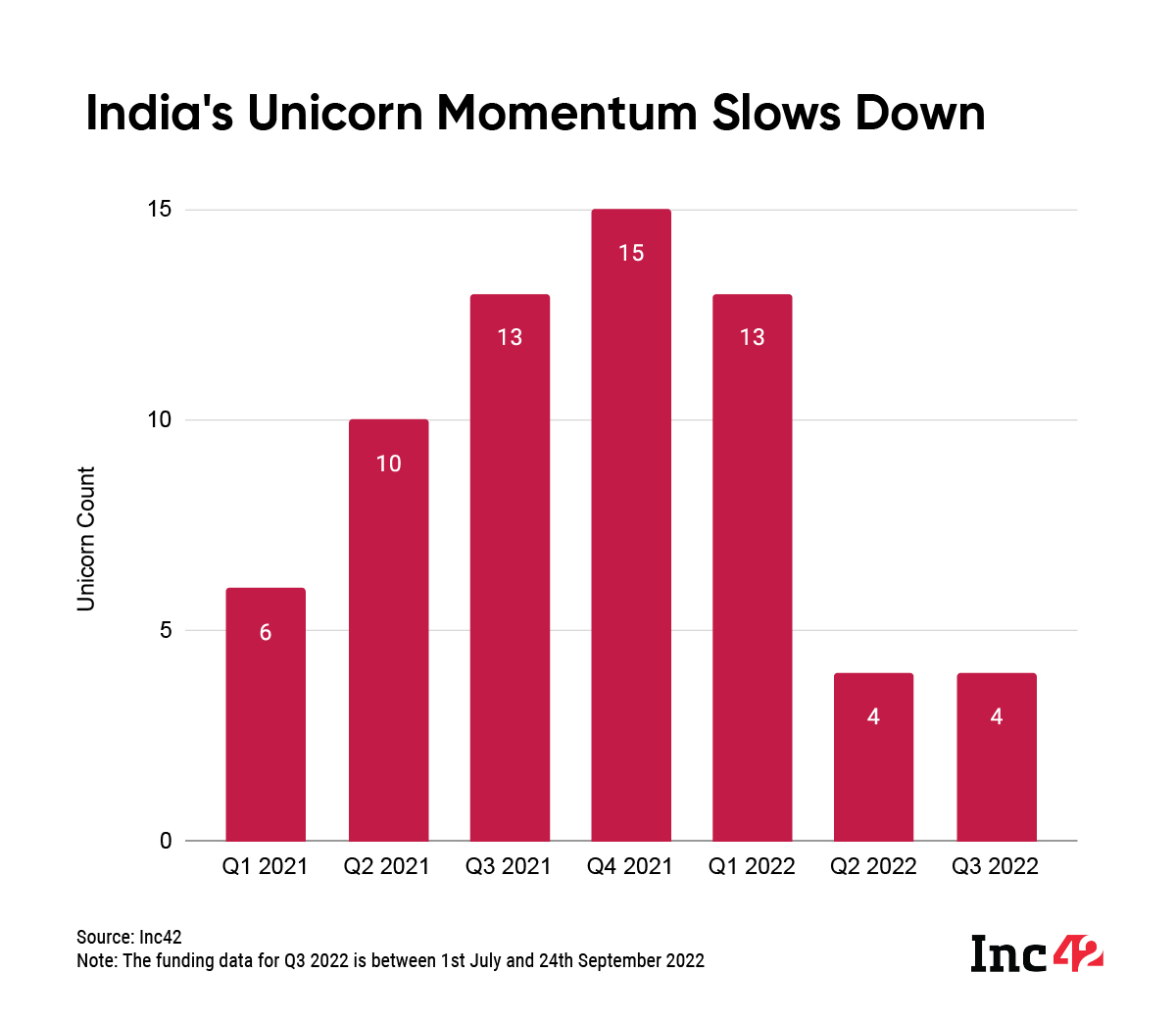 While 2021 resulted in a record number of unicorns due to record-breaking funding, this year, investors are looking to extract larger equity holdings from startups at lower valuations. Startups had all the leverage in 2022 and could demand high valuations from investors looking to make the most of the higher liquidity at that time.

But now the trend has reversed for unicorns too. The past three months just saw four new unicorns, the same as April-June 2022. The past two quarters combined have seen fewer unicorns than January-March 2022, when 13 new unicorns arrived on the scene.

This is a far cry from the unicorn mania of last year and particularly the final quarter when 15 unicorns were minted, an all-time quarterly high.

What’s Happening To The Dry Powder?

Now the slowdown begs the question on what exactly will happen in the quarter beginning October and whether the typical year-ending profit booking by institutional investors will further impact investments and valuations for startups.

The alarming decline across indicators has left many wondering how long the funding winter might go on and whether it will get worse before it improves.

Experts predict that the funding winter can last for 12 months or more, which in turn can lead to consolidation in the startup ecosystem. While VCs warned startups about the slowdown  earlier this year, their estimates about the recovery time differed wildly. We expect the pace of M&As to shoot up as more and more startups look for exits that satisfy all shareholders in a bearish climate.

With Russia’s invasion of Ukraine driving inflationary pressures across the world, there are macroeconomic factors at play too. Besides this the hawkish US Federal Reserve fiscal policy has strengthened the US dollar against the rupee. Like other currencies, the Indian rupee has also been on a free fall against the US dollar, with the exchange rate crossing the INR 81.5 mark this past week.

The heightened global uncertainty and negative sentiments have also made investors wary of writing big cheques, which has impacted startup funding in the country. But as we can see above, there’s no lack of actual dry powder or uncommitted capital in India.

In 2022, funds worth $16 Bn have either been refreshed or launched, which is 2.6X the new funds launched in 2021, when $42 Bn was invested into startups. The multi-year horizon for VC funds means that even a lull of six to nine months may not change the overall returns outlook. However, the fact that many of them are taking longer to close deals — particularly due to the higher scrutiny on due diligence — many startups that are in need of funds might exhaust their runway.

Whether the worsening of the funding winter results in startups shutting down is yet to be seen, but at least one senior Mumbai-based growth-stage investor believes that layoffs might continue in sensitive sectors such as edtech and consumer services, where automation will take hold as part of cash conservation.

Over the past year, investors have claimed that the downturn is more of a ‘correction’ than a ‘slowdown’. However, what worries us most is the fact that in October 2022, we are at the same level as October 2020.

Essentially, the correction in the market has brought us back to the same level as the so-called ‘Black Swan’ event of Covid. The bluster and hype of 2021 seems quaint now and unicorns might well find themselves out of the club due to the fall of rupee in comparison to the dollar.

So is it possible that perhaps the enthusiasm of VCs, startup founders and the entire startup ecosystem after the past year was a case of missing the forest for the trees? 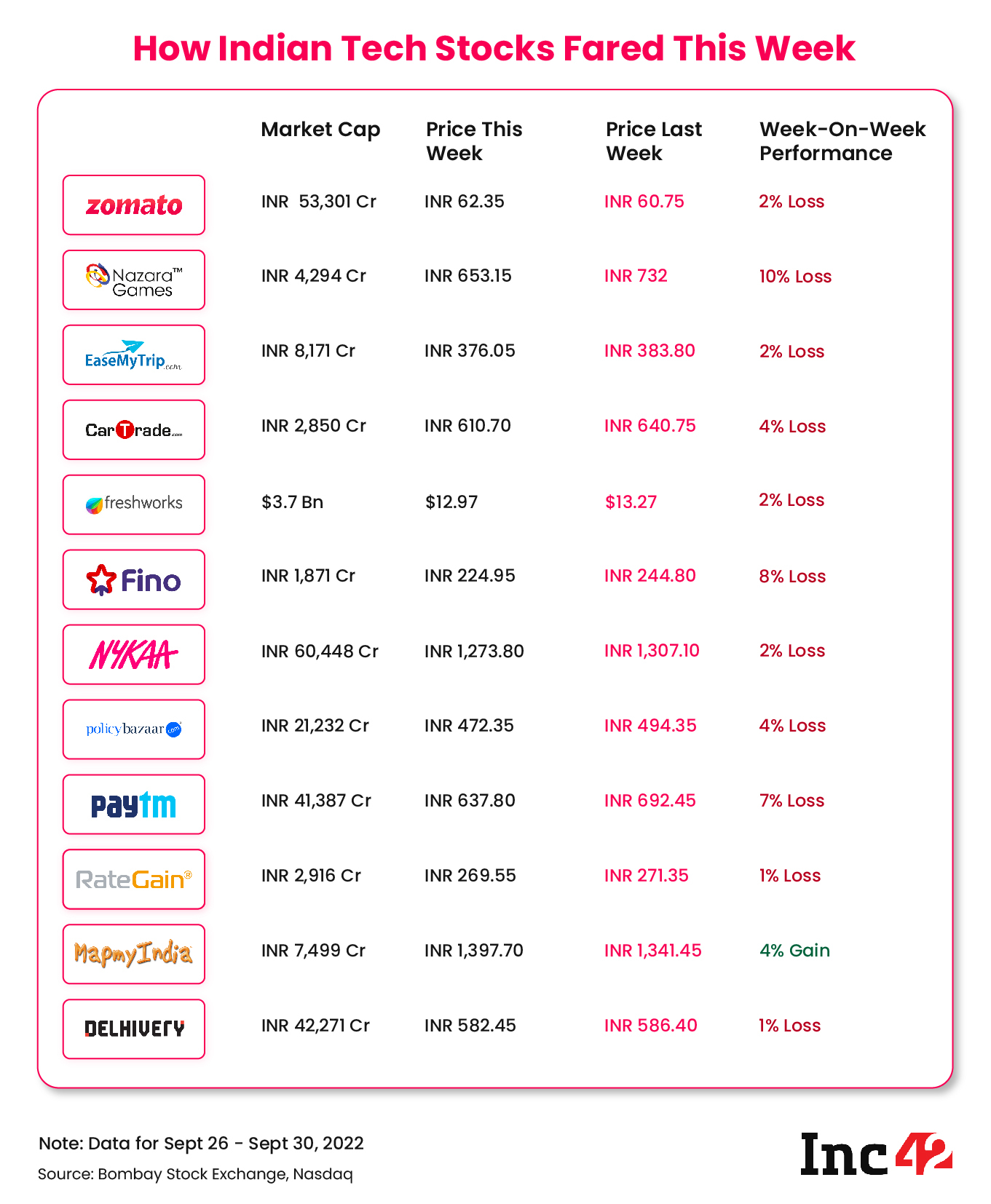 That’s all for this Sunday.  Stay tuned for another roundup of the week’s highlight next week.