The Why, How And What Of India’s Digital Currency “Introduction of Central Bank Digital Currency (CBDC) will give a big boost to the digital economy. Digital currency will also lead to a more efficient and cheaper currency management system. It is, therefore, proposed to introduce Digital Rupee, using blockchain and other technologies, to be issued by the Reserve Bank of India starting 2022-23,” – FM Nirmala Sitharaman

However, as UPI payments have become a synonym for digital payments in India, a good section of the population still had one doubt which eventually became a topic of discussion at the dinner tables:

“But, we have been making payments digitally, right? So, why do we need something called Central Bank Digital Currency (CBDC)?”

What is CBDC? How CBDCs are different from the existing form of e-money? Why do we need CBDC when there is UPI? This and many other questions have been among the most Googled questions on CBDC since the Budget speech by the finance minister.

Before rolling deep into the CBDC, it is important to clear these confusions first.

So, What Is CBDC?

“The history of money is entering a new chapter. Countries are seeking to preserve key aspects of their traditional monetary and financial systems while experimenting with new digital forms of money,” – Kristalina Georgieva, managing director, IMF on CBDC

Just like the rupee notes, a paper contract in which the RBI governor promises to pay the bearer the mentioned amount, a CBDC is defined as the legal tender issued by a central bank in a digital form.

“It is the same as a fiat currency and is exchangeable one-to-one with the fiat currency. Only its form is different,” says deputy governor of RBI T Rabi Shankar. 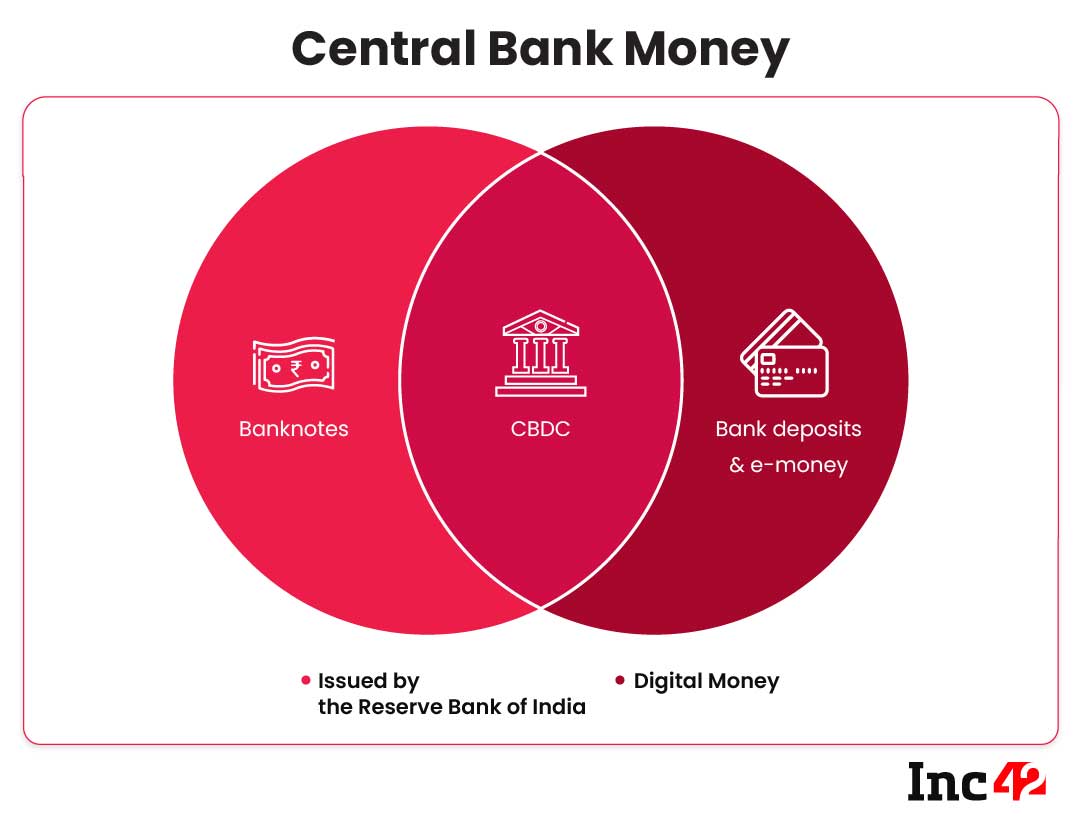 CBDCs can be used for retail, wholesale and international payments. 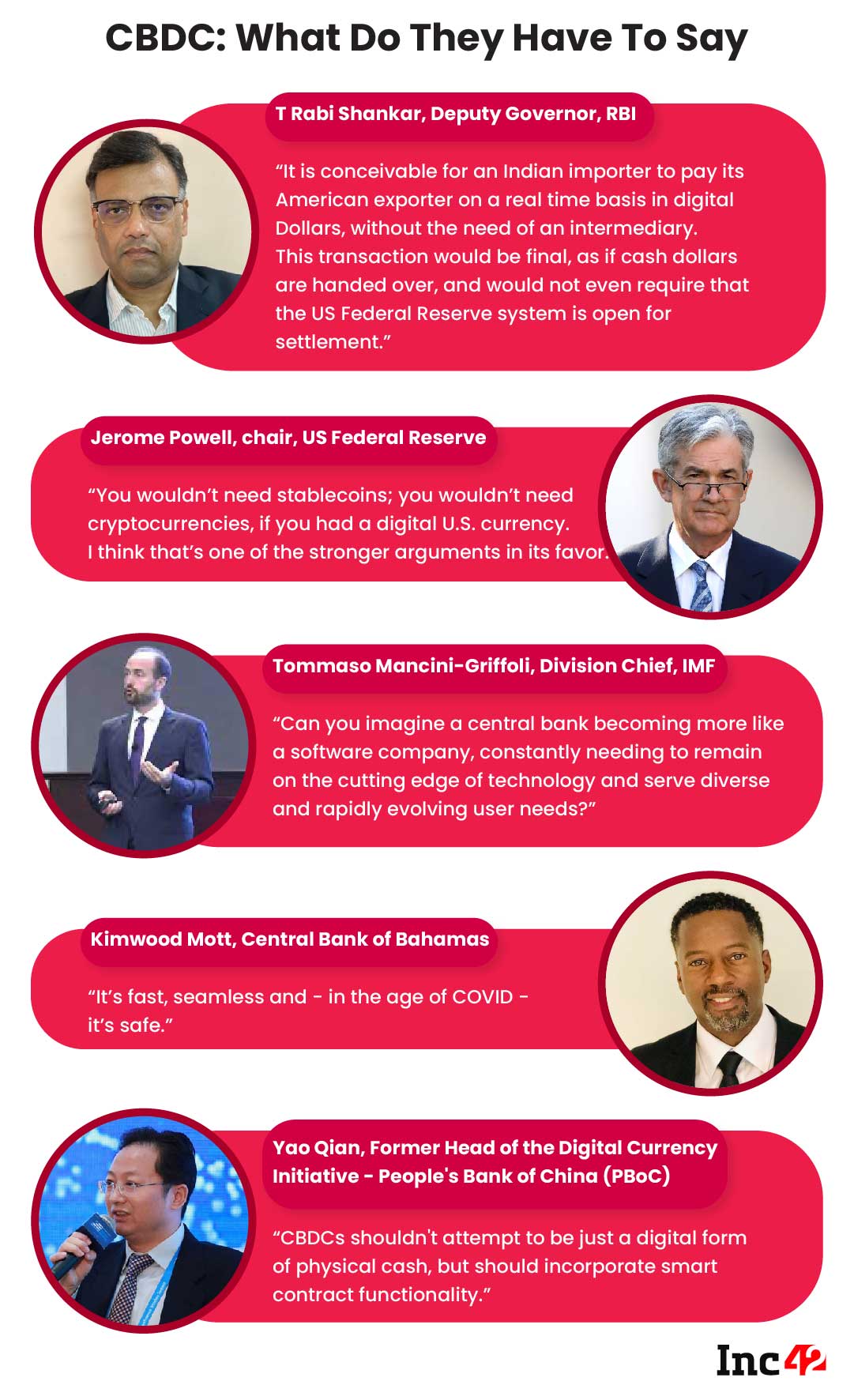 The Big Question: How CBDCs Are Different From The Existing Electronic Payments

In metro cities, most of us have been making payments digitally. These include a wide range of electronic payments such as UPI, wallet to wallet, NEFT, IMPS and RTGS. In such a scenario, the question is, how CBDCs are different from the digital money that we have been already accustomed to using?

In all the existing formats of digital payments, banking solutions have been at the core. You need a bank account to transfer the money from one account to another. Even in the case of wallets, cards and UPI payments, an account is a must. The liability of these account transfers lies with the corresponding commercial banks.

Similarly, when banks pay each other, they pay in reserves from accounts with the RBI. However, consumers can’t make direct transactions where the liability lies with the Central Bank until and unless it’s physical cash.

In the case of CBDC, the liability will be that of the Central Banks (or RBI in India’s case). One may not need to have a bank account to make digital payments as they do in the case of existing digital transactions.

CBDC is aimed at enriching access to digital payments.

Explaining the need for CBDCs, Sharad Sharma, cofounder of India’s software product industry think tank iSPIRT Foundation, said that many people are looking at this new money ledger to get frictionless payments that are inexpensive and secure.

In such a scenario, does India really need to have CBDC?

Deputy governor Shankar elucidated that there is a unique scenario of the increasing proliferation of digital payments in the country coupled with a sustained interest in cash usage, especially for small value transactions. To the extent the preference for cash represents a discomfort for digital modes of payment, CBDC is unlikely to replace such cash usage. But if we talk about the reasons such as anonymity, preference for cash for its anonymity can be redirected to acceptance of CBDC.

“India’s high currency to GDP ratio holds out another benefit of CBDCs. To the extent large cash usage can be replaced by CBDCs, the cost of printing, transporting, storing and distributing currency can be reduced,” Shankar added.

Shankar has also stated that the rise of cryptocurrencies can be another good reason for India to adopt CBDCs. With CBDCs being stable as fiat currencies, “It could also protect the public from the abnormal level of volatility some of these crypto experience. Indeed, this could be the key factor nudging central banks from considering CBDCs as a secure and stable form of digital money,” he argued.

How Would A CBDC Transaction Typically Work?

According to IMF, CBDCs could be operated by a central bank in three ways. “Payments using CBDCs are final and thus reduce settlement risk in the financial system. Imagine a UPI system where CBDC is transacted instead of bank balances, as if cash is handed over – the need for interbank settlement disappears,” RBI’s Shankar explained.

While most of the CBDCs are still under the research phase or development phase, let’s understand the China Model of CBDC which was launched for trials in April 2020. 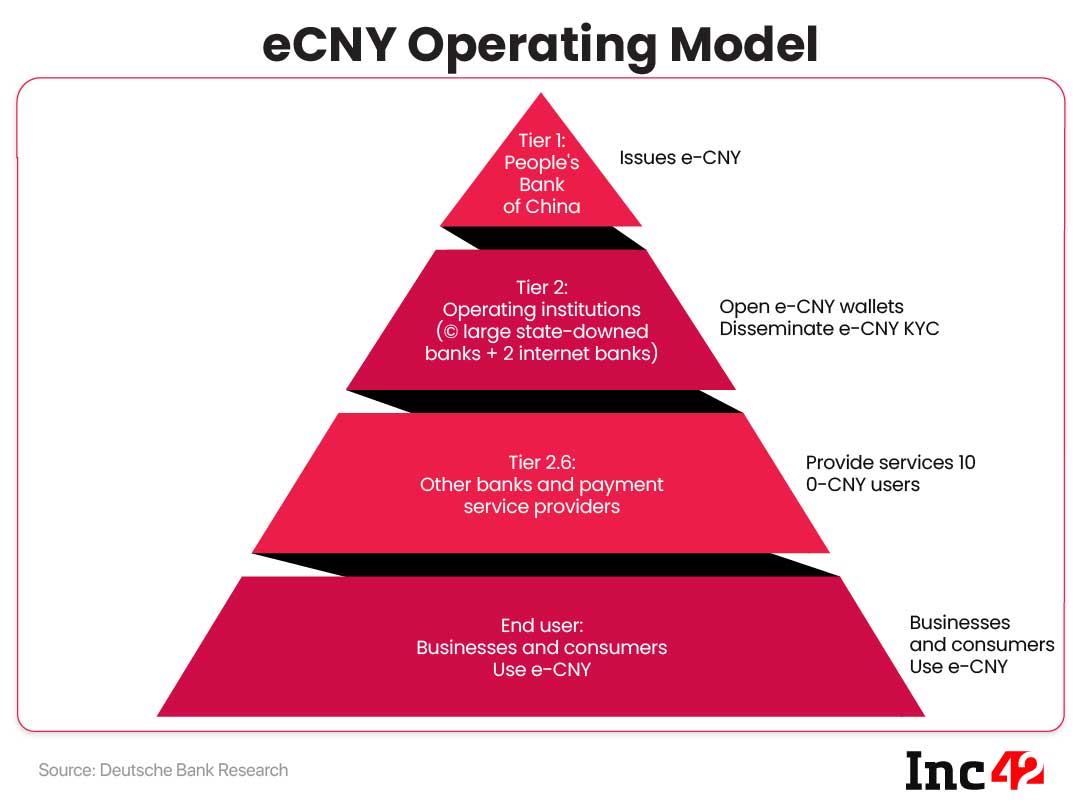 China has introduced intermediated CBDC where the People’s Bank of China (PBoC) is at the top level and monitors and controls the entire CBDC flow. eCNY is disbursed through accounts/digital wallets and hence a user will have to first go to tier 2 companies to open a digital wallet.

Once the wallet is made, a wide range of features have been incorporated into the wallets which the users avail by using peer to peer eCNY transfers.

The eCNY transactions can be done offline as well as online.

Where Does India Stand In The Global CBDC Race

There are essentially five categories under which the countries can be classified based on their current stage:

India belongs to the third stage, along with the likes of Russia, Israel, Japan and Australia. The US and 39 other countries still fall into the research stage. While The Bahamas has launched the world’s first CBDC called Sand Dollar in October 2020, a year later, Nigeria too launched CBDC called e-Naira. All the nine countries that have launched CBDC are very small in comparison to countries like India which has one-sixth of the world population and hence need scalability and speed as the basic requirements for CBDC.

Among the notable countries that have been piloting CBDCs are China, Sweden, Saudi Arabia, South Africa, South Korea, Malaysia, Singapore, Thailand and UAE.

Besides, European Central Bank is also working on developing a digital euro, a CBDC for Europe.

Meanwhile, China has already distributed e-Yuan to over 260 Mn users so far and is expected to launch CBDC anytime, this year. 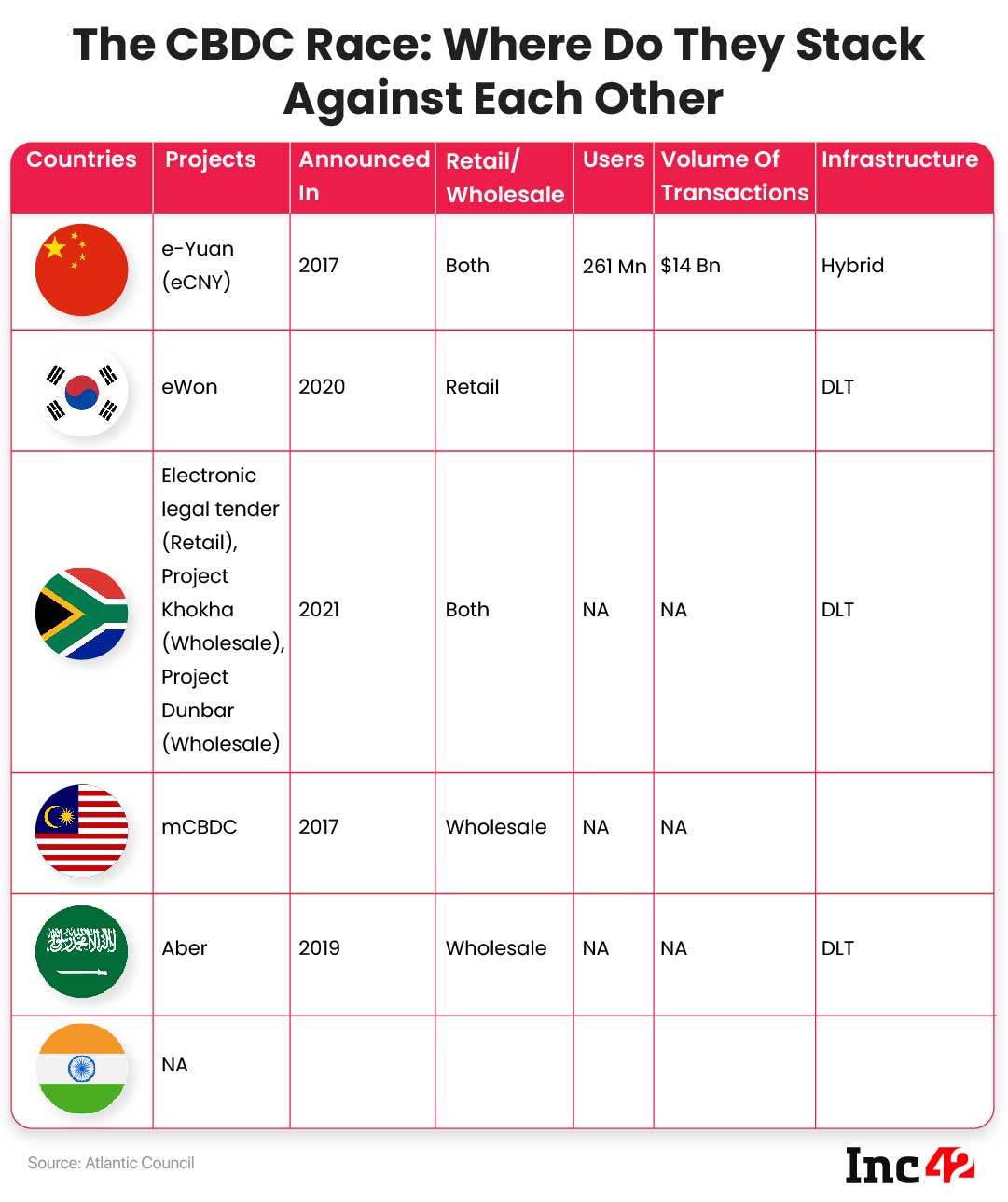 Multiple countries such as Australia, Singapore, Malaysia and South Africa have joined hands with BIS to work on interoperability. The countries have jointly launched the project Dunbar to enable cross border payments.

Does India Need CBDC For Wholesale Or Retail Payments?

CBDC can be used either for retail payments or for wholesale payments. Retail CBDCs are issued for the general public / non-banking entities. If based on DLT, retail CBDCs are expected to be safer and will have features like anonymity and traceability, similar to cryptocurrencies.

How Does India Plan To Achieve The Goal?

Focusing on the CBDC, the RBI, in 2021, had launched a new separate department called Fintech Department which has been looking into the project CBDC and its execution. Launched in 2018, the department functioned as a division under the Department of Payments and Settlement, earlier.

“As we are on the cusp of fintech revolution, there remains a host of issues such as faster, better and secure way of cross-border transactions, a larger focus on DLT (Distributed ledger technoogy) applicability, securing consumer data and privacy and so on.”

The official who didn’t wish to be named confirmed that India’s CBDC will be based on DLT infrastructure.

Sources close to the project told Inc42 that NPCI will also be actively assisting the RBI on the CBDC project. For the tech expertise, IIT Bombay and iSPIRT Foundation could also be brought into the loop to bridge the technology gap. However, the officials neither denied nor confirmed the news to Inc42.

The RBI has not officially announced any of these developments so far. The Bank has also not announced the technology partner for the development and execution.

It is worth noting that iSPIRT Foundation had earlier launched BADAL (Bharat Distributed Ledger), a protocol for accelerating and establishing trust for Indian B2B commerce. The BADAL protocol uses a new private-public ledger (PPL) ledger substrate that Sharma.