Mukesh Ambani’s digital ambitions show no signs of slowing as Reliance has backed Dunzo in a major way.

The investment has been speculated for months and is the opening salvo for Reliance’s plans in 2022, which will undoubtedly hinge around adding more services before the 5G assault. More on that in a bit.

Here are two stories that caught our attention in the first week of 2022.

What Reliance wants, Reliance gets. After acquiring JustDial and Milkbasket last year, Reliance has now taken a big chunk of Dunzo through Reliance Retail. The company has invested $200 Mn for a 25.8% stake in the hyperlocal deliveries startup.

The investment is part of a $250 Mn round and has pushed Dunzo closer to the unicorn club with its current valuation close to $775 Mn. Dunzo will enable hyperlocal logistics for the retail stores operated by Reliance Retail. It will also facilitate last mile deliveries for JioMart’s merchant network.

✨ Ambani’s Shiny New Toy: While it’s not a full acquisition, Reliance’s investment is seen as a precursor to one, similar to how Zomato invested in Grofers (Blinkit). For now though, the investment is expected to drive JioMart’s ambitions to take on Amazon and Flipkart in the ecommerce game.

Dunzo will also be critical to any quick commerce ambitions that Reliance has, which is proving to be a key battleground for big tech companies. It’s the latest addition to the ecosystem of platforms such as Urban Ladder, Netmeds, Zivame, Milkbasket and others that fit into the Reliance plan.

🤔 What’s In It For Dunzo? The Bengaluru-based startup will look to strengthen its position in the growing quick commerce segment as competitors such as Blinkit, Zepto, Swiggy and others look to capitalise on the momentum for this category. As per a RedSeer report, the quick commerce market in India is expected to reach $5 Bn by 2025 from the current $0.3 Bn.

Dunzo has launched dark store-enabled deliveries in Bengaluru and presumably, this will be extended to other cities with the funds raised. Besides this, it will also expand its B2B business vertical to enable logistics for local merchants in Indian cities.

The Big Picture: With 5G slated to launch later this year, Reliance would be keen to get its ducks in a row when it comes to services and products. It will also be looking to bring them together in a cohesive way before the big 5G launch takes centre stage.

The Dunzo and JustDial deals have enabled Reliance to lay down the digital foundation to go with its offline retail reach.

The conglomerate also has to deal with competition from Tata Group which will launch TataNeu this year after several acquisitions of its own in 2021. Besides Dunzo and 5G, the other big expectation for Reliance will be that it can wrap up the Future Group deal, which will allow it to truly extend its retail reach.

With quite a few tech startups lining up to hit the public markets in 2022, market analysts are bullish about the prospective IPOs in the year ahead, despite grave concerns of a resurgent Covid-19 and the Omicron variant, as well as fears of a correction after a bullish 2021.

Manan Doshi, cofounder of unlisted securities trading platform Unlisted Arena, said, “Post a weak listing of Paytm due to high valuation, now companies have turned a bit conservative regarding valuations and hence we should be seeing good listings in the year ahead. The pipeline of IPOs, including those of startups is quite strong and the outlook for these offers also is positive.”

Here’s the weekly performance of listed tech companies in the first week of the new year: 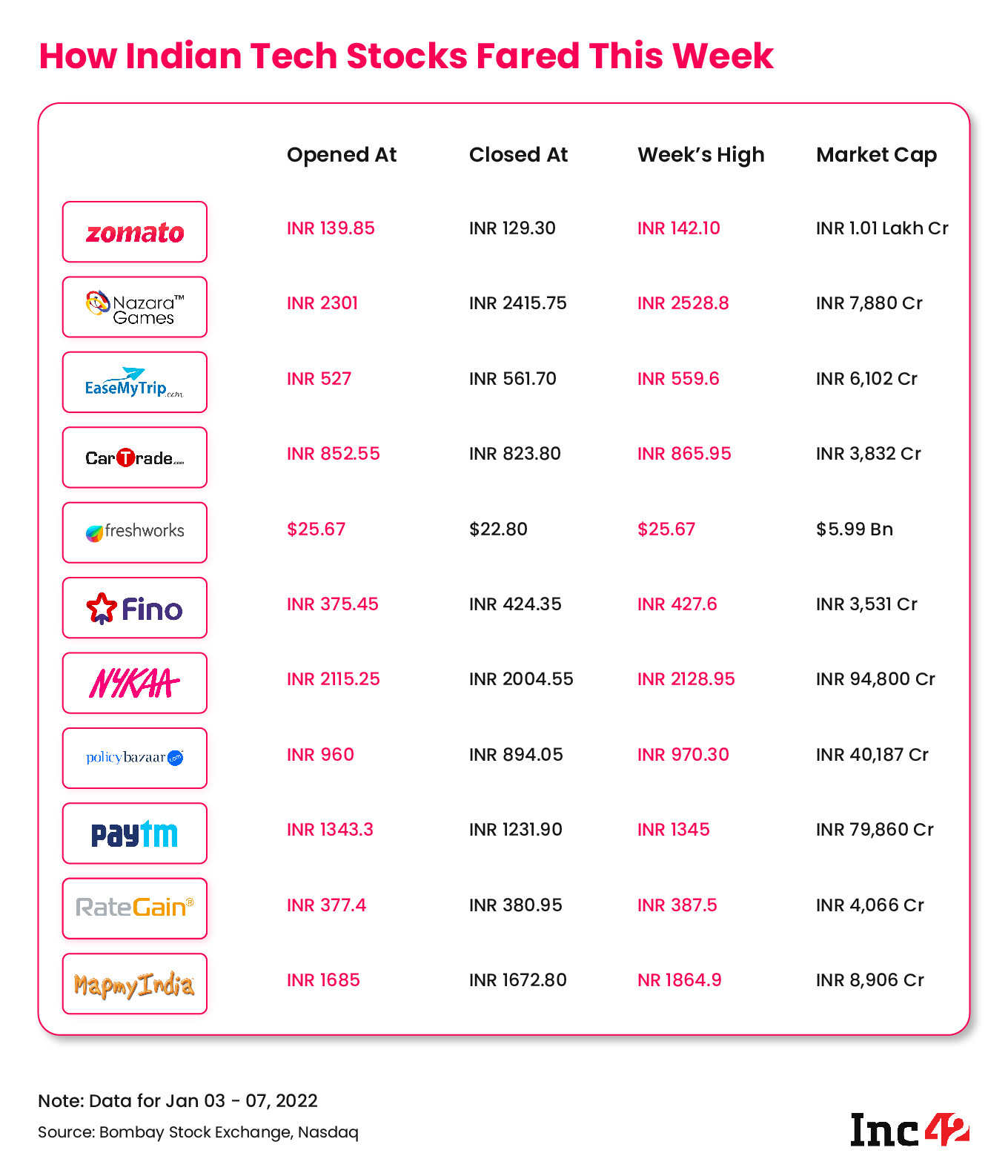 Diving Into A Record-Breaking 2021

Moreover, with 1,436 startups launched in calendar year 2021, the count of new startups grew by 15%. And India now has over 73 soonicorns, many of which have emerged in the past 2-3 years. Watch out for more breakdowns of 2021’s historic funding boom through the week.

That’s all for this week, folks. See you next Sunday with another weekly wrap-up.