I am sure unicorns will emerge from our AYUSH startups very soon: PM Modi 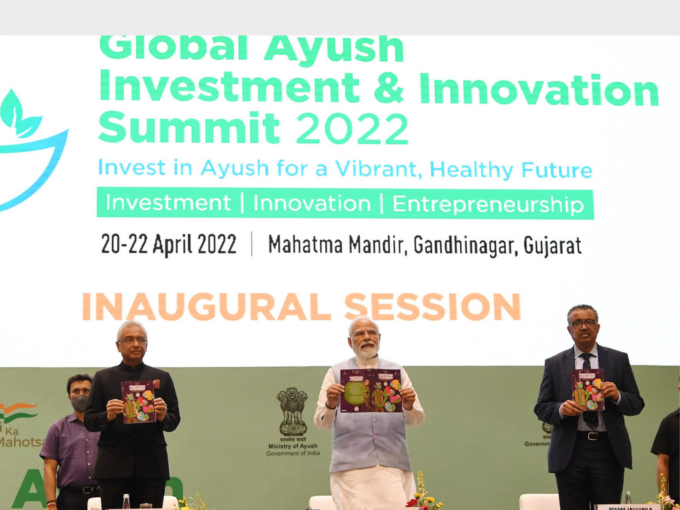 Speaking at the inaugural session of the Global AYUSH Investment and Innovation Summit 2022 in Gujarat’s Gandhinagar, Modi said,  “We are already witnessing unprecedented growth in the production of AYUSH medicines, supplements and cosmetics. In 2014, where the Ayush sector was less than $3 Bn, today it has increased to more than $18 Bn.”

Pointing to the growing numbers of unicorns in the country, the prime minister further said, “I am sure unicorns will emerge from our AYUSH startups very soon.”

The three-day summit will see entrepreneurs and other industry stakeholders engage in dialogue to encourage the traditional forms of medicine in the country. The event will also help uncover investment potential in the space and ways to ramp up innovation in the wellness industry.

PM Modi also highlighted the steps taken by the government in the past few years to promote export of AYUSH products. He said more than 50 Memorandums of Understanding (MoUs) have been signed with many countries. “Our AYUSH experts are developing ISO standards in collaboration with the Bureau of Indian Standards. This will open a huge export market for AYUSH in more than 150 countries”, he said.

The prime minister also announced a slew of schemes for the sector, including unveiling of the AYUSH mark for traditional medicine products. In addition, the Centre will also develop a network of AYUSH parks to encourage manufacturing of such products across the country.

The move is part of the government’s overarching bid to promote traditional forms of medicine. Earlier in 2014, the Indian government had approached the United Nations to celebrate yoga globally. The move was accepted by the global body and, as a result, June 21 is celebrated as the International Yoga Day.

In addition,the Ministry of AYUSH has also embarked on a slew of reforms. Last year, it introduced an online application system to streamline the process of granting licences to manufacture traditional medicines. Apart from that, Ayurveda departments will be opened in as many as 19 All India Institutes of Medical Sciences (AIIMS) to promote the traditional forms of medicines.

The sector has grown tremendously in the last couple of years. Buoyed by the COVID-19 pandemic, the alternate forms of medicine have witnessed a huge spurt in adoption. From food ingredients to immunity boosters, the AYUSH sector has been welcomed by Indian masses in a big way.

In this year’s Budget, the government allocated INR 3,050 Cr for the Ministry of AYUSH to promote traditional medicine systems in the country.