Modi added that the country’s unicorns have a faster average growth rate than the likes of the US, UK and others

The PM also said that the country’s unicorns are diversifying, working in fields such as ecommerce, fintech, edtech and so on

Today’s Mann Ki Baat, the monthly address from Prime Minister Narendra Modi, was all about India’s 100 unicorns, as he lauded the country’s startup ecosystem for achieving the milestone.

“A few days back, our country achieved such a milestone that inspires us all and gives us renewed confidence in India’s abilities,” Modi said. Comparing a “century” in cricketing terms with the 100 unicorns, he added, “India has scored a century in another area, which is quite unique.”

“On the 5th of this month, the number of unicorns in India reached the 100 mark,” Modi said. 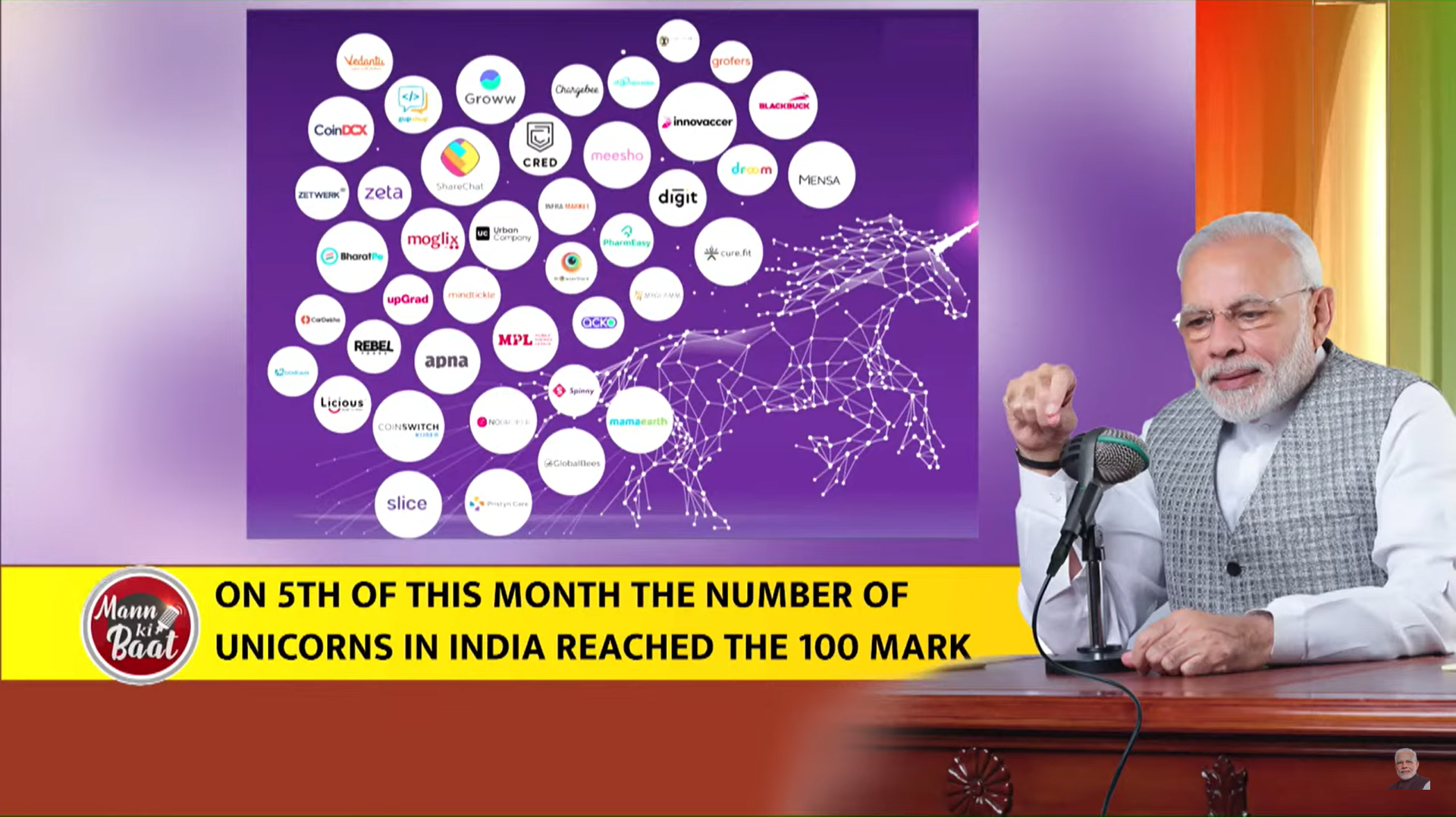 Speaking of the startup ecosystem in general, the PM said, “Another thing that I consider more important is that this world of startups reflects the spirit of new India.”

Modi said that India’s startup ecosystem is proliferating further into the country, and is not just limited to the metro cities of the country.  “Entrepreneurs and coming up from small cities and towns,” he said.

It should be mentioned here that the government has been bullish on pushing for a more evenly distributed startup ecosystem. As such, there have been multiple efforts from the government’s end to push for more startups to come from Tier 2+ cities. It is interesting to note, therefore, that nearly 50% of the recognised startups in India are from Tier 2 and 3 cities, according to the Ministry of Commerce and Industry.

Many government stakeholders have tipped these cities to become the next hotspots of India’s startup ecosystem. Recently, Rajeev Chandrasekhar, the Union Minister of State for Skill Development, Entrepreneurship, Electronics and Information Technology, had said that Tier 2+ cities will be the centre of the next wave of startups in India.

Addressing the multiple issues that have come up at some of India’s largest startups, Modi said that there is a need for proper guidance within the startup ecosystem. As such, he mentioned some of the startup founders who have “devoted themselves to mentoring India’s startups.”

Among these people, Modi mentioned Sridhar Vembu, founder, Zoho, speaking about how he is mentoring other entrepreneurs. The PM also said that Vembu is working to help rural entrepreneurs by working from a village as well, something that Vembu had brought up himself while speaking at The Makers’ Summit, 2022.

“It is a matter of great happiness for us that today there is a complete support system getting ready for startups in the country,” Modi said.

According to the Department for Promotion of Industry and Internal Trade (DPIIT), the country has 70,681 registered startups. Anurag Jain, Secretary, DPIIT, had recently said that around 80 startups are being registered daily in India. At the said run rate, the country is poised to hit 100,000 startups in around a year – 366 days to be precise.

India’s startup ecosystem started gaining momentum in the late 2000s, with the founding of some of India’s biggest startups such as Flipkart and Zomato. By 2011, India had seen its first unicorn in Info Edge.