Shares of Nazara plunged over 7%, while weak Q2 performance weighed on MapmyIndia, which saw a 4% fall in its share price

Amid Indian stock market seeing a largely positive sentiment this week, new-age tech stocks witnessed mixed performance on the bourses. While stocks like Nykaa and Delhivery, which were under pressure for the last few weeks, rebounded sharply this week, comparatively stable stocks like EaseMyTrip, MapmyIndia, and Nazara Technologies slumped.

Nykaa, after touching its record low of INR 975.50 last week, jumped over 12% this week to emerge as the biggest gainer among the new-age Indian tech stocks. On the other hand, Delhivery, which hit its record low at INR 341.65 this week, rebounded to end the week over 11% higher on a weekly basis.

However, the impending lock-in expiry for shares held by pre-IPO investors is expected to keep both the stocks volatile in the near term.

On the other hand, a lacklustre Q2 performance saw MapmyIndia’s shares fall over 4% on a weekly basis.

Meanwhile, traveltech startup EaseMyTrip’s shares fell for four straight sessions this week. On a weekly basis, the stock was down more than 3%, ending Friday’s session at INR 1,261.2 on the BSE.

While the lock-in expiry is also expected to keep Paytm volatile over the next few weeks, its shares remained largely range-bound this week and ended over 1% higher at INR 650.2 on the BSE.

Buoyed by positive macroeconomic numbers and robust Q2 numbers being reported by the corporate sector, the Indian stock markets performed well this week. The benchmark indices NSE Nifty50 and BSE Sensex rose 1.8% and 1.6%, ending Friday’s session at 18,117.15 and 60,950.36, respectively. In fact, Nifty50 and Sensex crossed the 18K and 60K marks, respectively, for the first time since mid-September.

“While the Indian economy is not completely insulated from the global challenges, the recent strong economic readings like robust GST collections, uptick in IIP numbers are indicating that things could turn for the better in the near to medium term,” said Amol Athawale, deputy vice president of technical research at Kotak Securities.

“Globally, traders are hoping that the pace of rate hikes by the major economies would soften going ahead, which would fuel fresh optimism for equity markets,” he added.

Now, let’s dig deeper into the weekly performance of some of the listed new-age tech stocks from the Indian startup ecosystem. 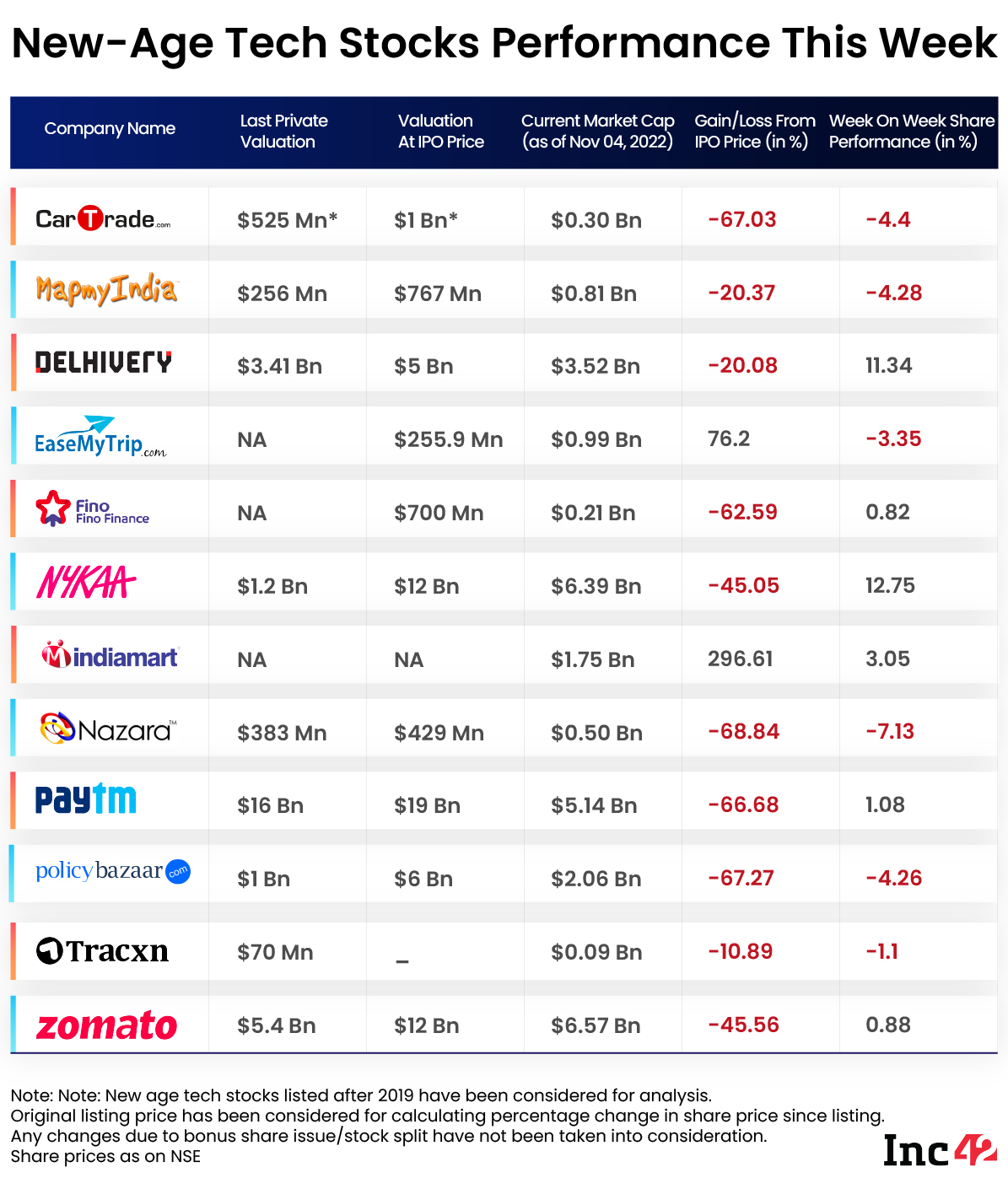 The 12 new-age tech stocks ended this week with a total market capitalisation of $28.33 Bn versus $27.19 Bn last week, led by a meaningful recovery in a few stocks. 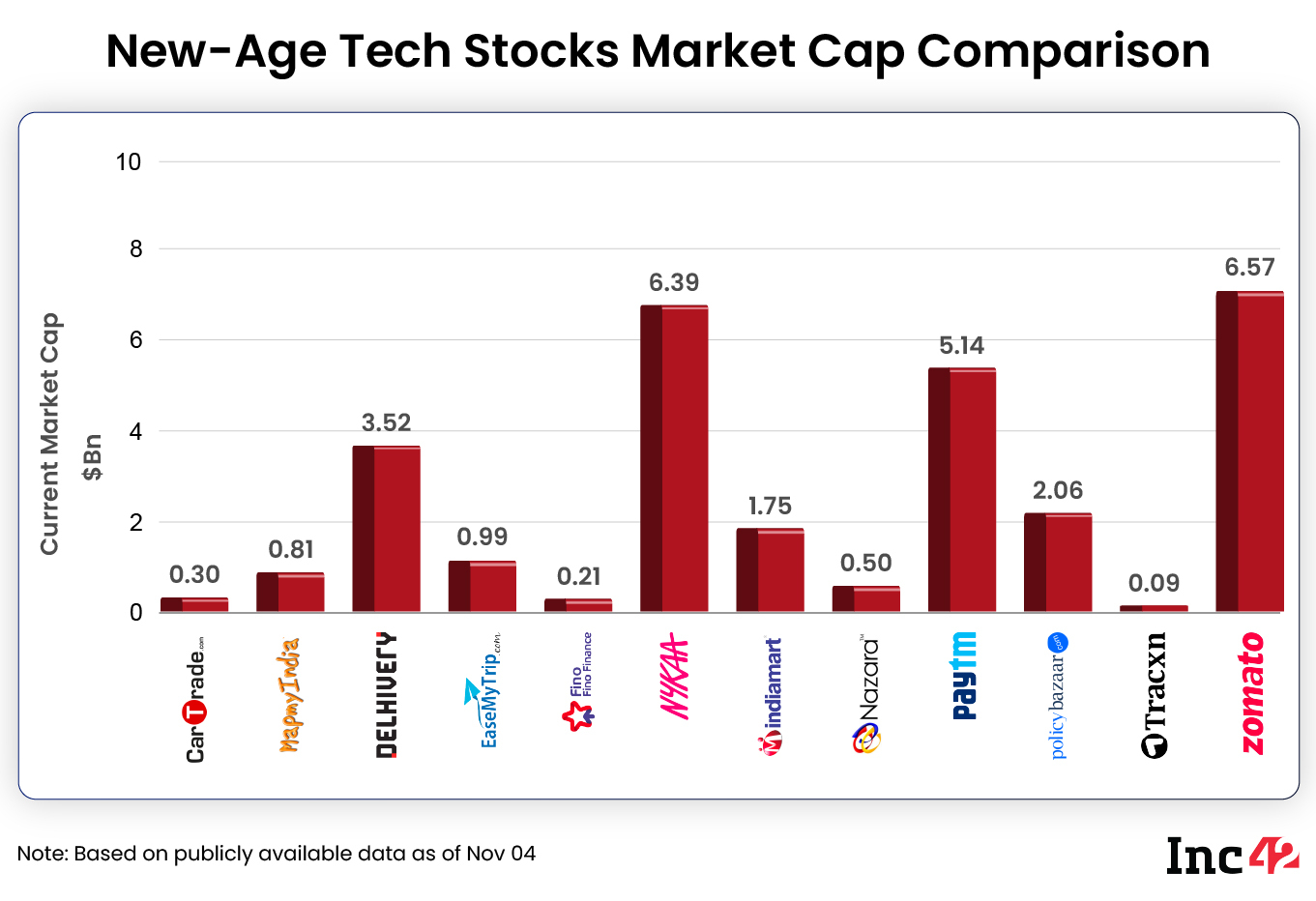 Nykaa Emerges As The Biggest Winner

Shares of Nykaa have been witnessing significant slump since the second week of October as its pre-IPO lock-in period is nearing its expiry this month. Though the volatility still remains ahead of the expiry on November 10, the stock recovered significantly this week.

Though Nykaa shares fell in the last three sessions of the week despite better-than-expected Q2 performance in most segments, the stock rose over 12% on a weekly basis. Nykaa shares ended Friday’s session at INR 1,104.7 on the BSE.

Nykaa has shown a good amount of recovery, especially helped by its results this week, said Narendra Solanki, head of fundamental research at Anand Rathi. Not just Nykaa, the tech stocks have overall faced severe difficulties in recent days due to the ongoing Russia-Ukraine war and Fed’s rate hikes, and it would take two to three quarters for this volatile situation to get stabilised, he added

Various other brokerages are also of the opinion that Nykaa would face more sell-offs after its lock-in expires, but they see the expected price drop as a good entry point for long-term investors. 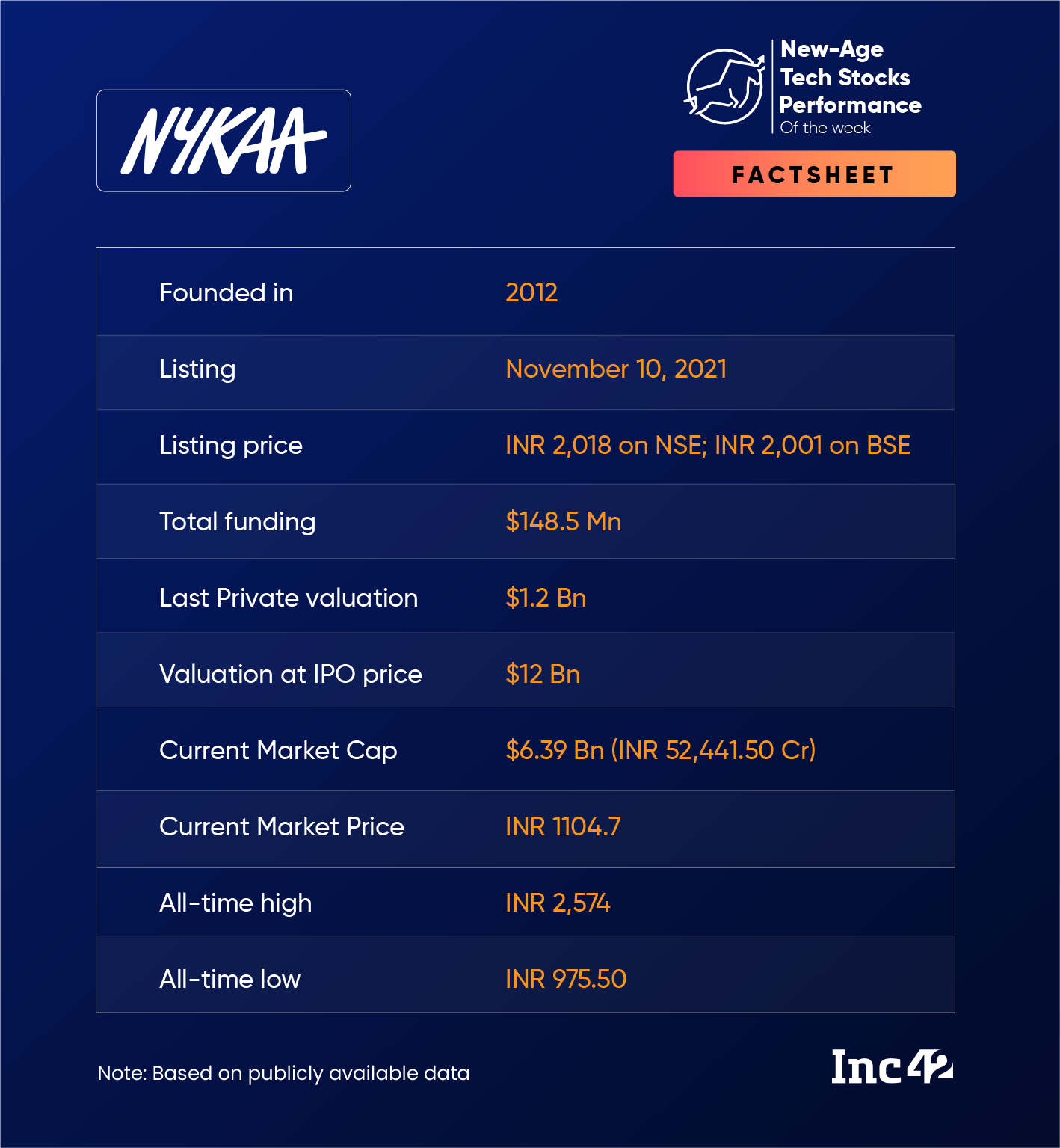 Shares of MapmyIndia slumped over 4% this week, ending Friday’s session at INR 1,261.2 as its weak Q2 performance weighed heavily on the stock. The digital mapping startup reported a consolidated profit after tax (PAT) of INR 25.37 Cr in the September quarter, almost flat compared to last year’s profit of INR 25.39 Cr.

Despite this, brokerage Monarch Networth Capital increased its price target on the startup to INR 1,710 from INR 1,650 earlier, which implies an upside of 35.6% to the stock’s last close.

“Given MMI’s (MapmyIndia’s) positioning in the industry, impetus on accurate data (key criteria), asset-light model and healthy financials we believe premium valuations should sustain and continue to remain positive on MMI’s long-term prospects,” MNCL’s analyst said in a research note.

The brokerage believes that MapmyIndia has all the ingredients to sustainably command premium valuation due to its unique place in a niche operating segment, market leadership in navigation solutions in India, strong business moat making it difficult to replicate, high operating margins, and strong balance sheet.

Anand Rathi’s Solanki also said that the brokerage has a positive stance on the stock. Overall, its business model is good and has clear advantages, which are not easily replicable and also act as a high entry barrier in order to enter the segment of map and navigation, Solanki said.

“The company should be able to witness 40% kind of revenue growth for the next two years,” he added. 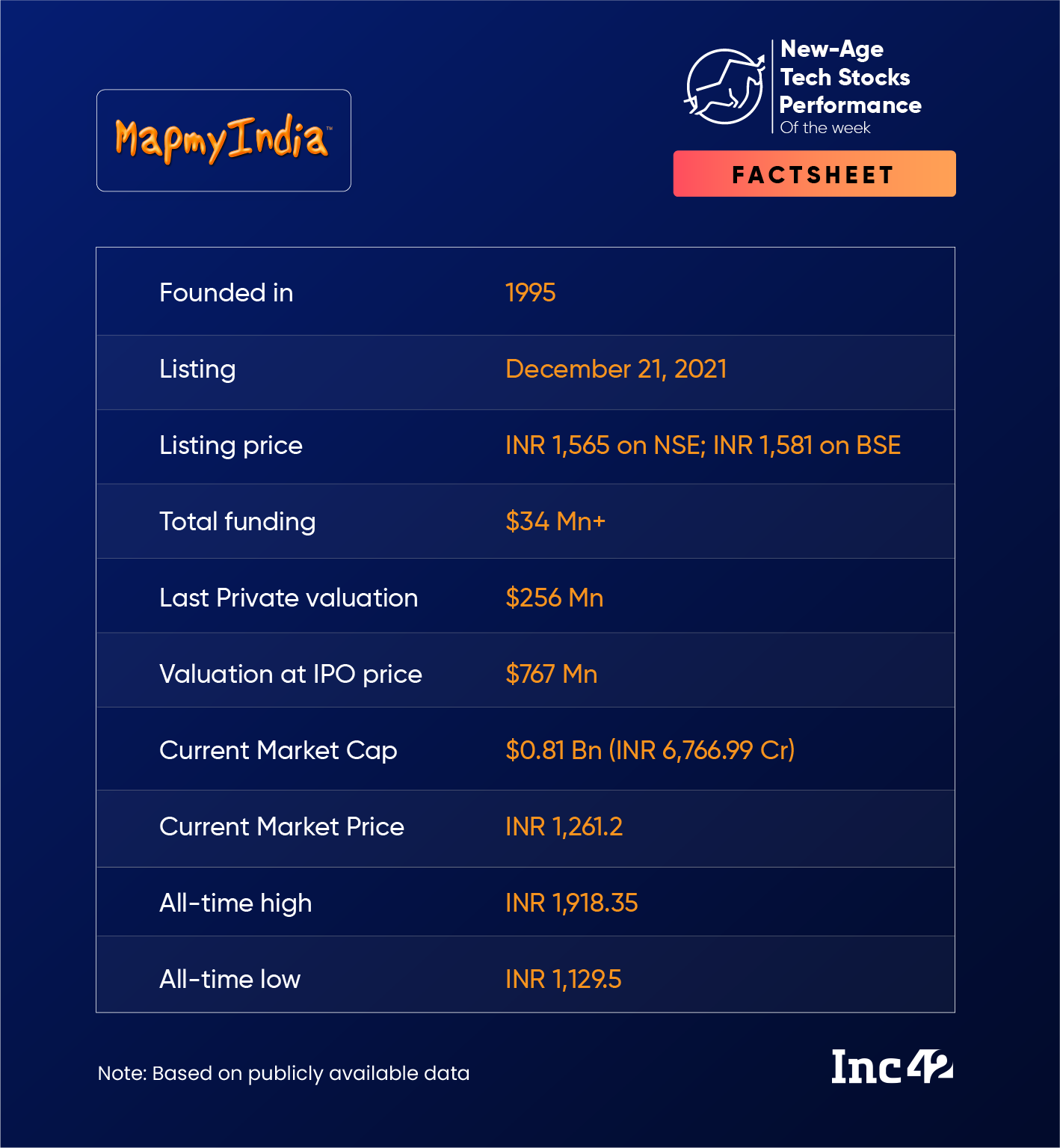 Gaming company Nazara Technologies was the biggest loser, falling over 7% this week. The stock fell for five consecutive sessions during the week, ending Friday’s session at INR 619.95.

Analysts are of the opinion that despite Nazara’s strong performance, the uncertain regulatory environment is keeping a check on its share price growth.

In fact, Nazara Technologies reported a 13.7% YoY increase in its net profit to INR 17.4 Cr in the September quarter, while the total revenue stood at INR 287 Cr.

There are also some changes ongoing at the management level as the company announced the resignation of its CEO Manish Agarwal last month, which will come into effect on December 1.

In terms of business model, Nazara Technologies is a good stock, Solanki said. While the stock price dip is driven by several factors such as the headwinds that the overall IT sector is facing which have led to valuation derating, there is also growing competition in the gaming segment and regulatory uncertainties that could be driving the share price decline, he added. 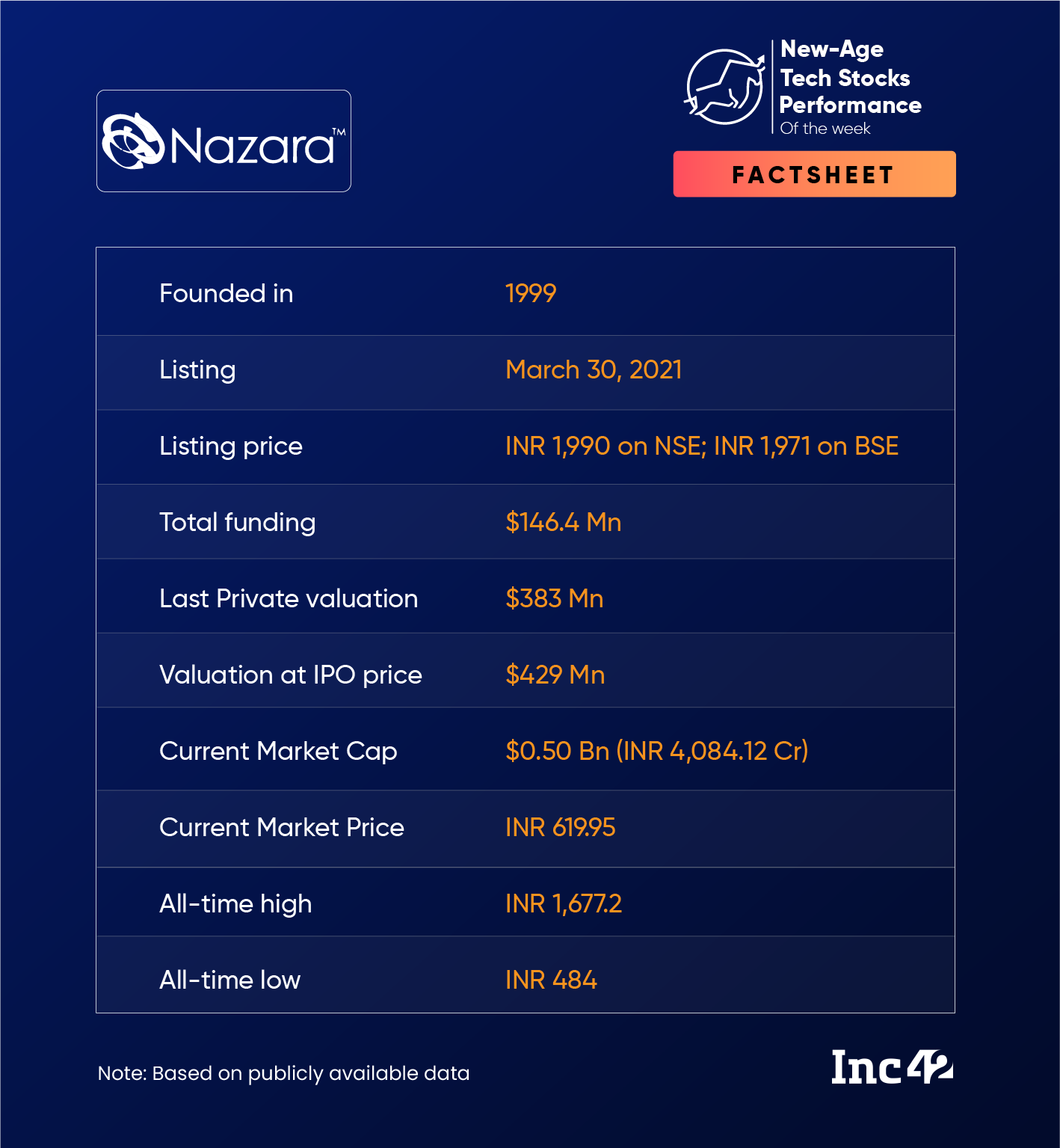