With Paytm’s lock-in expiry this week, its shares turned out to be the biggest loser, falling over 13% to INR 546.3 on the BSE

Benchmark indices NSE Nifty50 and BSE Sensex were also down marginally this week, ending Friday’s session at 18,307.65 and 61,663.48, respectively

After significant upward rallies in two consecutive weeks around the announcement of Q2 financial results, the Indian new-age tech stocks slumped this week. The overall Indian stock market remained volatile during the week.

With Paytm’s lock-in expiring this week, its shares turned out to be the biggest loser among the new-age tech stocks. The stock fell over 13% to INR 546.3 on the BSE. Zomato was the second biggest loser, falling 7.7% to INR 67.15 on the BSE.

All the other tech stocks – from Delhivery to the recently-listed Tracxn Technologies – fell between 4% to 7.5%. Policybazaar parent PB fintech was the only gainer this week, as it rose 0.9% to end the week at INR 402.8. On Friday alone, Policybazaar shares jumped about 8% from Thursday’s close.

Unlike its major peers, Policybazaar did not see any significant slump or sell-off despite the lock-in expiry. Amol Athawale, deputy vice president of technical research at Kotak Securities, said that Policybazaar is in a range-bound formation, but a fresh breakout is possible if it manages to trade above INR 405.

he slump in all the other tech stocks was majorly driven by the overall macroeconomic volatility, which has hurt tech stocks globally. However, the impending lock-in expiry next week could have played a major role in dragging down the share price of Delhivery. Nykaa also came under pressure as several of its pre-IPO shareholders dumped shares this week.

Avendus Capital Public Market Alternate Strategies LLP CEO Andrew Holland told another publication this week that the firm will be closely looking at Nykaa, Paytm, and Zomato in terms of their business models.

Now, let’s dig deeper into the weekly performance of some of the listed new-age tech stocks from the Indian startup ecosystem. 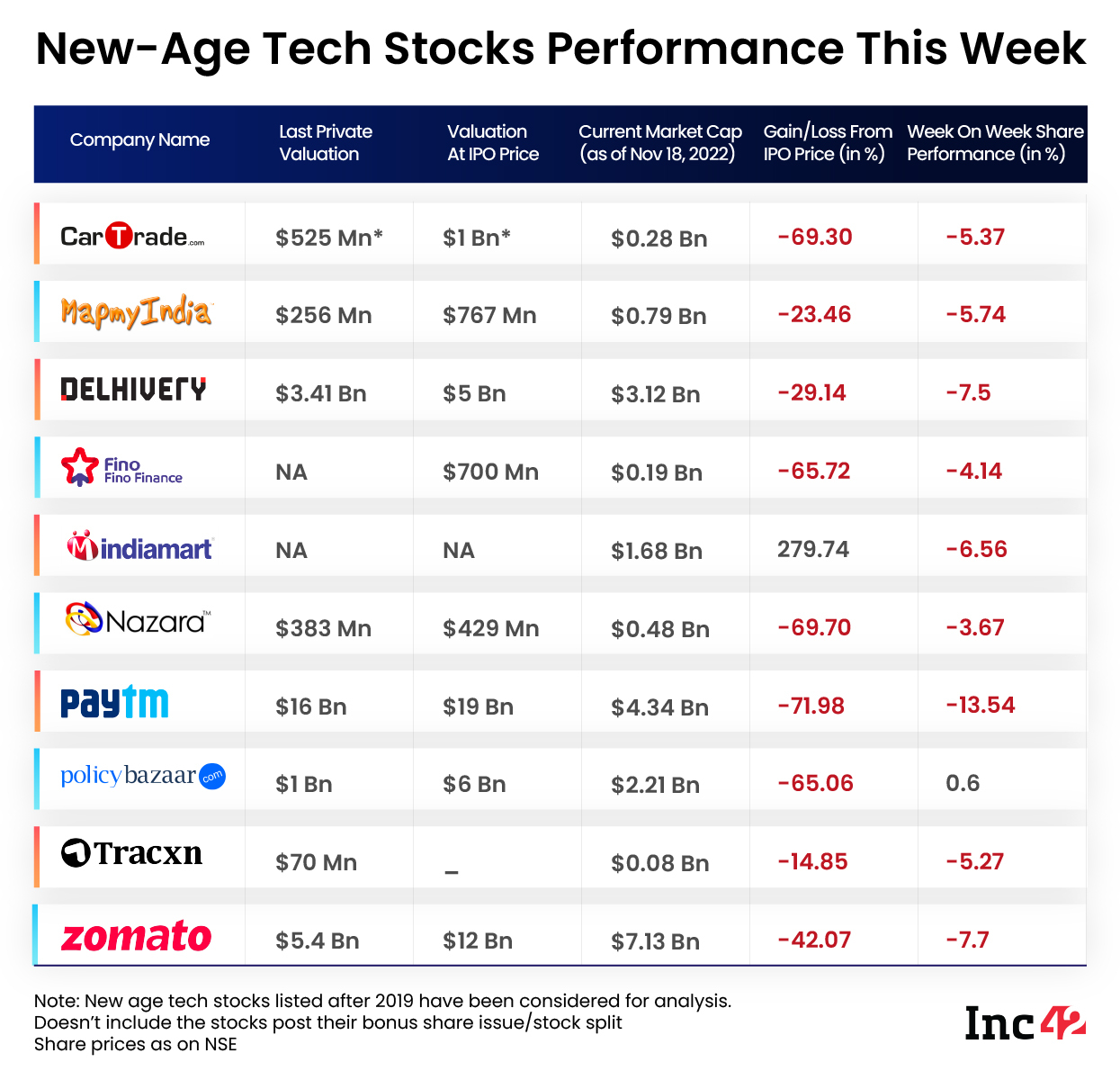 The 12 new-age tech stocks under our coverage ended this week with a total market capitalisation of $28.03 Bn versus $30.82 Bn last week. 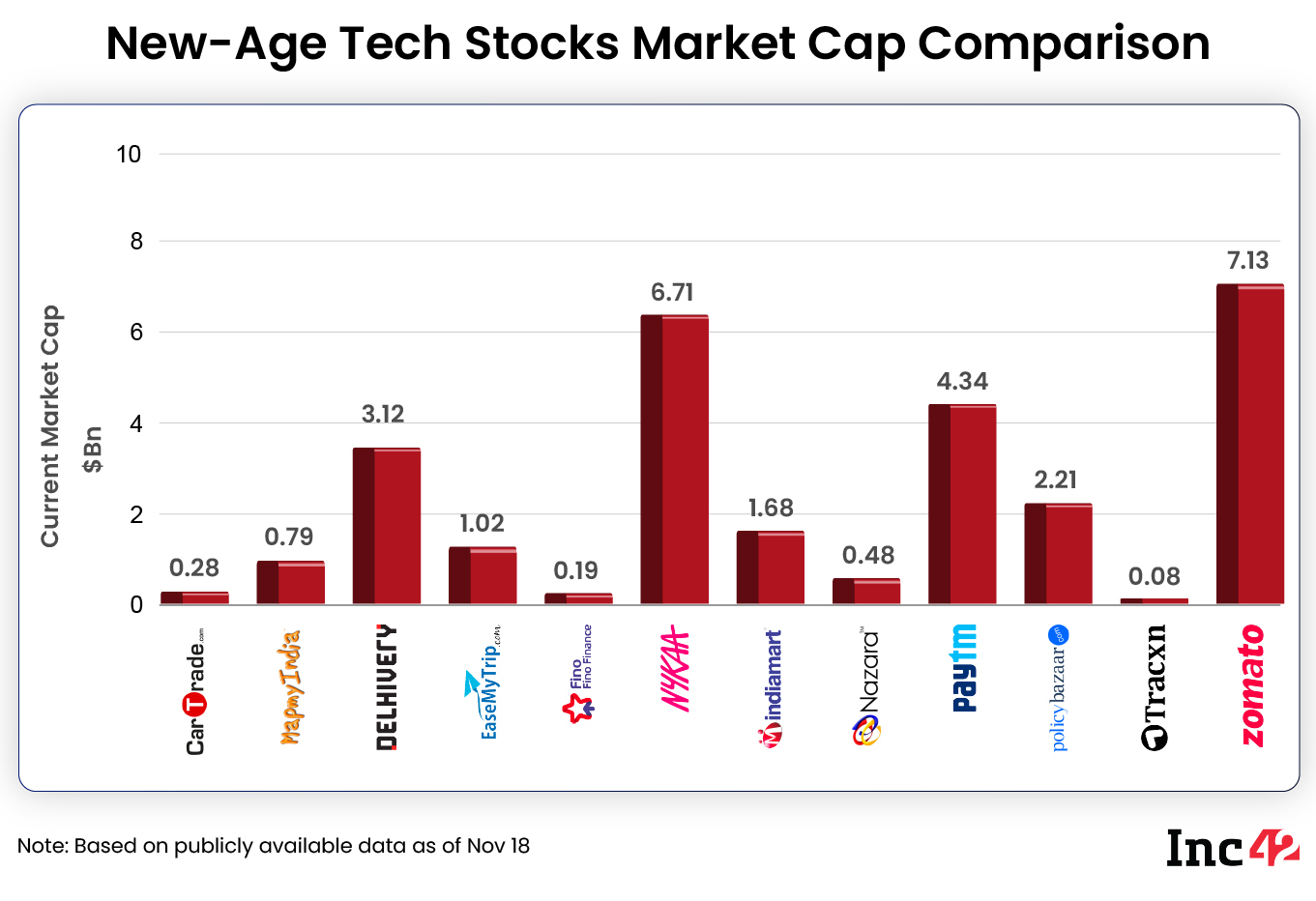 Shares of Paytm fell in three consecutive sessions this week as some of its pre-IPO shareholders, including SoftBank, dumped the shares with the 12-month lock-in period ending by November 18.

Paytm shares were down 13% to INR 546.3 on the BSE this week. However, the shares rose over 1% from Thursday’s close on Friday.

Despite the ongoing volatility in its stocks, several brokerages have reiterated their bullish stance on Paytm in the recent days.

Paytm’s texture is still weak because of lower top formation, but it is oversold in the short-term timeframe, said Kotak Securities’ Athawale.

“There is a possibility of a pullback rally if the stock succeeds to trade above INR 560, which could be the immediate resistance zone. Below the same, the stock is likely to trade with a negative bias,” he said.

On the lower side, INR 520 and INR 500 would be the immediate support for the stock, Athawale added. 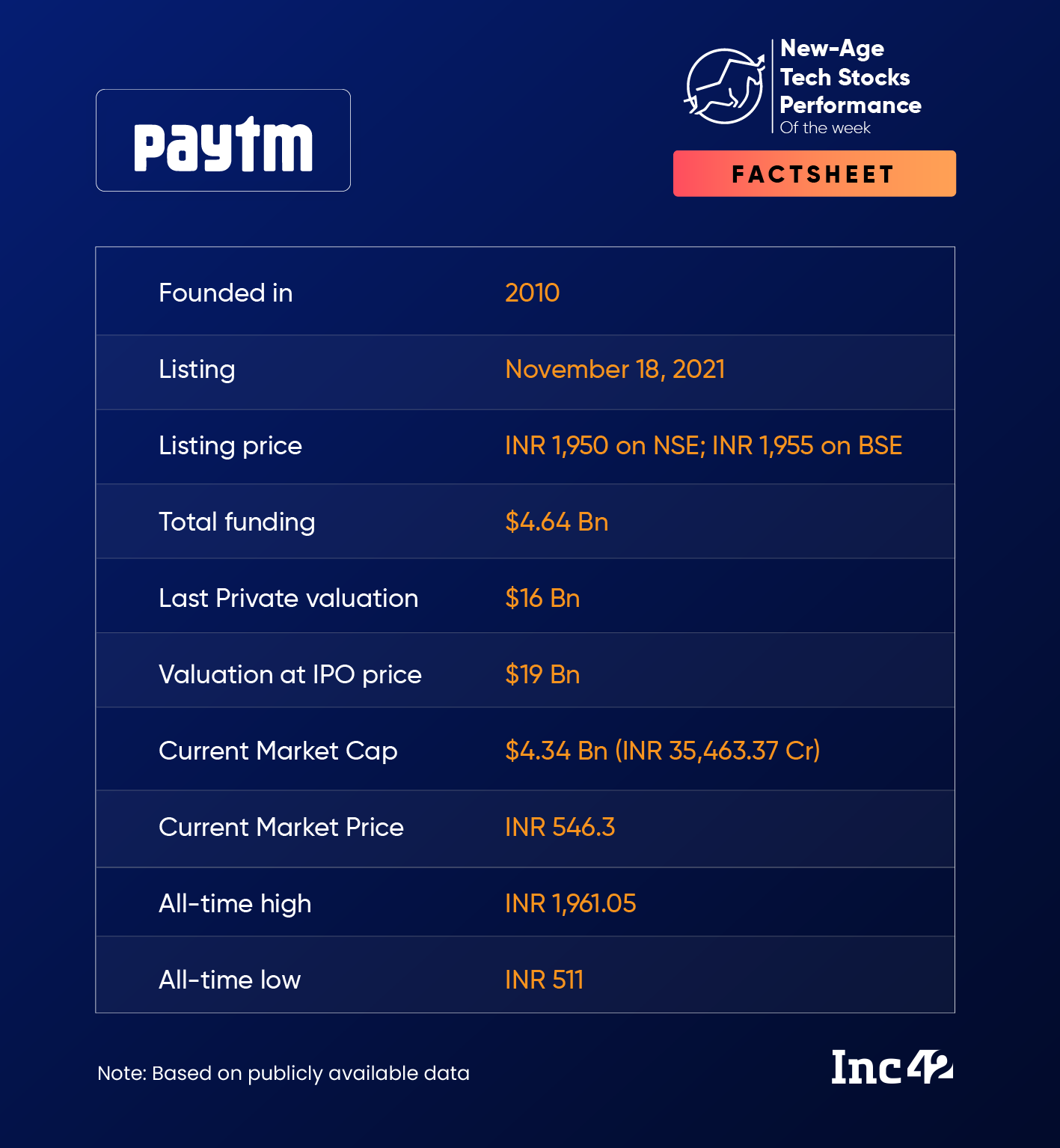 Nykaa Slumps After A Stellar Week

While Nykaa’s 5:1 bonus share issue cushioned it from any sell-off on the expiry of its lock-in period last week, the stock plunged significantly in two straight sessions as its pre-IPO shareholders started dumping stocks after the bonus shares were credited to its shareholders’ demat accounts mid-week.

The shares fell about 7.5% this week, ending Friday’s session at INR 192.45 on the BSE. However, they recovered a bit on Friday, ending the session 3.7% higher compared to Thursday’s close.

Nykaa shares have now formed a range with higher side at INR 220 and lower side at INR 170. Looking at the current scenario, the stock is likely to trade within a range, said Athawale. 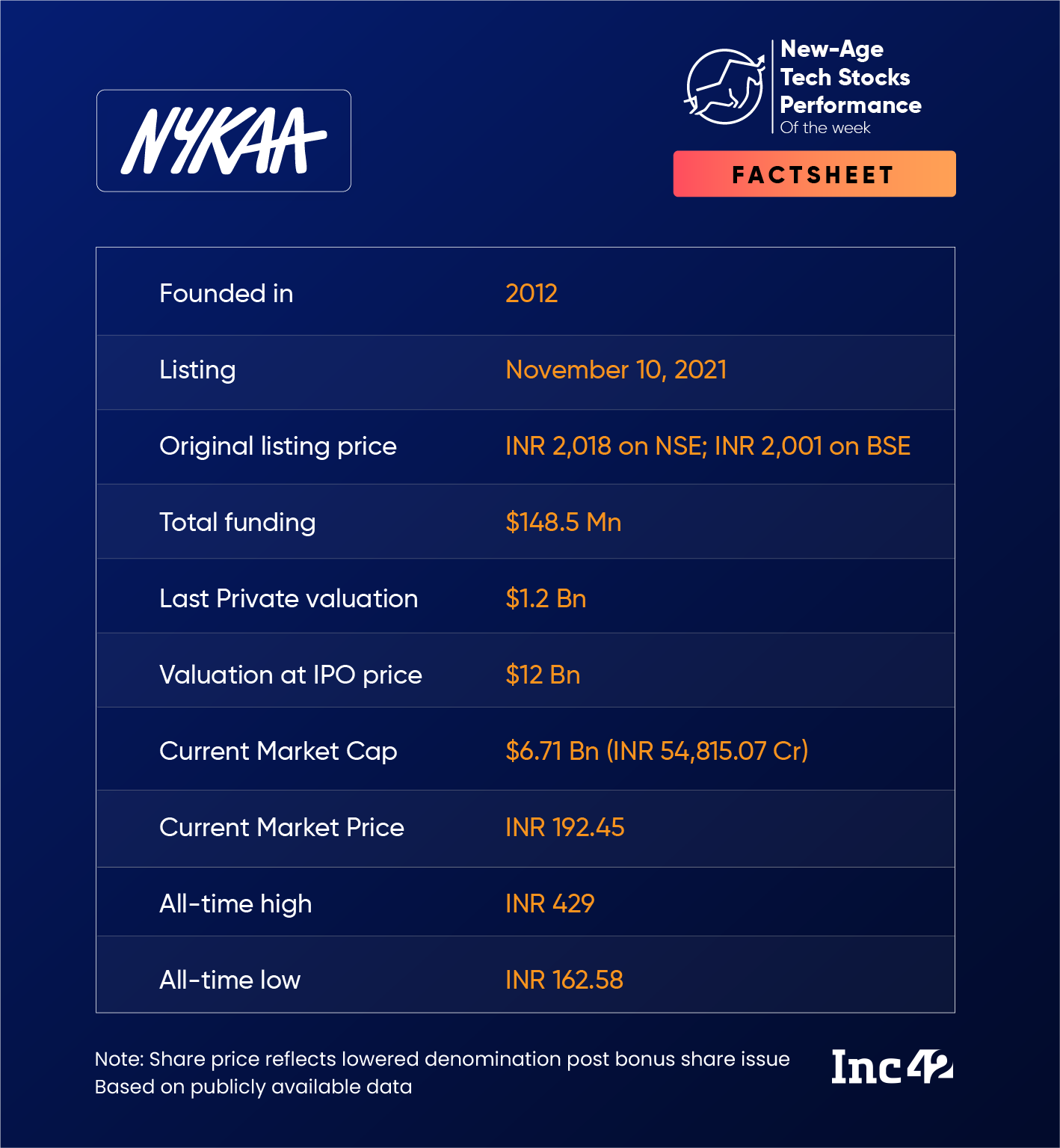 Delhivery Witnesses One Of Its Worst Weeks

Shares of logistics unicorn Delhivery slumped 7.7% this week as they fell for three straight sessions. It ended Friday’s session at INR 351.15. Its lock-in period expires next week, which is likely to add more volatility to the stock.

In The News For

Delhivery has formed a trading range with INR 400 on the higher side and INR 350 on the lower side. “There is a possibility of a pullback if the stock succeeds to trade above INR 370-INR 380. If the stock trades above that same level, then the immediate hurdle for the stock would be INR 400 and INR 410,” said Athawale. 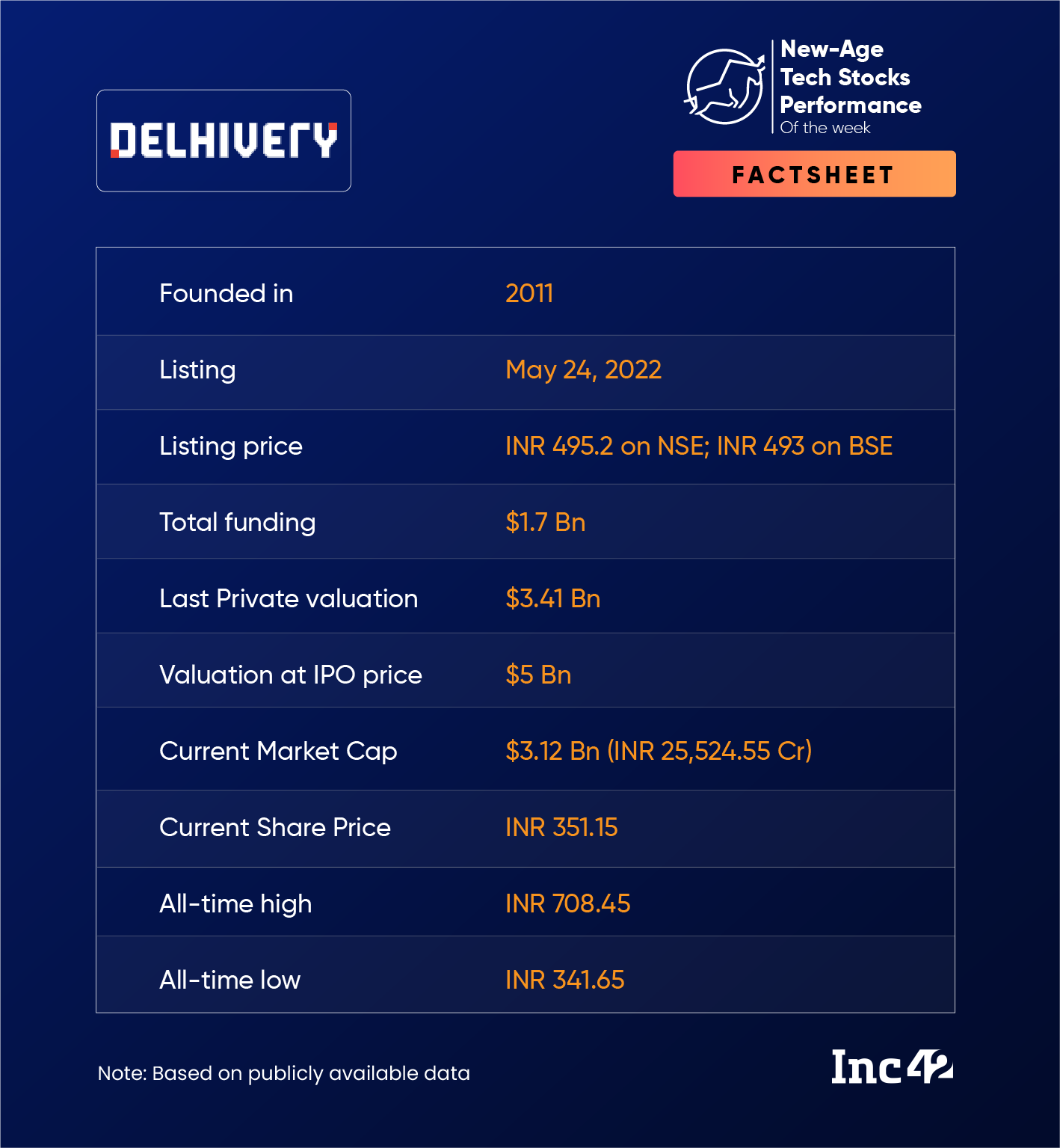