Of the 12 new-age tech stocks under our coverage, eight rose on a week-on-week basis

Indian new-age tech stocks gained this week on the back of a rally in the broader market even as volatility kept the gains in the overall Indian stock market in check.

Of the 12 new-age tech stocks under our coverage, eight rose on a week-on-week basis. Paytm emerged as the biggest winner, reversing its losing streak of the last two weeks.

Helped by analysts’ positive commentary on the stock, Paytm ended Friday’s session 7% higher at INR 536.9 on the BSE. On a weekly basis, it jumped over 15%.

Delhivery and Nykaa, which were under a lot of pressure in recent weeks, also ended in the green this week. While Delhivery rose 5% on a weekly basis, Nykaa gained 1%. On Friday, shares of Delhivery ended 3% higher from the previous close at INR 348.85 on the BSE, while Nykaa jumped 4% to INR 178.25 during the last session of the week.

Meanwhile, the two biggest gainers of last week, EaseMyTrip and Fino Payments Bank, shed their gains, falling 1% and 5.7%, respectively, on a weekly basis. After a rally on Thursday following its announcement of acquisition of a majority stake in Nutana Aviation, shares of EaseMyTrip fell 3.5% to INR 64.3 on the BSE on Friday.

“As the market was in an overbought zone after the recent upsurge, correction was due for some time and hence investors booked profit in a trading session marked by weak Asian and European cues,” said Amol Athawale, deputy vice president of technical research at Kotak Securities.

While the 6.3% GDP growth in Q2 FY23 was in line with expectations, global news flow is expected to continue to dictate the market trend going ahead.

“The two immediate triggers – RBI’s credit policy next week and the US Fed meeting in mid-December on the rate front would determine the investors’ mood in the near term,” said Athawale.

Now, let’s dive further into the weekly performance of the listed new-age tech stocks from the Indian startup ecosystem. 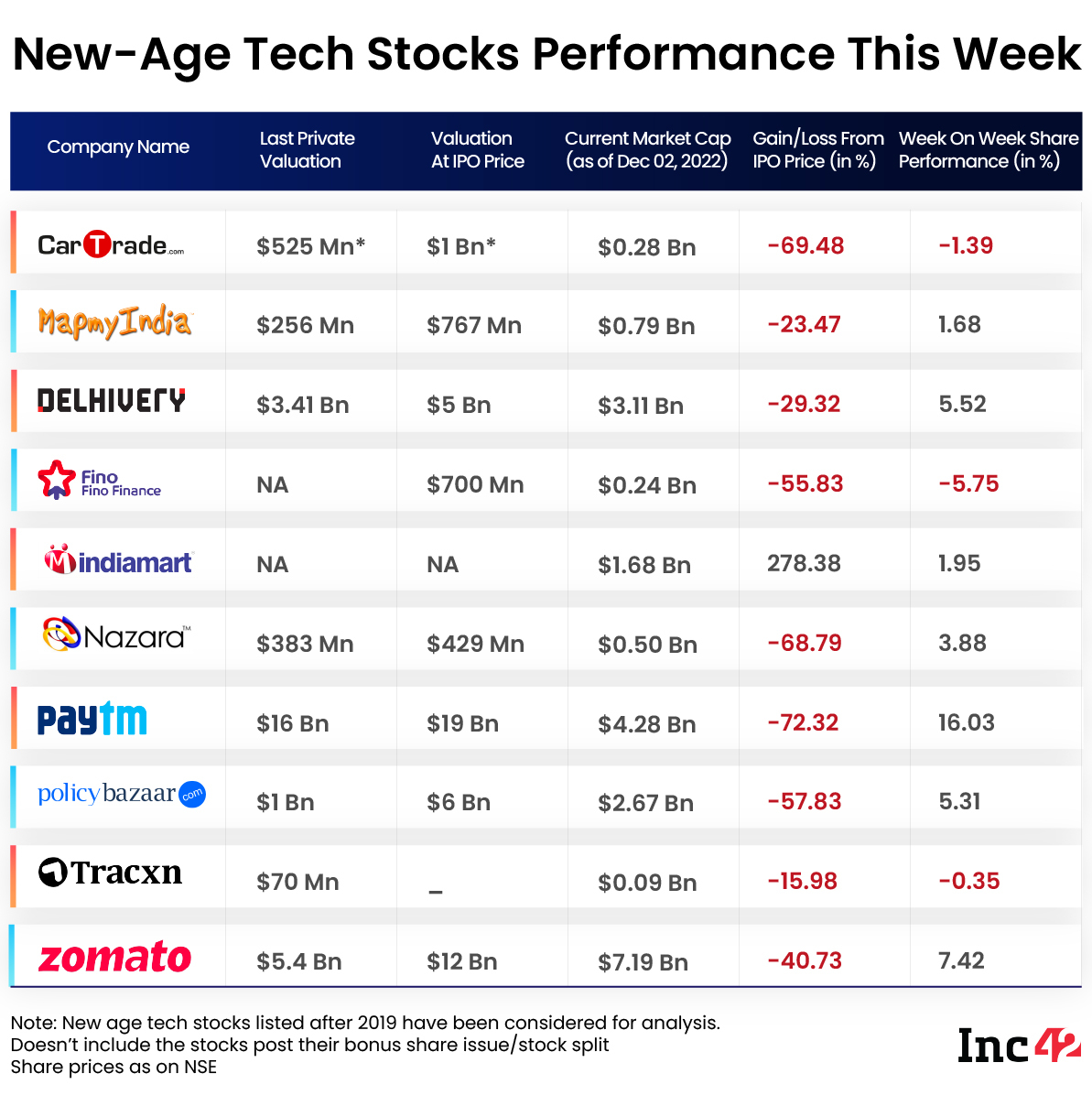 The 12 new-age tech stocks under our coverage ended this week with a total market capitalisation of $28.44 Bn versus $26.92 Bn last week. 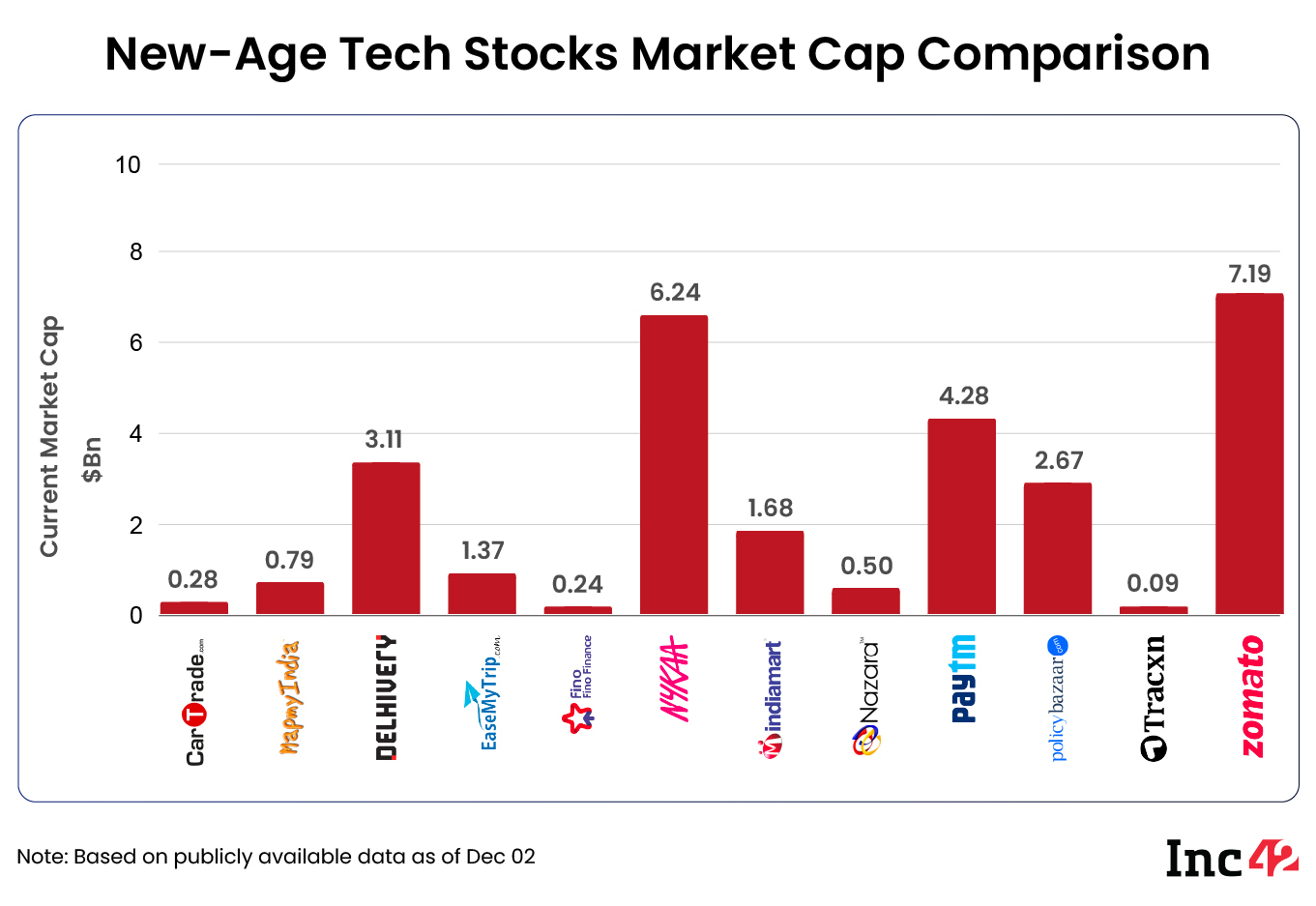 After being the biggest loser among the new-age tech stocks for the past two weeks, Paytm emerged as the biggest winner this week, gaining over 15% on a weekly basis on the BSE.

While some brokerages like Morgan Stanely remain on the sideline about Paytm, a large number of domestic as well as International brokerages now have a more positive view on the stock.

Analysts at JM Financial upgraded Paytm to ‘buy’ from ‘sell’ after the meeting and maintained a price target (PT) of INR 600, implying an upside of almost 12% to the stock’s Friday close.

In a report, JM Financial said that while it has remained cautious on Paytm’s business model due to the startup’s high cash burn, the risk on take rates in the financial services business and a long profitability pathway, the fintech startup’s operating metrics are gradually improving.

Paytm’s stock price correction by about 77% since its IPO has made its risk-reward strategy favourable, the brokerage said.

Goldman Sachs reiterated its ‘buy’ rating and INR 1,000 PT on the Paytm stock, implying an upside of over 86% to its last close.

Paytm’s new disclosures, including its focus on free cash flow and profitability, reducing competition in devices, and focus on aligning business with regulations, are encouraging, it said. However, it added that the timelines around the resolution of merchant and consumer onboarding (payment aggregator and payments bank bans, respectively) still remain unclear.

Meanwhile, ICICI Securities said that Paytm’s clarifications around regulatory developments during the meeting provided comfort and it sees no onerous outcome right now.

The brokerage has a ‘buy’ rating on the stock and a PT of INR 1,285, which implies an upside of almost 140% to the stock’s last close. 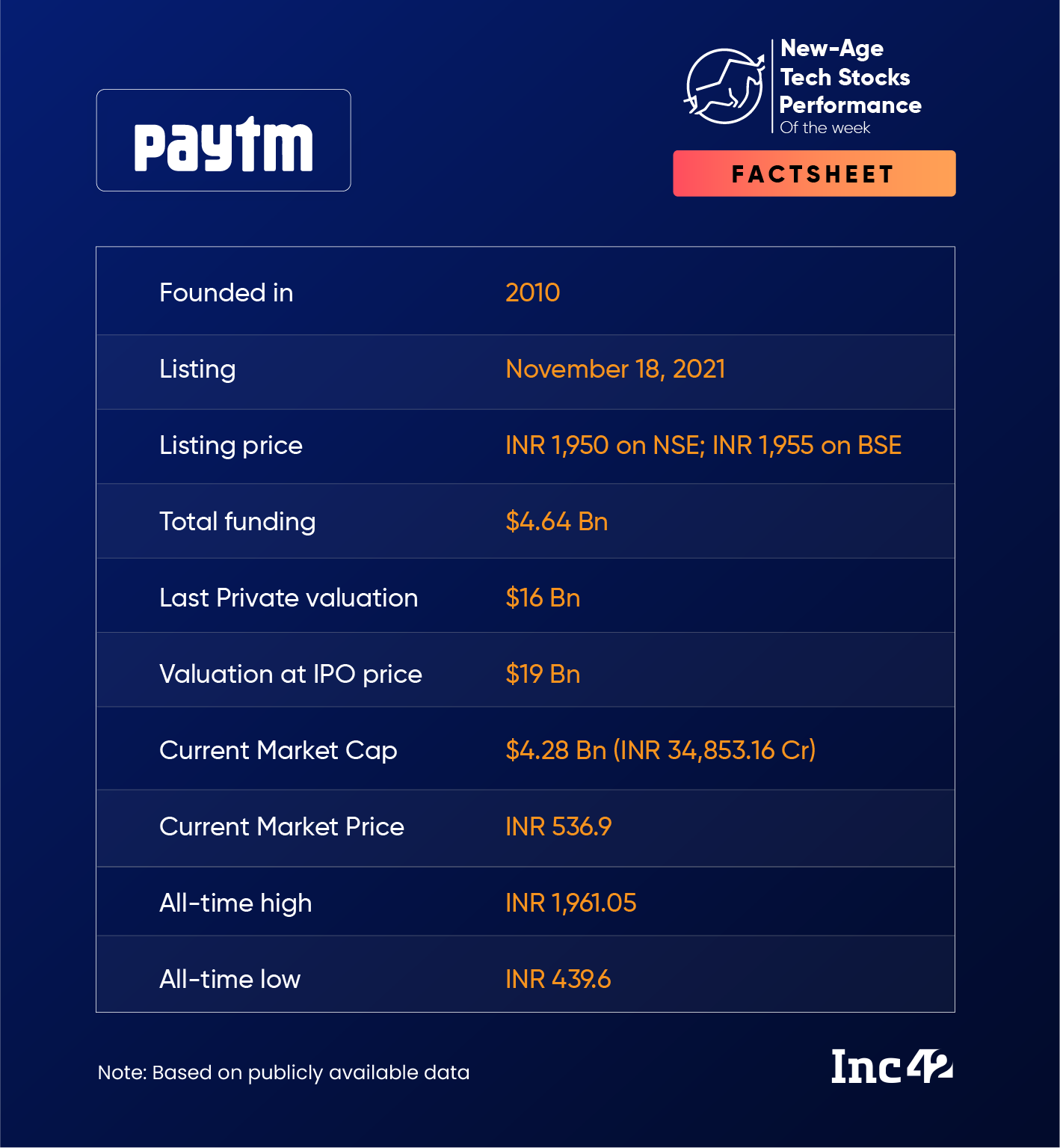 PB Fintech, the parent entity of insurtech startup Policybazaar and lending platform Paisabazaar, gained this week despite one of its major pre-IPO investors SoftBank offloading half of its stake in the company this week.

Mehul Kothari, AVP of technical research at Anand Rathi, recently told Inc42 that the risk-reward ratio for short-term trade is currently not favourable for PB Fintech. 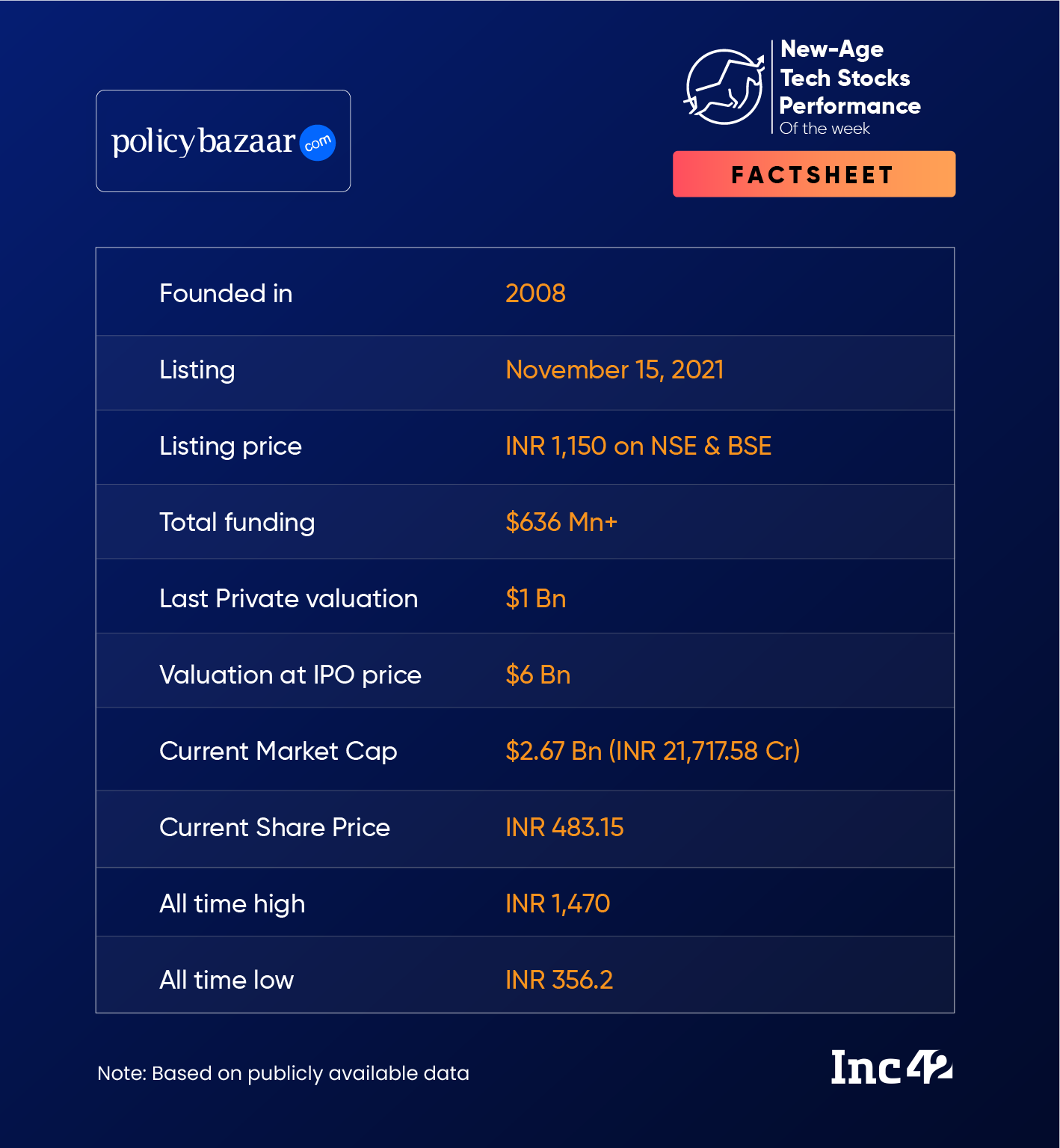 Shares of Zomato jumped over 7% this week, rising significantly in three consecutive sessions, closing at INR 68.6 on Friday.

The stock surged despite Alibaba, one of its major pre-IPO investors, selling almost half of its stake, or 26.3 Cr shares, worth INR 1,631 Cr in a bulk deal through its Alipay Singapore Holding.

As per the shareholding data available for the September quarter, Alipay held 55.9 Cr shares, or a 6.54% stake, in Zomato. After selling 3.15% of its stake in the foodtech giant, Alipay’s stakeholding came down to 3.39%.

Despite the sharp crash in the price of new-age tech stocks and uncertainty around profitability,  analysts are largely bullish on them, including Zomato, due to long-term growth prospectus.

In its recent research note, brokerage Bernstein said that Zomato was its top pick in its entire internet coverage. With an ‘outperform’ rating, it has a price target of INR 90 on Zomato, which implies an upside of over 31% to the stock’s last close.

Besides, after Prosus’ recently released half-yearly financial report, which also had Zomato’s rival Swiggy’s results for the six months ending September 30, 2022, brokerages, including Jefferies and Kotak Institutional Securities, reiterated their confidence in Zomato’s food delivery business. The brokerages said that Zomato is clearly gaining more market share in the segment compared to Swiggy. 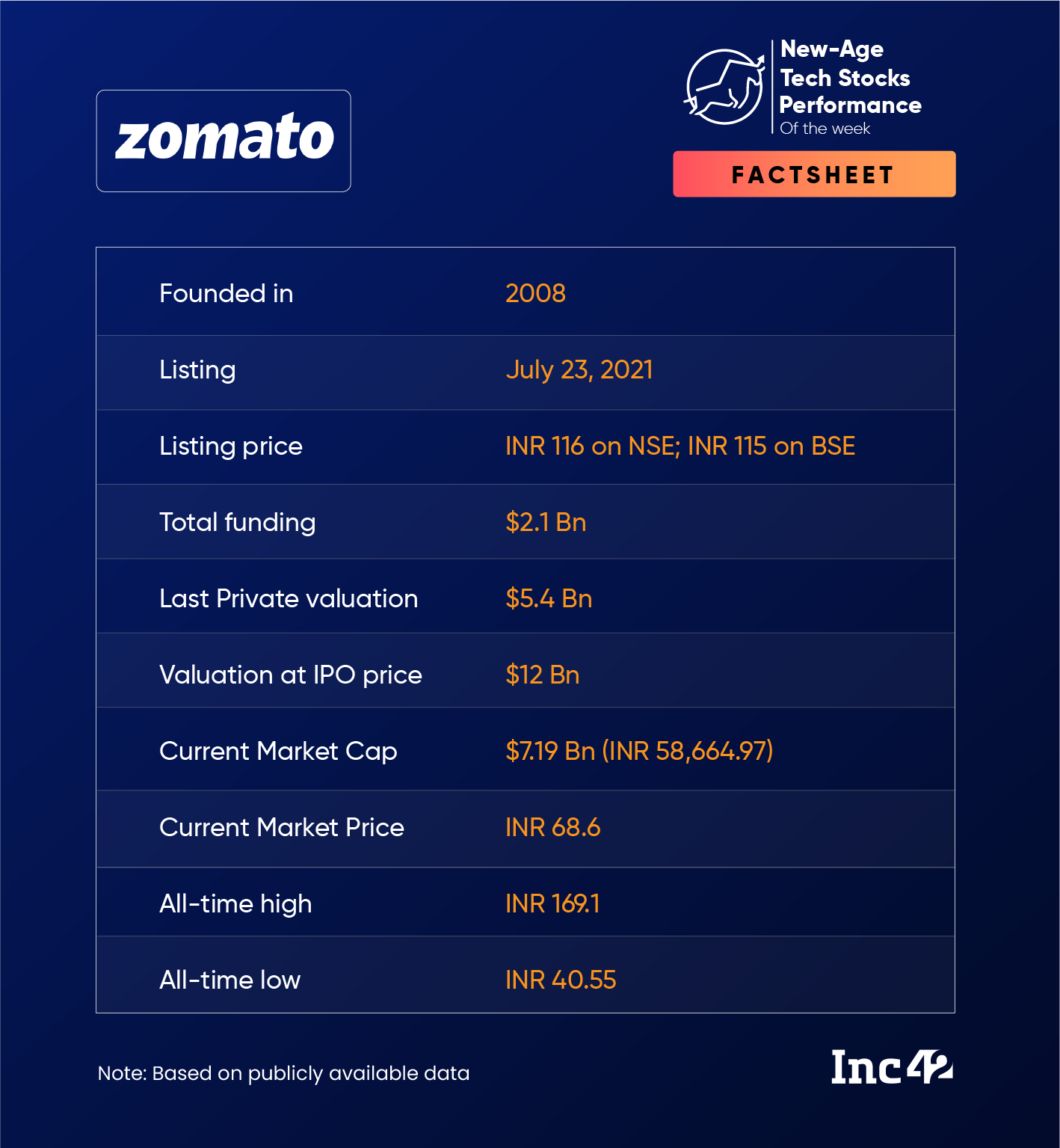