The year 2021 saw a record consolidation, with 210 M&A deals being completed

The year 2022 is set to see 279 M&A deals, the highest ever in the Indian startup ecosystem

With the rise in the number of startups in the country, there has also been an increase in the consolidation of the country’s startup ecosystem. According to Inc42’s ‘The State of Indian Startup Ecosystem Report, 2022’, there have been 1,100 mergers and acquisition (M&A) deals in the Indian startup ecosystem since 2015, with the number of deals increasing at a CAGR of 10% between 2015 and 2021. 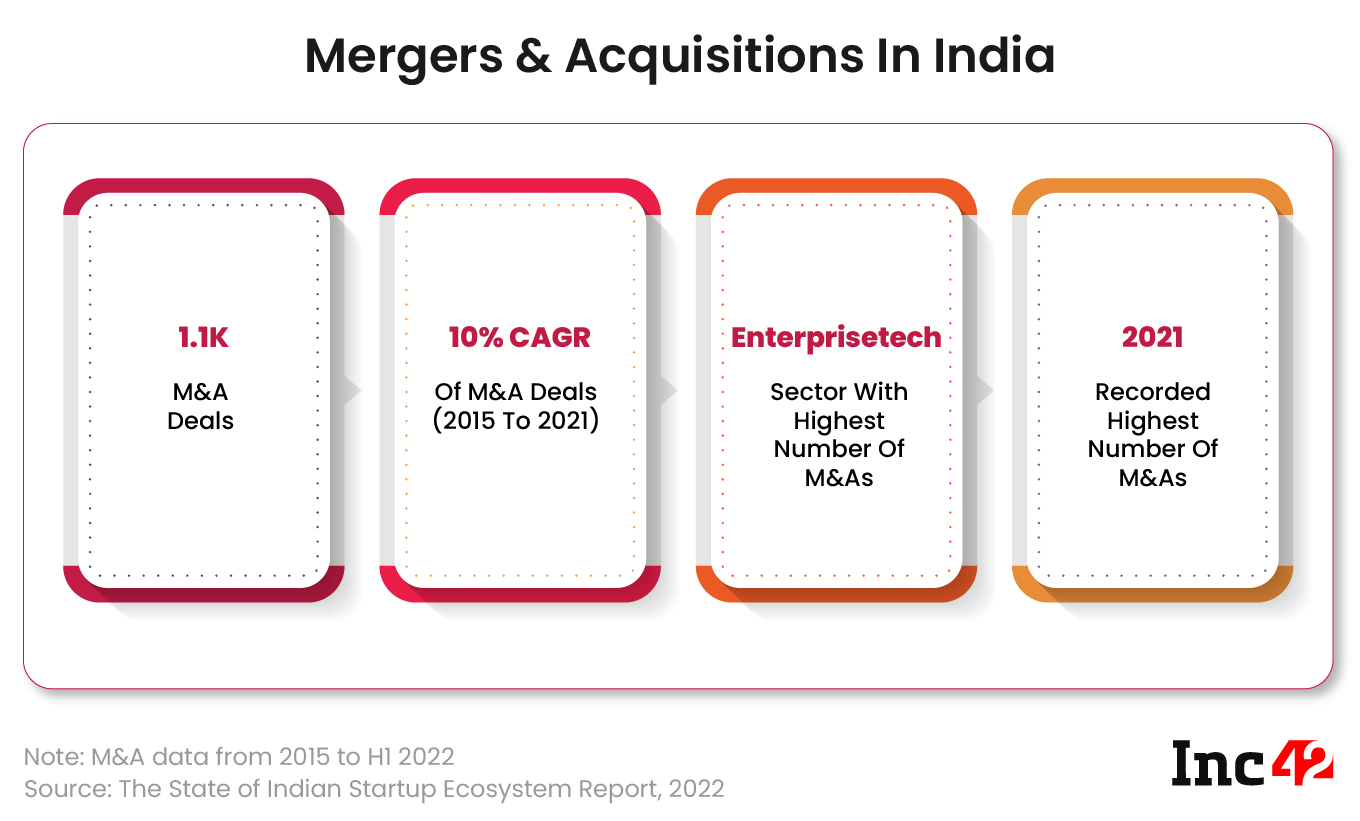 The year 2021 saw a record consolidation, with 210 M&A deals being completed, an average of almost 18 deals per month. It should also be noted that the startup ecosystem was flush with cash in 2021, with Indian startups raising $42 Bn during the year.

The trend indicates that consolidation numbers are directly proportional to the funding growth in the Indian startup ecosystem. For instance, the number of M&A deals peaked in 2021 with the rise in funding. On the other hand, 2020 saw the M&A activity at its lowest since 2015 as funding slowed down in the pandemic-ridden year. 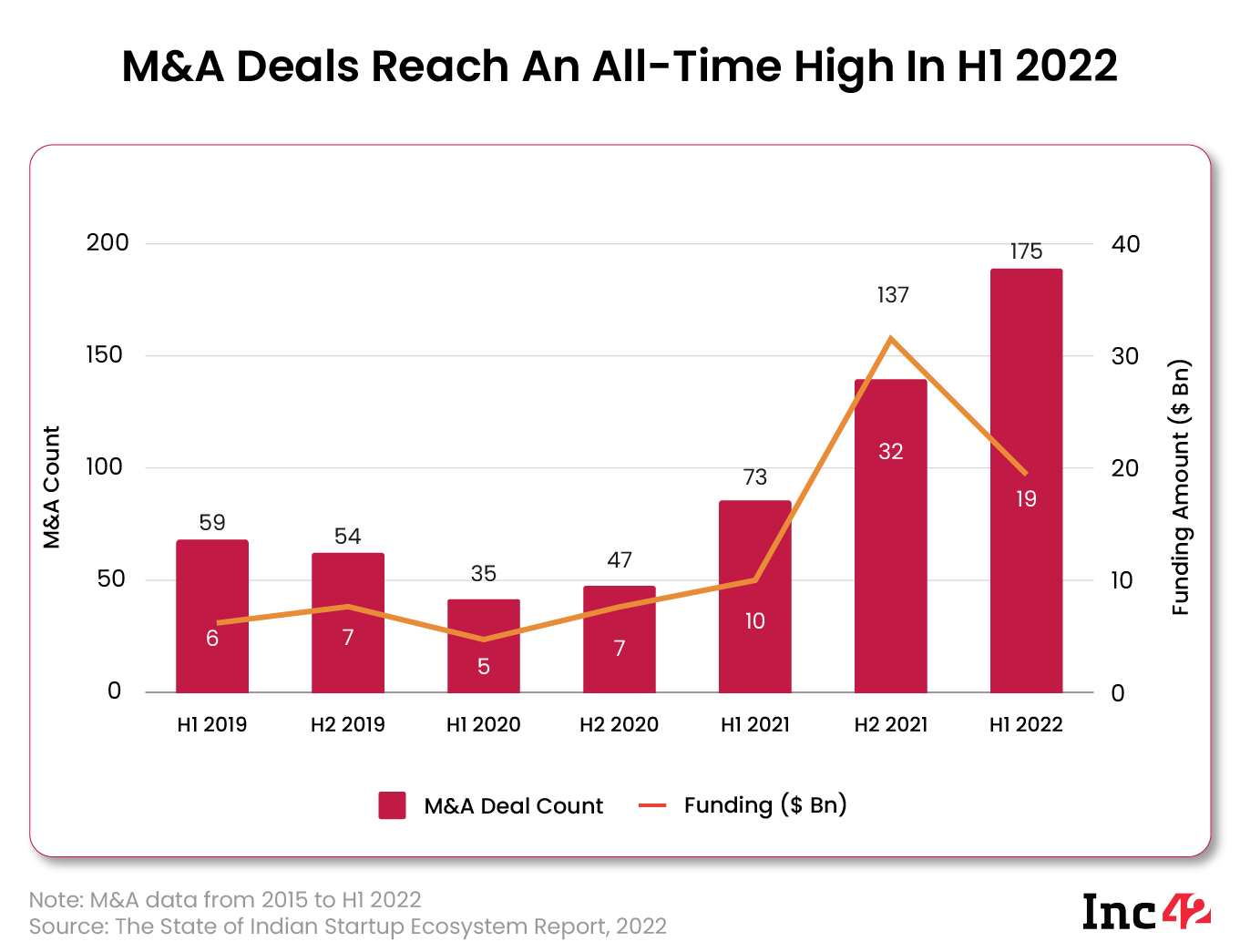 In terms of sectors, enterprisetech has seen the highest consolidation over the past seven years, accounting for almost a quarter of all M&A deals at 247.

Highly-funded sectors such as ecommerce, consumer services, fintech and edtech have also recorded 100 or more M&A transactions. Together, the top five sectors account for around two-thirds of all the M&A activity that has taken place in the Indian startup ecosystem since 2015.

It is reasonable to assume that since funding activity was at its peak last year, many startups, flush with cash, went for the acquisition of other startups for inorganic growth.

For instance, fintech, ecommerce and edtech followed this trend. Consolidation in each of these sectors was at its highest last year. However, the enterprisetech sector saw peak M&A activity in 2015, while the same took place in 2016 for the consumer services sector.

Ecommerce dominates the charts when it comes to the most prolific acquirers. The likes of Flipkart, Mensa Brands, GlobalBees and Upscalio are on the list of the top 10 most prolific buyers in India’s startup ecosystem.

Flipkart, which itself was acquired in a mega deal by Walmart in 2018, has acquired 18 startups over the years, including Myntra, PhonePe and Live.ai. Further in ecommerce, Thrasio-style ecommerce rollup startups Mensa Brands, GlobalBees and Upscalio have acquired a combined 42 startups to date.

Edtech majors BYJU’S and upGrad have also been making the moves, with BYJU’S spending $2.5 Bn on acquisitions alone since the start of 2021. Recently, upGrad has also upped the ante, picking up five startups in 2022 alone.

Foodtech startups Zomato and Curefoods have also acquired a number of startups over the last few years.

While Curefoods’ business model is based on having multiple food brands under its umbrella, which has seen it make 14 acquisitions so far, Zomato has been involved in 15 deals on its own.

Zomato was also recently involved in the third-largest acquisition deal ever in India’s startup ecosystem when it picked up quick commerce unicorn Blinkit for $568 Mn in June this year.

The largest-ever M&A deal in India’s startup ecosystem took place in 2018 when the US-based retail giant Walmart acquired a 77% stake in ecommerce major Flipkart in a deal worth $16 Bn.

The slowdown in the equities market this year in the wake of the Russian invasion of Ukraine also translated into a slowdown in the private equity market. This led to a decline in funding across the world, including in India.

Besides, the Indian government has been taking steps to regulate the emerging sectors and the startup ecosystem, which has also made stakeholders anxious and risk-averse.

With increased focus on unit economics and profitability amid a funding winter, which many investors expect to last for 18-24 months, many startups are worried about a cash crunch in the near future. These factors have thus propelled the Indian startup ecosystem towards consolidation.

While there are multiple other underlying factors which have an effect on the consolidation trends, funding trends and investor focus mostly dictate which way the wind blows. 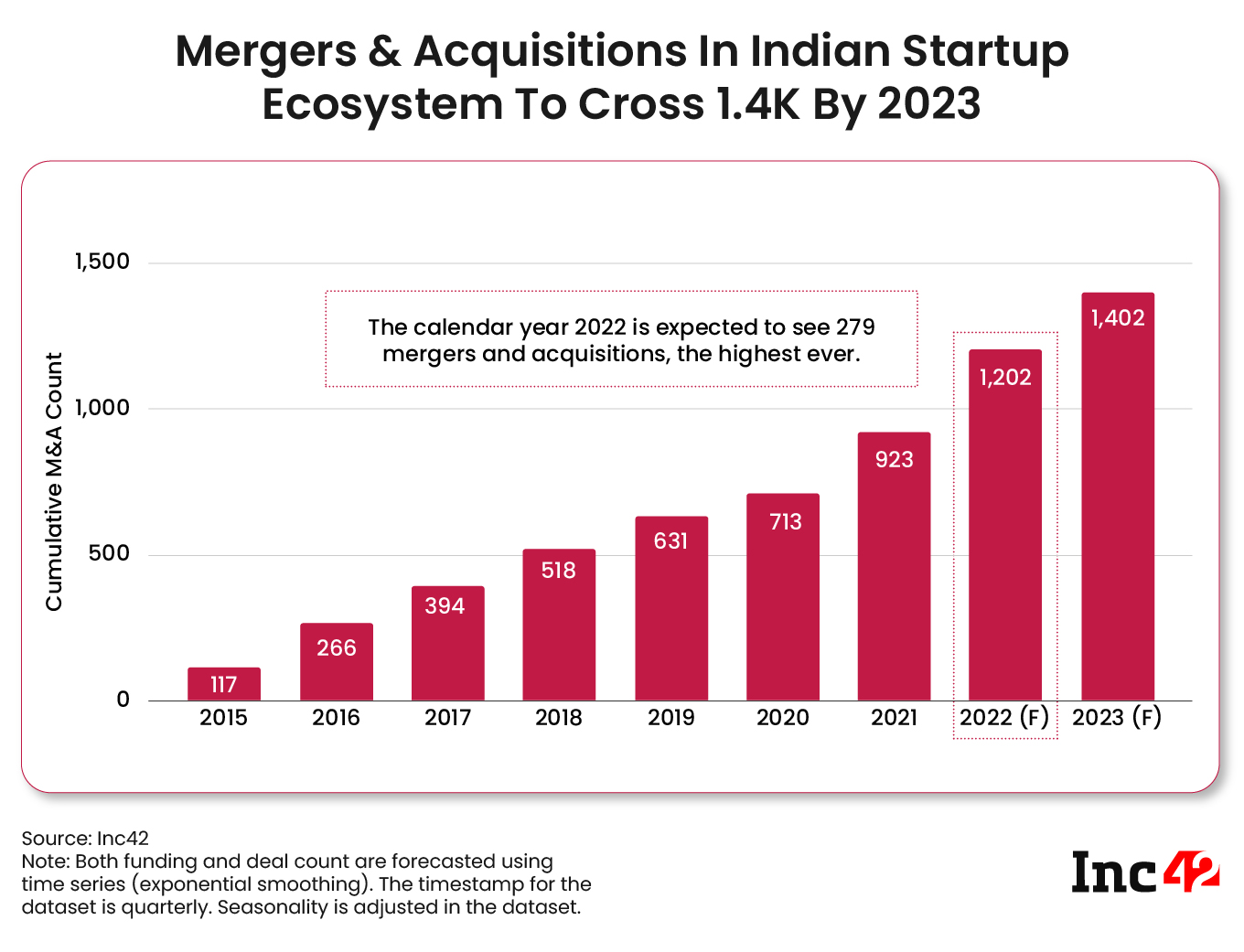