Till just a few years ago, getting meat delivered to your doorstep was a pipedream. It was a luxury unless you personally knew the butcher or trusted the local retailer enough.

But technology, ingenuity of meat delivery startups and the pandemic have changed this altogether and brought in a new reality for meat shopping in metros and smaller cities. We also have a meat delivery startup in the unicorn club, so how are startups looking to cash in on this opportunity?

Hang on to find out, but first a short detour into these two stories:

Let’s dive right in. While the online meat delivery industry in India is still growing and largely underpenetrated, startups have paved the path with meat-specific supply chains and quality control chains.

We have seen more than half a dozen startups dedicate themselves to the meat delivery business, while those in the general essentials and grocery segment are also building capability for this.

And that’s not even counting the meat substitutes and alternatives that are also gaining traction in Indian metros. 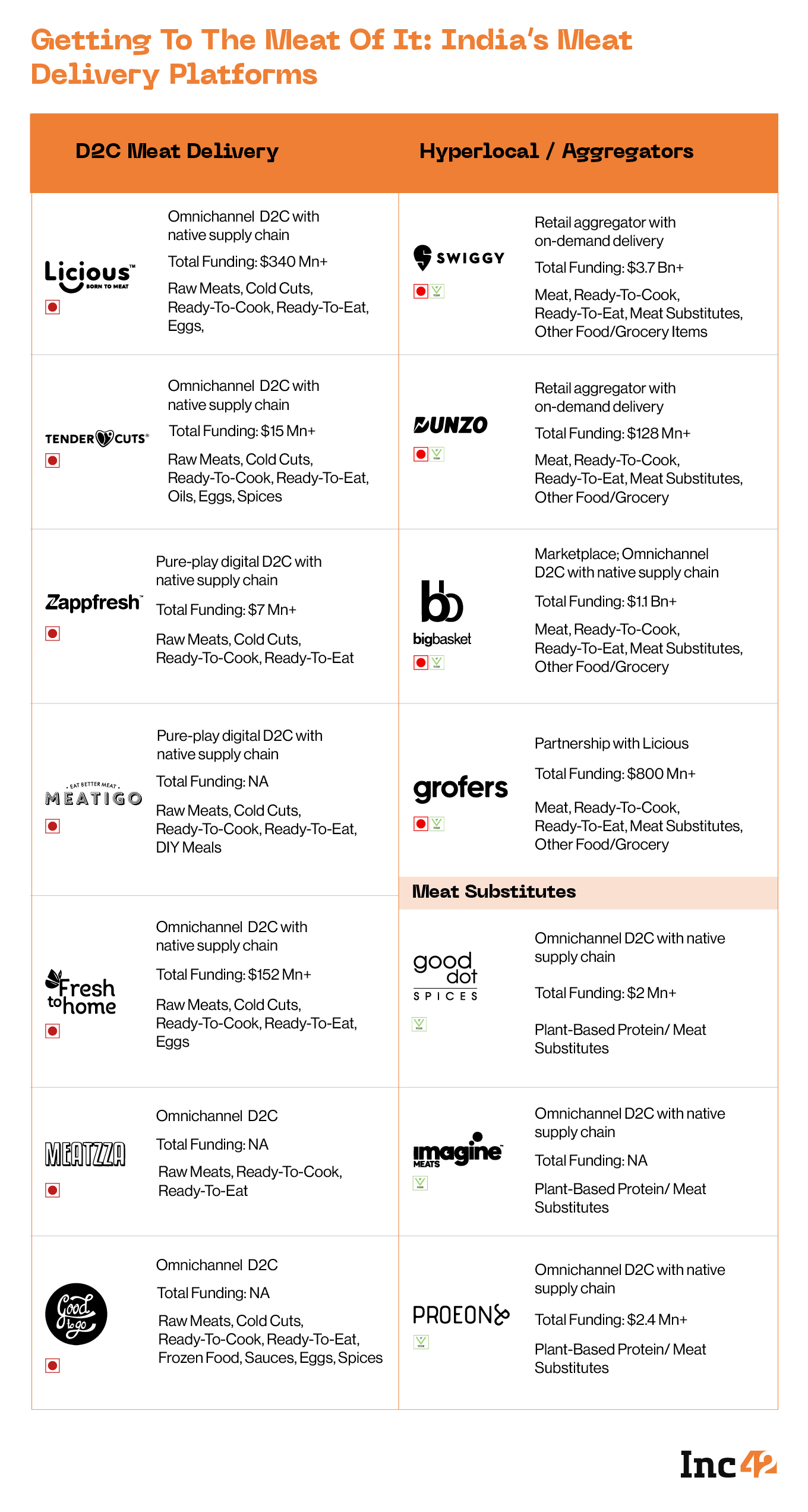 ⬆️Post-Pandemic Boom: Competition in the meat delivery space is intensifying, and that’s largely because of the value propositions unlocked amid the pandemic. While Licious has secured millions to expand and grow the retail side of its business, others are also rapidly building up capacity in new cities.

As per a RedSeer report, the overall GMV in the online meat segment has doubled over the last 18 months, thanks largely to near-constant availability and predictable delivery cycles, along with the hygienic and high-quality nature products, which is a key criteria in this segment, more than vegetables or groceries.

🛵Delivery Rivals: Licious is the only unicorn in this space and has raised $285 Mn till date, but that pales in comparison to the likes of Swiggy, Zomato-backed Grofers, Tata-owned BigBasket and others that have also realised that meat delivery can be a lucrative segment.

Nevertheless, Licious, Zappfresh, Tendercuts, FreshToHome and others that are solely in meat delivery are confident that their dedicated supply chains and quality control processes will be a large enough moat against the established delivery giants.

🔗The Supply Chain Moat: FreshToHome founder Shan Kadavil believes that while food delivery and hyperlocal players might see success in pockets, meat can never turn into their focal point because it is only an add-on for them. He also pointed out that meat delivery requires supply chains to be redesigned according to geography and category of products. It’s a huge challenge that the likes of Swiggy and others are unlikely to focus on in the short or medium term.

Another example that Kadavil gave is the ‘commodities exchange’ electronic trading platform for fishermen, who sell their catch to FreshToHome directly. Such processes need to be put in place for procurement, which makes it a complex operation.

Zappfresh founder Deepanshu Manchanda added that the products that are sourced by aggregators and marketplaces are not the same as the ones available with online meat delivery startups. That’s because the products are just what one might get in the market, where there’s no guarantee of quality.

These nuances are reflected in the market share for sales by vertical meat delivery players, which accounts for 80% of all online sales, according to RedSeer estimates.

🌿Not Just Meat: At the same time, one cannot ignore the wave of vegan and plant-based meat substitutes in the market. Startups such as GoodDot, Imagine Meats, Proeon and others are tapping the niche addressable base for plant-based meat substitutes in India, while also keeping an eye on lab-grown meat, which is yet to hit the Indian market in a big way.

Abhishek Sinha, founder of omnichannel ‘vegan meat’ brand GoodDot, said that while in the long-term lab-grown meat might become mainstream in India, at the moment the Indian market is not ready to pay a premium for meat alternatives. So for now plant-based meat, which is more affordable and has a longer legacy in India, will continue to rule the meat substitutes market.

No matter the category, D2C brands in India have to find the right balance of price, design and functionality, and often new products come up when there’s a gap in this trifecta.

Panipat-based Hammer, which launched its first SKU — a wireless earbuds pair — in 2019, has sensed a gap in the electronics and wearable market, where it’s looking to introduce the concept of fast electronics, similar to how fashion startups work. 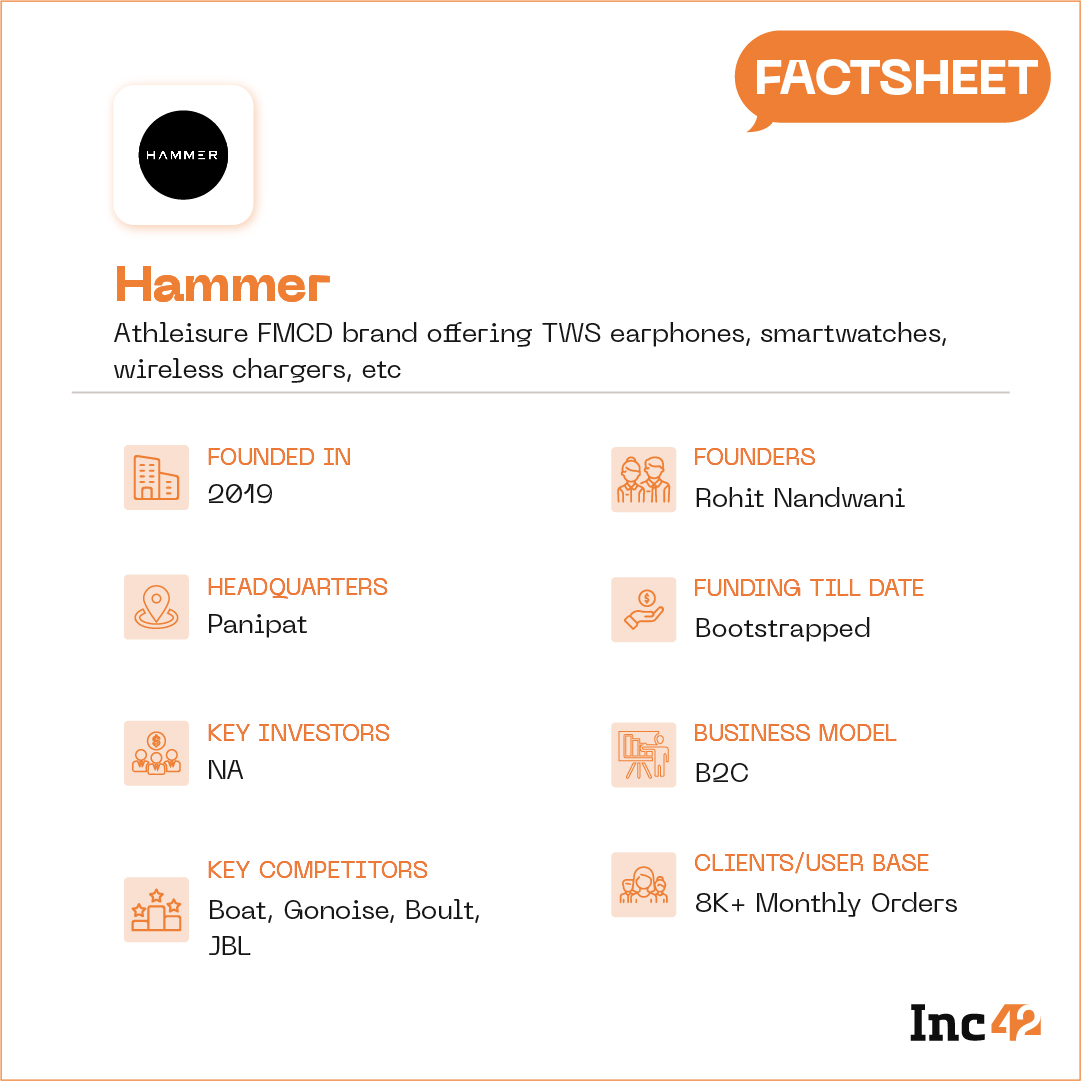 💡The Idea: Hammer has adopted a revolving door model that has worked well for fashion startups. Since 2019, the company has launched wireless audio products, a smartwatch, wireless chargers and more, but does not go beyond 15 SKUs at a time and rolls out new products every three months. This limited shelf-life means the category-agnostic products have to hit the right feature set and price points.

🎧The Product Journey:  Hammer went for quality right from the get-go, and signed a deal with Germany-based audio and electronics giant Sennheiser for contract manufacturing, before setting up a manufacturing hub for its assembly-line operations.

The company says it has a current production capacity of 10K-12K units per month, scalable to 40K units, and clocks monthly sales of 8K products on an average. It claims to have earned INR 12 Cr in revenue in FY21, which is double of what it earned in 2020, and is targeting revenue of INR 40 Cr by FY24.

🚩The Roadmap: Hammer’s immediate goals include raising its first round of funding and launching its second manufacturing hub in Madhya Pradesh to scale up aggressively. Up next in the pipeline are lifestyle products such as IoT-enabled smart plugs, power banks and more. It has also started manufacturing LED bulbs for other brands to add to its manufacturing capabilities.

How did Thrasio grow from an ecommerce startup to a global sensation that has spawned several clones and off-shoots. Founder and CEO Carlos Cashman was at The D2C Summit by Inc42 Plus last week to reveal this and more. The Thrasio journey began like most startups when Cashman and his team found a gap in the ecommerce space — smaller brands that don’t have deep pockets could not capitalise on ecommerce.

Speaking at Inc42’s The D2C Summit, Cashman revealed, “We started thinking how we could help them [small brands] become successful, because all we had to do was invest cash! The parameters on which we were working — driving sales through ecommerce, Facebook and Instagram — were already simplifying the online journey for brands. So we started thinking about rolling them up.”

Revisit Cashman’s super insightful session and others from The D2C Summit at The D2C Academy.

That’s all we have for now. We’ll be back next week with another look at the latest from the world of D2C.