Startup India was launched on January 16, 2016, and in 2022, the date marks the first ever National Startup Day

“Today, India is rapidly moving towards hitting the century of the unicorns. I believe the golden era of India’s startups is starting now,” — Prime Minister Narendra Modi On National Startup Day

January 16 is a special day for startups in India. It was on this day in 2016 that the Indian government launched the Startup India initiative that has catalysed the startup ecosystem. So it’s only fitting that this is the date chosen as the National Startup Day.

While we recognise that entrepreneurs have always existed in India, the Startup India programme gave a push to new-age entrepreneurship and venture creation that has only grown bigger with each passing year.

We’ll look into what this means, but here are three important stories from the week gone by:

A Day To Celebrate Startups

It was on January 16, 2016 that Prime Minister Narendra Modi launched the Startup India programme, a key pillar of the larger Digital India vision. And in 2022, the day marks the inaugural National Startup Day.

The Startup India Action Plan was the first dedicated government policy for startups, which looked to bring investments and grants to startups and innovation. The platform allowed entrepreneurs to register their startups, gain access to investors, secure equity-free funding, fast-track patent and trademark approval process, and comply with regulatory requirements.

The Numbers Behind Startup India: Over the past six years, the programme has made investments worth over INR 8,085 Cr (~$1.08 Bn) in 550 startups from the government’s fund of funds and has committed INR 6,495 Cr (~$873.1 Mn). As per official records, more than 61,669 startups have been recognised by the Department for Promotion of Industry and Internal Trade (DPIIT).

Spurring Investors On: Another tangible contribution from the initiative is the way it drew in global investors to the India story. Official recognition for startups and their innovation through Startup India events have contributed to capital inflow.

The year 2021 was a landmark year thanks to $42 Bn being invested and 42 startups entering the Indian unicorn club, and 62 new startup funds. In 2021, India also had the second-highest number of mobile app downloads in the world, with over 27 Bn downloads.

Taking Startups Deeper: Government policies coupled with the establishment of the state-run incubators have also been key drivers of entrepreneurship into the heartland of India. The next big startups will emerge from among the 73 soonicorns in India, and the early-stage growth in 2021 has been more than encouraging.

Earlier this week, industry and commerce minister Piyush Goyal had called on Indian entrepreneurs to add 75 new unicorns this year. 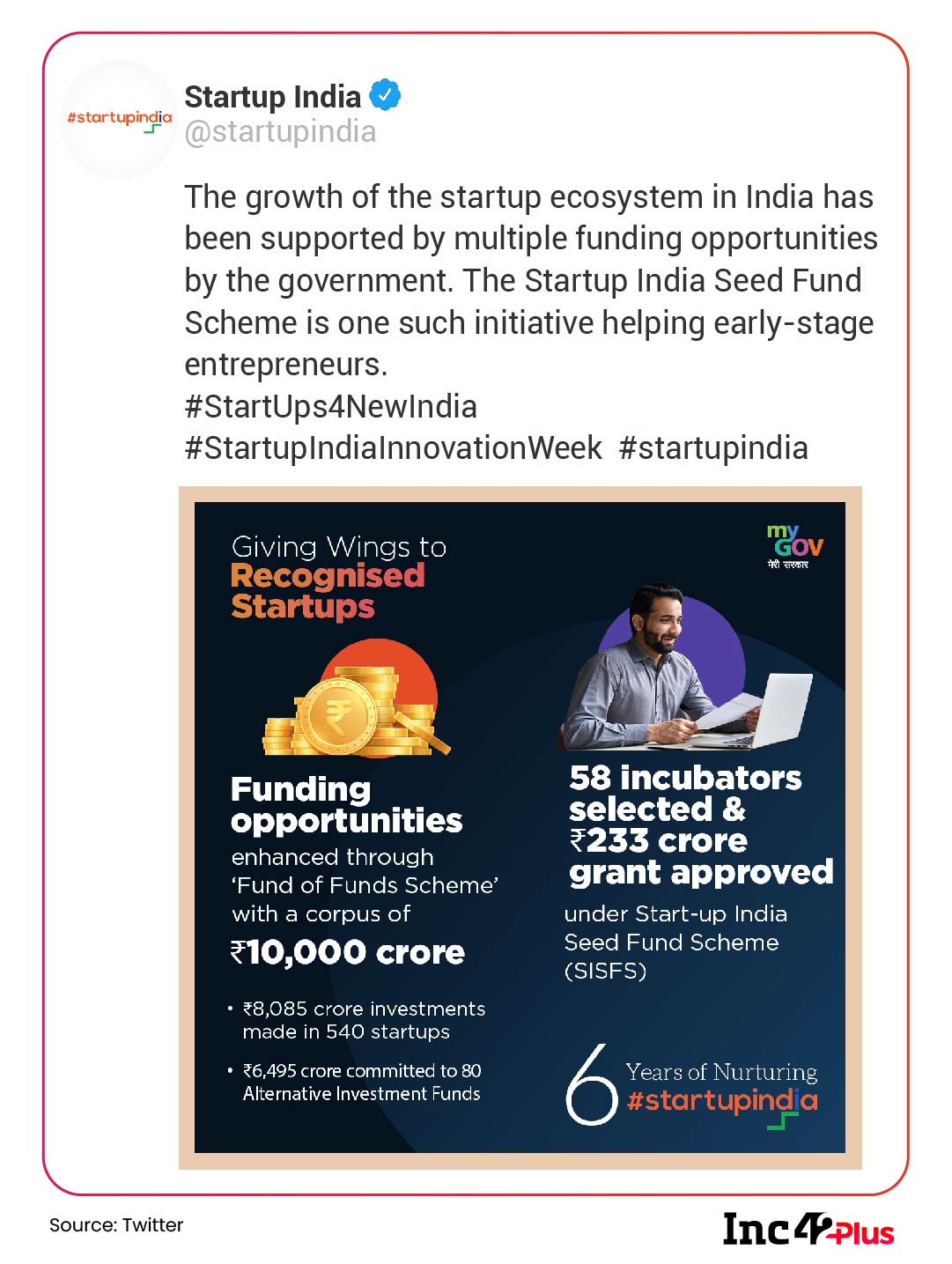 Referring to the future prospects, Modi said that only half of India’s population is online, so the possibilities are immense for the future, and he appealed to startups to move towards villages.

“Whether it is mobile internet, broadband connectivity or physical connectivity, aspirations of villages are rising and rural and semi-urban areas are waiting for a new wave of expansion,” the PM said.

Here’s the weekly performance of listed tech companies in the first week of the new year: 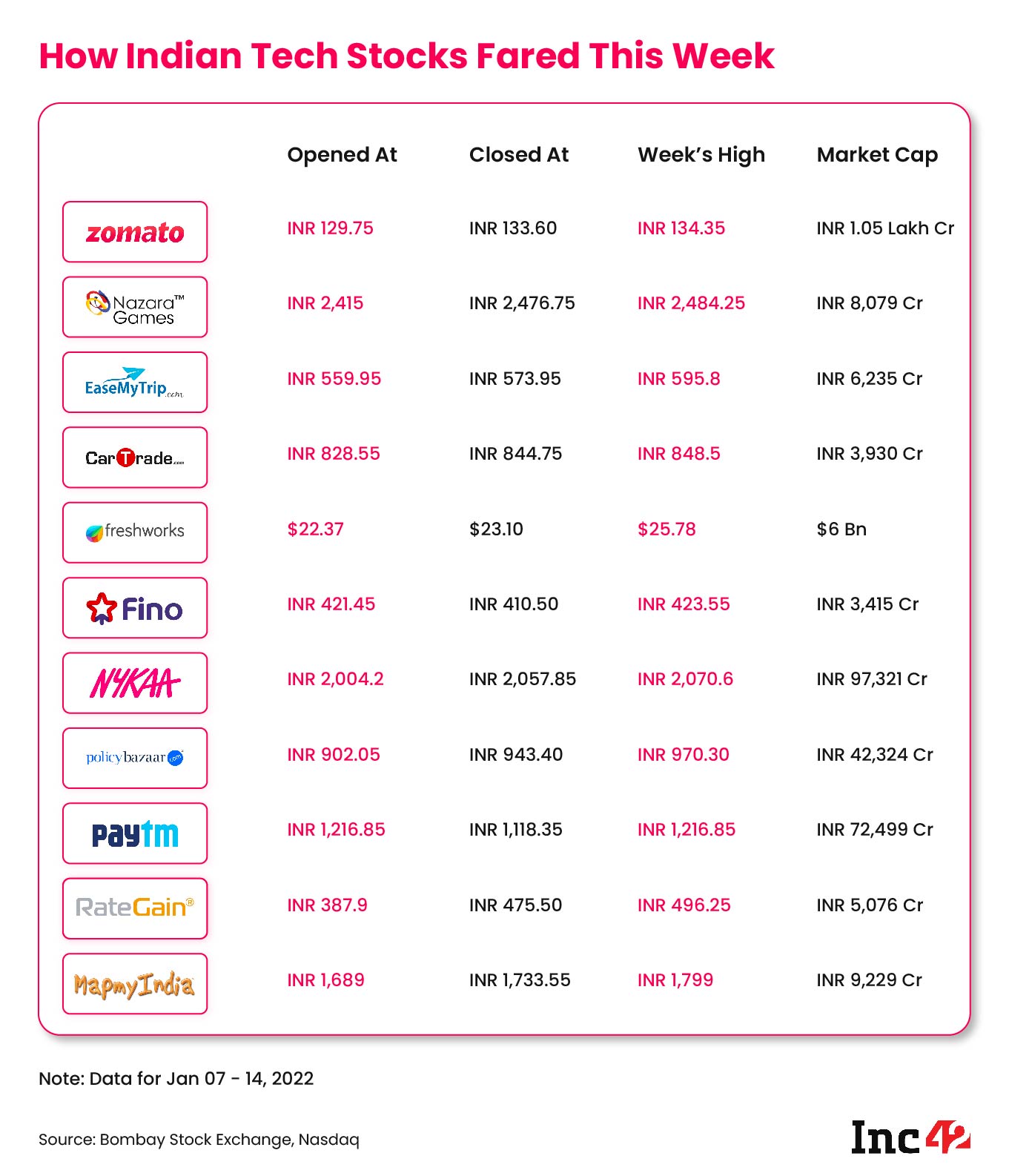 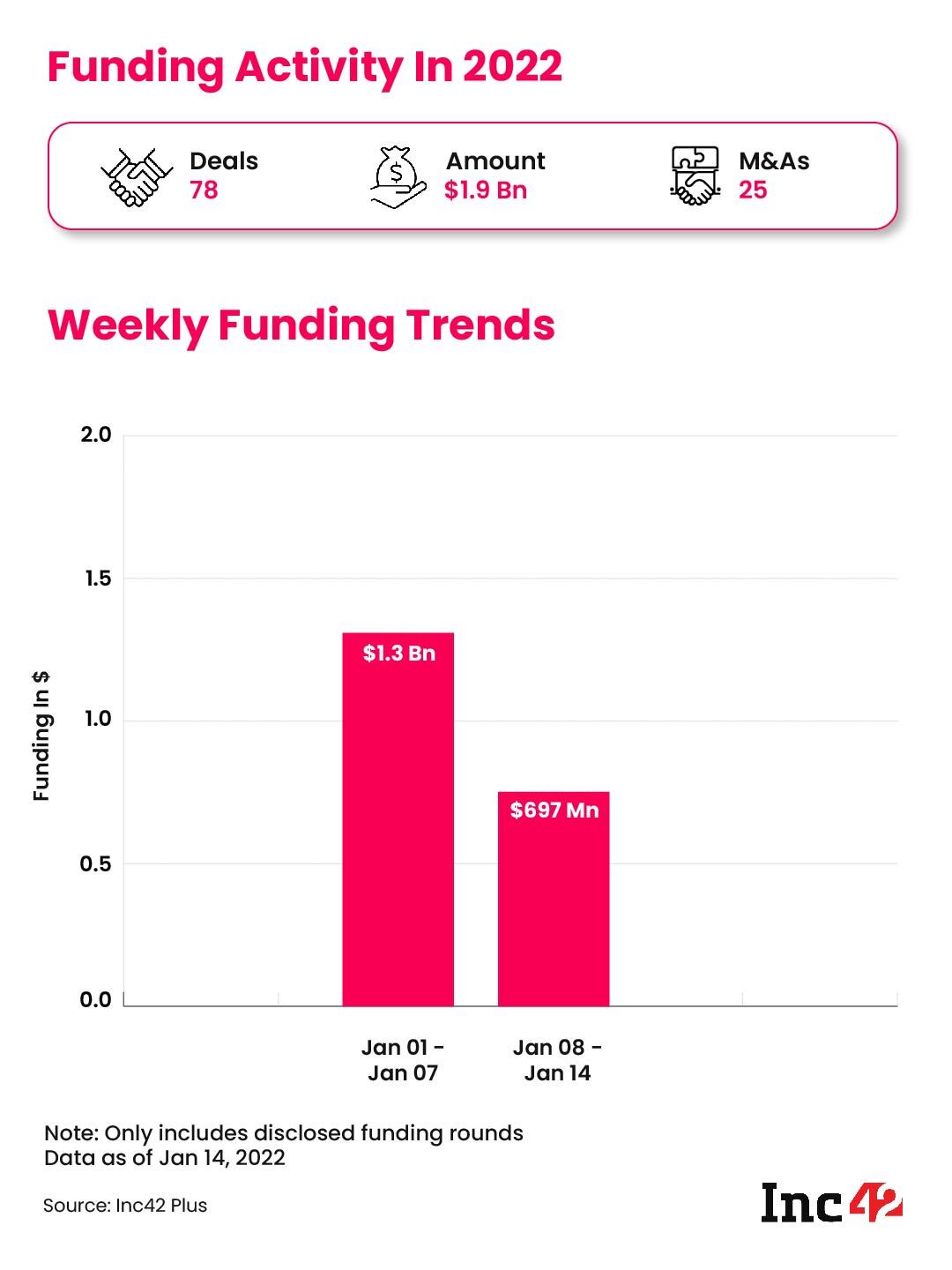 That’s all for this week, folks. Watch out for a more data-packed newsletter every Sunday as we recap the week’s biggest stories and developments.