How The Much-Hyped Edtech Startup Failed In the process of winding down or looking for a buyer, Metaversity has sacked 20 employees already and the rest will follow in the coming days

At one point, investors had proposed Maheshwari take a payout of $100K in cash to leave the company

Even before it could take off, Metaversity has come crashing down.

The much-hyped edtech-metaverse hybrid founded by former Twitter India chief Manish Maheshwari and former Microsoft senior engineer Tanay Pratap has officially announced that it is shutting shop in one way or the other, a few months after raising $5 Mn.

From its MetaMBA 16-week programme promising market-ready skills to plans of building a metaverse for universities, Bengaluru-based Metaversity had all the right ingredients to attract investors, users and media. So what went wrong?

Put simply, what Metaversity lacked was the very essence of what makes a tech startup:

A shared vision among the leadership.

Founded in 2021, Metaversity was always straddling two worlds — edtech and web3. Even the founders could not agree on the sector or the plan, so after raising over $5 Mn from 70 plus investors, Metaversity has turned into another doomed startup or shall we say vaporware.

Backed by the likes of Future Group’s Kishore Biyani, T.V. Mohandas Pai, Dr Ritesh Malik and former Facebook India head Kirthiga Reddy, and founders from Zerodha, Razorpay, Sheroes, Snapdeal, CARS24, the startup was considered a hot property. But now Metaversity is considering all options including a sale to winding down even before it could launch its product in the market.

Besides the disconnect between the founders, sources told us Maheshwari was offered a sum of $100K to leave the company, which the former Twitter India CEO declined.

And as Metaversity struggled to find the right product and approach, employees were told to leave without much notice, while students who were forced to quit their jobs to join the MBA course were left without a job and with no course.

The challenges at Metaversity, despite some of India’s largest angel investors backing the company, have raised more questions about whether investors are indeed vetting products and checking the compatibility of founders before investing.

How will the Metaversity problem change early-stage investments in Web3 products or indeed other startups amid a funding winter.

What Made Metaversity A Doomed Versity

Since the first report by The Morning Context on Metaversity on May 19, Maheshwari has now spoken in length on what went wrong.

“As we progressed, the differences also emerged between the founding team on the vision (are we an education company or a metaverse company?) and the approach to achieving that vision.”

However, that’s not the only issue. Maheshwari added the startup also did not get the tech part right, an area for which Pratap was responsible.

“As we started testing the early version of the Metaversity platform with students, it became apparent to us that the immersive classroom and the community experience were not getting delivered at a level that we had envisaged. We also ran into technology and ecosystem challenges as we solved accessibility on devices currently used by students.

This impeded the startup from “delivering a significantly differentiated learning experience” – the cofounder added.

Following this, Metaversity cancelled the course before it began and the advance fees paid by students were fully refunded along with interest.

Metaversity’s team of 30 was working from the Bengaluru office over the past few months. In a twist, Maheshwari laid off 20 of these employees in a Zoom meeting last week, while some of the tech team members who are still working at Metaversity, will be asked to leave in a week or two, an Inc42 source said.

One of the employees told Inc42 that the company had made working from the office mandatory in the past few months and that there was no option for them to work remotely.

However, when it came to firing them, the management opted to fire them on a Zoom call rather than having an in-person meeting.

‘Maheshwari Was Offered $100K To Walk Away From The Company’

Even before things came to this, Manish Maheshwari was offered a chance to walk away from the company. One of the sources close to Metaversity’s investors told Inc42 that Maheshwari’s post has stated only his version of the story.

While Maheshwari has blamed the technology problems, the truth is that the course was actually ready and Maheshwari had even tweeted about this.

However, there were hardly any talks between the cofounders to figure out the problem.

Maheshwari wanted to make Metaversity a metaverse startup, while Pratap wanted to build an edtech startup using metaverse as a medium.

At one point, Manish Maheshwari was offered $100K in cash to leave the company. However, he unilaterally declined to do so.

‘Maheshwari, being the majority shareholder, has made the company dance to his tunes without bringing any life to it,” said the person on the condition of anonymity. Gergely Orosz who is also an angel investor in the company tweeted, “As an investor, I see @invactHQ  succeeding: but without you,” 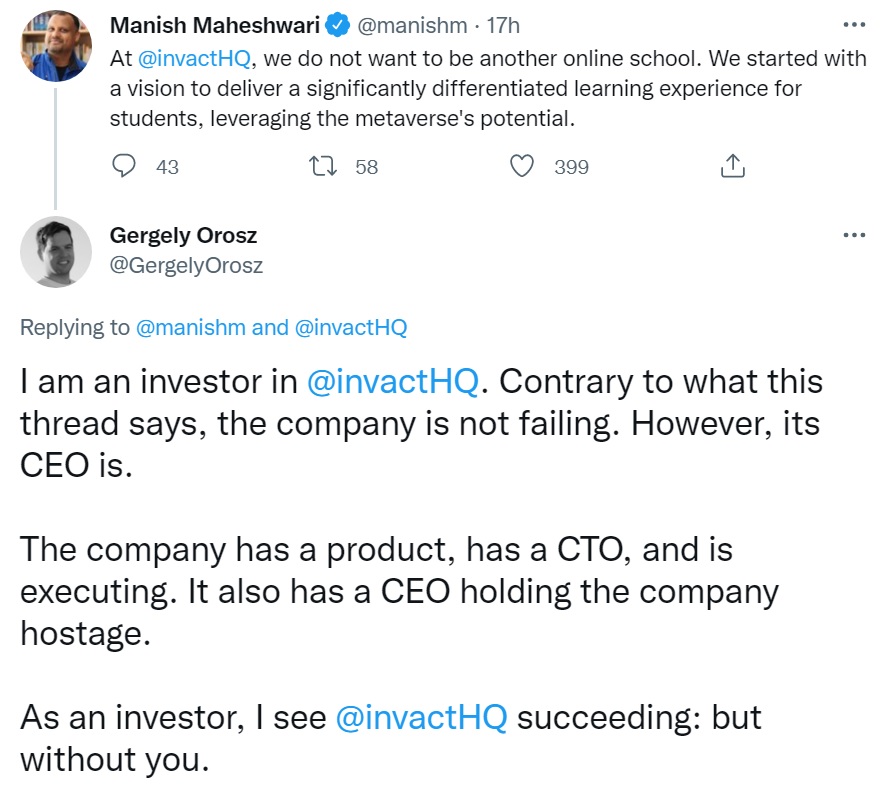 The source added that while one founder was in favour of building an entire university campus offering job placements and more, another saw it more as a B2B metaverse product that could be sold to universities.

While both had agreed on the potential and opportunity for Metaversity, their paths divulged quite a bit, the person told Inc42.

Despite these differences, neither founder is ready to leave the company.

Besides employees, many of whom had left MNCs and high-paying jobs to join Metaversity, even the 60 students are left in a lurch. That’s because, as reported by other publications, the startup had forced these students to leave their jobs to pursue the MetaMBA.

The fall of Metaversity has thus raised fresh doubts about the job capabilities and certainties that startups may offer. An employee told Inc42 on the condition of anonymity, “I did not come here for a hike. It was the product that excited me. However, having lost my job in four months, I have lost my trust in early-stage startups.”

Similar to the talent, some of the company’s investors have lost their confidence in web3 products due to the Metaversity experience.

While startups have gone from heroes to zeroes in the past, the Metaversity captable has over 70 investors, including the likes of Future Group’s Biyani, Manipal group’s Mohandas Pai, former Facebook India head Kirthiga Reddy and the founders of Zerodha, Razorpay, Snapdeal, CARS24, Suki among other startups.

Metaversity had said at the time of the fundraise that the capital would primarily be used to build the platform and to bring in engineers, illustrators and 3D designers to fulfill the metaverse promise.

But all that has come to nought. One entrepreneur who invested in Metaversity told Inc42, “The company has defamed the entire Indian startup fraternity as well as the web3 ecosystem globally. Now people won’t invest in these startups easily. The funding which has already dried up will be made difficult for genuine startups where founders are trying to achieve something new.”