The festive season is a big deal for Flipkart and Amazon, and the two companies are leaving nothing to chance to make the most of it in 2022

From increasing workforce to setting up new fulfilment centres to spending big on advertising, both the companies are prepared for the festive season sales

The first pandemic-free festive season in three years is predicted to see online sales worth $11.8 Bn, with Flipkart and Amazon likely to account for most of it

The months of October and November bring cheer to ecommerce companies as Indians ready their shopping lists for online shopping festivals. Even as the impact of the Covid-19 pandemic is waning, ecommerce giants Flipkart and Amazon are gearing up for another bumper festive season.

A look at the numbers of the last few years shows why the festive season is such a big deal for the ecommerce companies. In the pandemic-ridden 2020, consulting firm Redseer predicted the festive season sales of ecommerce companies to be at $4.1 Bn. However, the companies overshot this, clocking a whopping $7.5 Bn in festive sales. Amazon and Flipkart also narrowly beat 2021’s prediction, with the two companies accounting for nearly 90% of the $9.2 Bn worth festive sales. While Redseer has predicted online sales of $11.8 Bn during the festive season in 2022, this is the first festive season in three years when people can shop without much fear of the coronavirus. With daily life returning to normalcy and markets seeing high footfall, Amazon and Flipkart will not only compete with each other but also over 1.5 Mn retailers for sales in this festive season.

For the past several years, both Amazon (with its Great Indian Festival) and Flipkart (with its Big Billion Days) have run their respective online sales ahead of Dussehra and Diwali in India. Both companies spend hundreds of millions of dollars on their event advertisements, retailers’ onboarding concessions, hirings, infrastructure, and more.

For instance, last year, Amazon hired nearly 110K seasonal workers, had over 60 fulfilment centres across 15 states and increased its warehousing capacity by 40% compared to 2020 for the festive season. Flipkart, too, doubled its supply chain capacity, added over 75K new sellers on its platform and made celebrity endorsement spends. 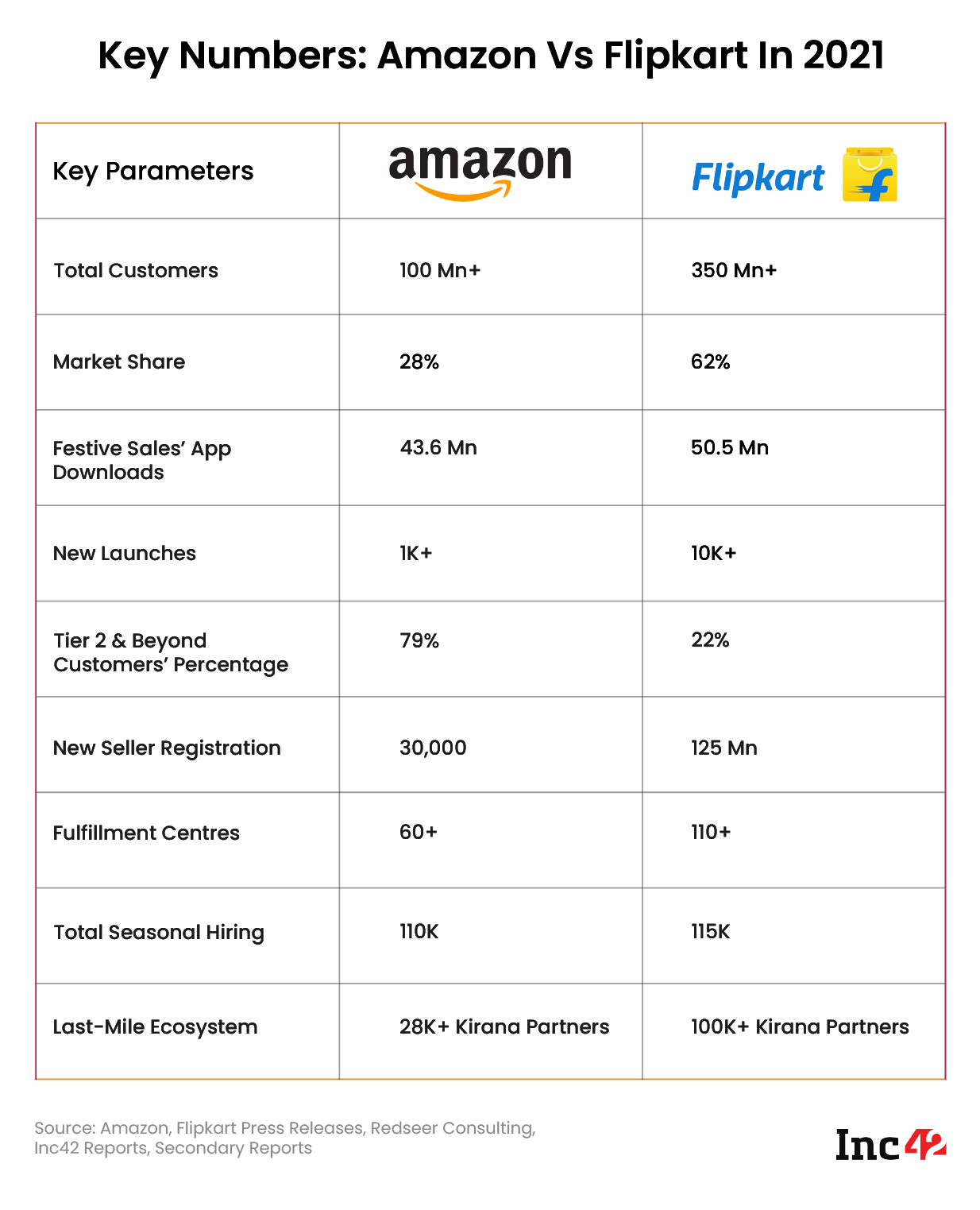 The story seems to be no different in 2022 as both the companies prepare to grab a big share of the Indian ecommerce market, which is pegged to reach $400 Bn by 2030.

The festive sales on both the platforms begin in less than a week (September 23), and Amazon India and Flipkart are already going all out with new launches, waiver of seller fees, influencer marketing and more. 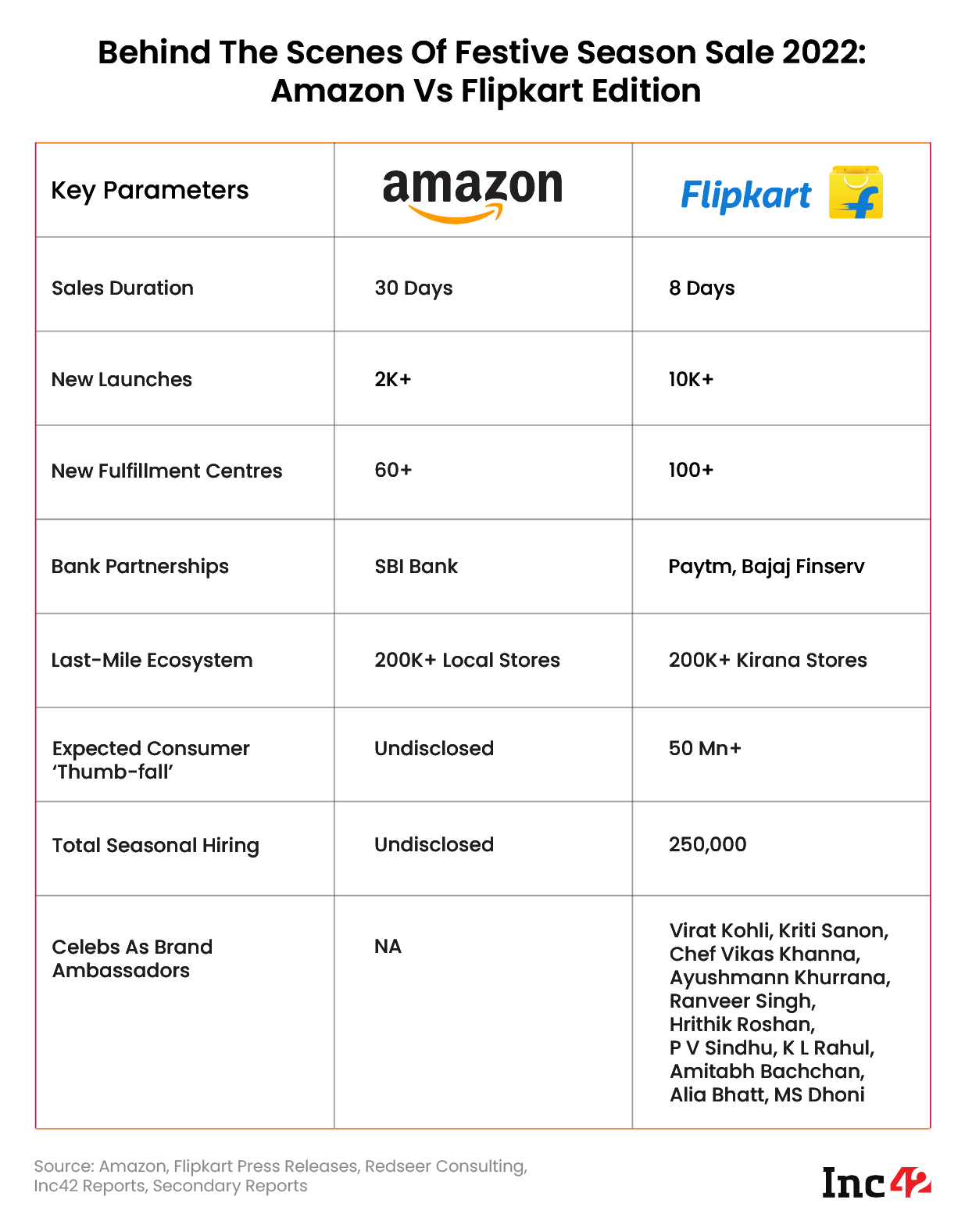 To help new sellers start their ecommerce journey with festive sales, Amazon is giving a 50% waiver on selling/referral fees for sellers who join the platform between August 28 to October 26.

Further, Amazon also stated that it has expanded its fulfilment centre network and increased its storage capacity by 40%. It now has over 60+ fulfilment and sortation centres across 19 states, over 1,850 Amazon-owned partner stations, 28K+ ‘I Have Space’ partners and over 1K seller flex partners.

“We have over a million sellers from India who will have the opportunity to showcase their products to customers across the country during the festive season,” Vivek Somareddy, director of fulfilment channels at Amazon India, previously said.

The company is also hiring seasonal workforce to meet the demand during the festive season. Amazon has also strengthened its partnership with the Indian Railways and now has a total of 325 inter-city transportation lanes for the movement of customer packages.

Flipkart, on the other hand, claims to have expanded its hyperlocal network to deliver its products with over 200K kirana delivery partners. Around 1.1 Mn businesses, including those on its social commerce platform Shopsy, will participate in the festive season. Flipkart has also partnered with the Indian Railways and Mumbai local trains for branding, pamphlets and outreach activities.

Further, the Walmart-backed Indian ecommerce giant is also likely to increase its seasonal workforce to 250K from 115K. Besides, it will also create indirect employment in the form of vendors, trucking partners and associates who will join its seller partners. Flipkart’s fashion brand Myntra alone has created over 16K jobs in roles such as delivery, logistics and warehouse handling.

The company claims that it has onboarded hundreds of last-mile delivery hubs across the country. Flipkart’s largest fulfilment centre in Haringhata, West Bengal, will process 1 Mn shipments a day, and it expects 50 Mn+ shoppers to visit the app during the eight days of the ‘Big Billion Days’ sale.

Flipkart had already started experimenting with an ‘immersive shopping experience’. Now, the Big Billion Days sale will see Flipkart opening up video and virtual commerce, wherein buyers can have an interactive, 3D discovery experience. Several new product launches will also be made via games, interactive videos and live streams.

In a recent interview to the Times of India, its CEO Kalyan Krishnamurthy said that the app’s layout, typography, iconography, colours, animation and navigation have also been revamped.

Amazon, which was surveying its consumers for their experience on the app over the past year, has also made some changes in the app layout, navigation and animation. Besides, it recently introduced a reward system ‘Diamonds’, similar to Flipkart’s SuperCoins.

“The Amazon Metaworld will give customers an entry into the Amazon universe – a virtual destination that will let you experience your favourite Amazon categories…and meet their favourite influencers,” Noor Patel, VP, HCTP at Amazon India stated.

Besides the discounts on offer, Amazon and Flipkart have respectively partnered with banks to offer BNPL services, additional discounts and no-cost EMI facilities to further incentivise their customers to shop.

Flipkart has also tied up with Swiggy, Dominos and the Rebel Food group companies to curate Big Billion Days combos for their consumers. It is also running certain offers on Google Pay to onboard more buyers.

While the amount spent by the companies on advertisements for the festive season is not clear, Amazon India in FY22 had spent nearly INR 3,500 Cr in advertising. The company is likely to have kept the momentum going. Although it has not partnered with any A-List celebrities, the Indian arm of the US-based giant will be looking at influencer and social media marketing for the 2022 festive season.

While both the companies have gone all out to attract customers during the festive season, it remains to be seen if the challenges they are facing will have any bearing on their performance. Both Flipkart and Amazon are under government radar and have been accused of stifling competition, allowing fake reviews and favouring their own sellers. Of late, the government seems to be tightening its screws on the violation of various norms by the ecommerce giants.

Besides, the rise of direct-to-consumer (D2C) brands over the last few years also pose a challenge to them. The performance of the ecommerce giants this festive season is likely to give an insight on their preparedness to take on the existing and upcoming challenges, including the Open Network for Digital Commerce.