While some property and scooters got affected, thankfully, all employees are safe and things are under control: Ather

As per sources, the real cause of the fire is now under investigation

The EV startup has delivered 3,779 units of its scooters in April 2022

In another incident related to an electric two-wheeler fire in the country, Ather Energy reported a fire at one of its experience centres in Chennai on Friday (May 27).

“…there has been a minor fire incident at our premises in Chennai. While some property and scooters got affected, thankfully all employees are safe and things are under control,” said the electric two-wheeler manufacturer in a statement on its social media platform. 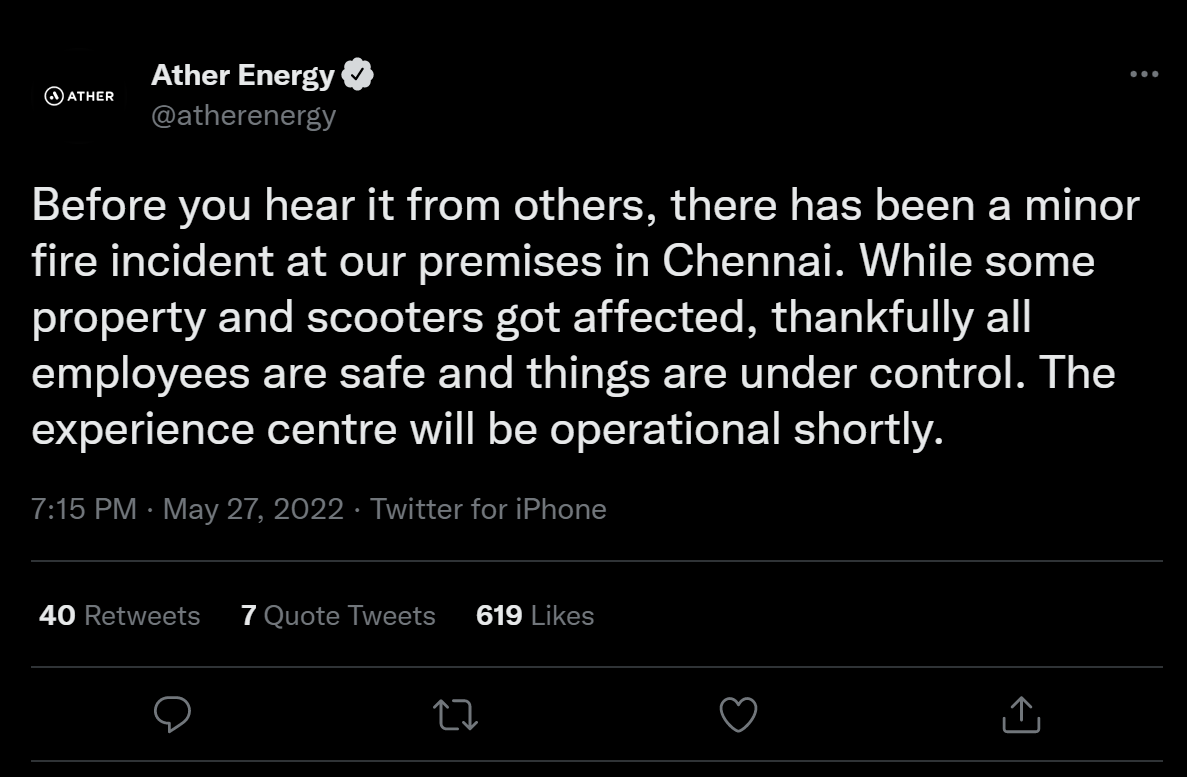 The EV startup hasn’t issued any media statement when Inc42 reached out for more comments. However, as per sources, the real cause of the fire is now under investigation.

Escooter fire incidents are no more rare in India after more than 30 scooters of several companies have burnt in separate incidents since late last year. However, Ather Energy’s name joining the list comes unexpectedly since the startup has never reported such an incident in the last four years of its first ebike launch and the industry experts have always been heavily reliant on the quality of products that it manufactures.

In fact, amid the frequent reports of escooter safety incidents in India, talking to another publication two weeks back, the startup’s chief business officer Ravneet S Phokela reiterated how safety has always been Ather Energy’s top priority.

Experts have been repeatedly pointing at the poor quality of imported lithium-ion cells and batteries, and the lack of R&D under Indian conditions as the primary reasons behind the previous fire incidents. However, it is pertinent to note that unlike its competitors in the market who have been in a hurry to launch their vehicles, Ather Energy started its journey in 2013, and launched its first ebikes in 2018.

The startup has also been designing and manufacturing its batteries in-house.

During the last fundraising, the electric vehicle (EV) startup also said that it delivered 3,779 units of its scooters in April 2022. It is important to note that despite such a high number of sales, no individual safety incident has been reported against the manufacturer.

An unverified tweet said that a Photon escooter manufactured by Hero Electric was charred after it caught fire in Odisha but the company attributed the incident to a short circuit at the charging socket of the escooter.

While the investigation around these fire incidents is on, the Defence Research & Development Organisation (DRDO) has reportedly found that the recent escooter fires related to Ola Electric, Okinawa Autotech, Pure EV, Jitendra EV and Boom Motors were a result of defects in the scooter batteries, including the designs of the battery packs and modules.

The Ministry of Road Transport and Highways had appointed the Centre for Fire, Explosive and Environment Safety (CFEES), the fire science and engineering arm of DRDO, to investigate the multiple escooter fire incidents. The committee of experts is expected to submit the report on May 30.

After a voluntary recall notice by the government think tank Niti Aayog, these companies have already recalled a few units of their escooters. It is yet to be seen if Hero Electric, Ather Energy and Ampere Electric Vehicles would also have to recall their escooters following the new fire incidents.