Of these, 11.8 Mn pieces were spam. The platform also took action against 2.5 Mn pieces for violent and graphic content and 2.1 Mn pieces for adult nudity and sexual activity.

Other sections under which the content pieces were ‘actioned’ included suicide and self-injury (715.2K), child sexual exploitation (696.2K), child nudity and physical abuse (220.2K), bullying and harassment (269.9K), among others. The proactive action rate on the platform in March stood between 64.5% and 99.8%. 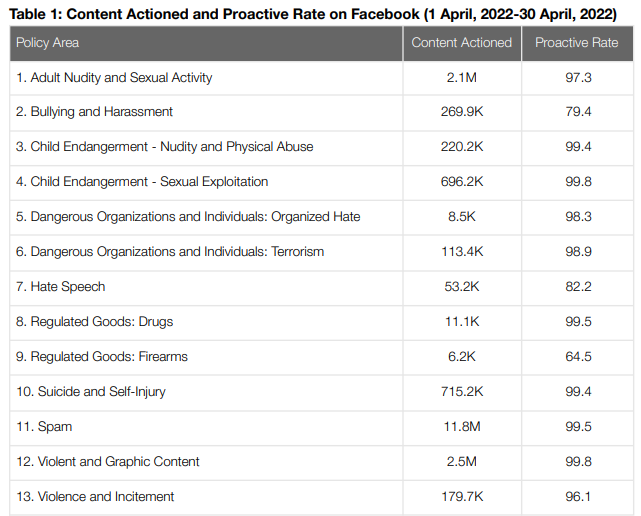 According to Meta, the proactive rate indicates the percentage of all content or accounts the company found and flagged before being reported by users.

Between April 1 and April 30, Meta said Facebook received 661 reports through its Indian grievance mechanism. Of these, 177 cases pertained to fake profiles, while 187 cases related to issues regarding accounts. Other cases related to matters such as lost access, abusive content, among others.

Facebook said it provided tools for resolution of issues in 481 cases. For the remaining 180 cases, the platform took action on 121 reports, while the remaining 59 cases were yet to be acted upon.

Instagram also took action against 2.45 Mn pieces of content on its platform between April 1- April 30, 2022. Most of the actioned content pieces related to suicide and self-injury (847K), violent and graphic content (510.7K), adult nudity and sexual activity (439.1K), bullying and harassment (331.5K), among others. 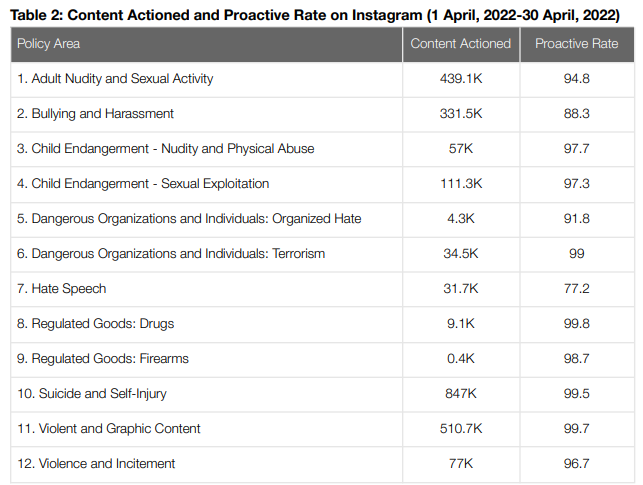 In the monthly compliance report, Meta said that Instagram received 6,246 grievances via its local issue redressal mechanism. Of these, the platform provided tools for resolution in 1,260 cases. Specialised review was needed for the remaining 4,986 reports, and action was thereafter taken on 2,777 reports. The remaining 2,209 reports continue to remain pending and have not been acted upon yet

Meanwhile, Twitter, in its latest compliance report, said that it received 1,480 complaints in India between March 26, 2022 and April 25, 2022, and took action against 1,494 uniform resource locators (URLs) during the month.