After Binace CEO’s denial of the acquisition of WazirX, experts believe that government will most likely step in

The latest developments could lead to the suspension of WazirX’s services in India, the experts said

On Friday, the ED froze the bank assets of WazirX in an alleged case of money laundering by the crypto exchange

The war of words between Cayman Islands-based crypto exchange Binance and India-headquartered WazirX is out there for the world to see. As of now, questions loom over the ownership structure of the crypto exchange in terms of operations and equity, as well as the 2019 deal announced by both platforms in a blog post back then.

In a statement on Friday (August 5), the ED said that the investigation is going on, but the blame lies with WazirX and its director for not cooperating with the agency when the details were sought related to KYC in several transactions that involved money lending companies. The purchased crypto assets were further diverted to foreign wallets, it added. 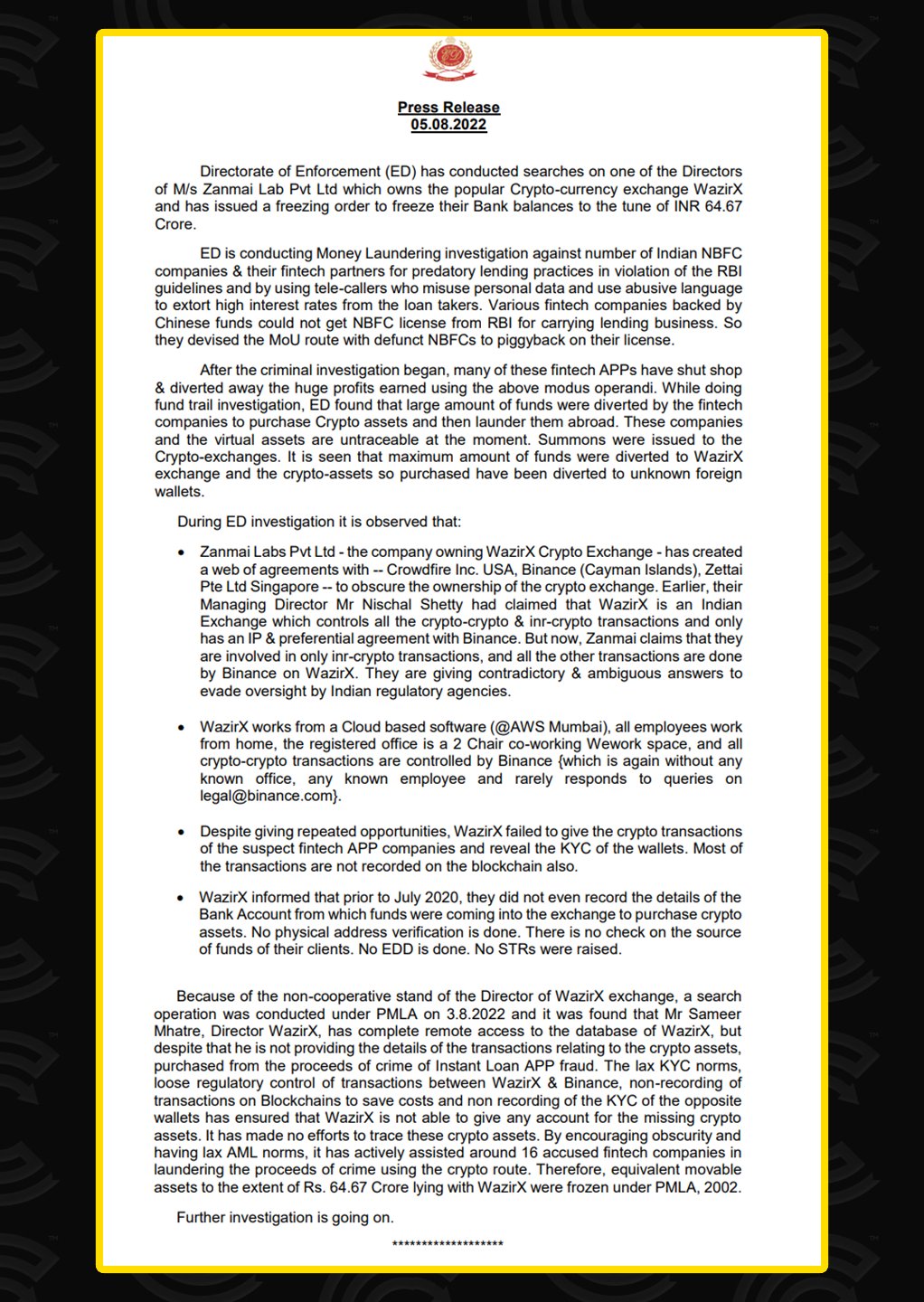 Meanwhile, WazirX, in a statement, told Inc42 that it doesn’t agree with the ED’s statement and will evaluate further plan of action.

However, this is not WazirX’s first brush with the ED.

Minister of State for Finance Pankaj Chaudhary on Tuesday informed Rajya Sabha that the ED is probing alleged money laundering of INR 2,790 Cr through WazirX. The ED is investigating two cases against WazirX under the provisions of the Foreign Exchange Management Act, 1999 (FEMA), the minister said.

“In one of the cases, investigation done so far has revealed that one Indian Crypto-exchange platform, WazirX, operated by Zanmai Labs Private Limited in India was using the walled infrastructure of Cayman Island based exchange Binance. Further it has been found that all crypto transactions between these two exchanges were not even being recorded on the blockchains and were thus cloaked in mystery,” Chaudhary said.

Earlier this year, RBI Governor Shaktikanta Das described cryptocurrencies as a major threat to the macroeconomy, adding that those investing in cryptocurrencies should do so at their own risk.

Is WazirX On Its Way Out Of India?

While it has been widely reported that WazirX, India’s largest cryptocurrency exchange, has a parent entity Zanmai Labs Pvt Ltd, which is an India-registered entity, the 2019 acquisition of the Indian exchange by Binance was believed to have changed the former’s control structure.

This also raised concerns among the Indian authorities about the capital outflow from India (through illegal means) to crypto exchanges registered in other countries.

The association with Binance, which has Chinese origins, and the off-chain transfer of cryptos from WazirX to Binance wallets, which makes it difficult to trace the origin of sellers and buyers, further compounded the problems of WazirX, according to experts.

“This off-chain transfer which was announced is what has given rise to many speculations on the traceability of those involved in the transactions since the same doesn’t happen on blockchain. Ideally, all crypto transfers on blockchain are traceable via the account links, which isn’t the case with off-chain transfers,” Aditya Singh, a popular crypto influencer and co-founder of Cryptoo India, said.

Kashif Raza, founder of Bitnning, in a series of tweets, said that the current WazirX-Binance tussle rose due to the regulatory arbitrage. 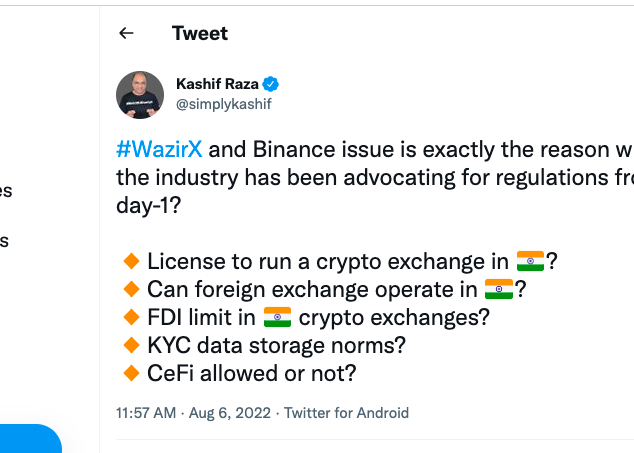 The mounting woes of WazirX have also given rise to questions about its operations in India.

“Suspending the services of WazirX seems very likely considering the tussle over who is owning this exchange and also reports of cofounders having moved out of India to Dubai. This could actually be a tipping point followed by some strict protocols that the government may introduce in the crypto bill,” a crypto startup founder, who didn’t want to be named, said.

WazirX was set up by Nischal Shetty, Sameer Mhatre and Siddharth Menon in 2017 as a peer-to-peer crypto exchange. In November 2019, it was announced that Binance acquired the crypto exchange for an undisclosed amount. However, the contours of the deal were never made public.

Binance CEO Zhao has now pledged his support to the ED for investigating WazirX after saying that his company never acquired the Indian crypto exchange.

“We asked for transferring of WazirX system source code, deployment, operations, as recently as Feb this year. This was refused by WazirX. Binance do NOT have control on their systems. WazirX has been uncooperative with us, and looks like uncooperative with ED as well,” the Binance CEO said in a tweet.

Commenting on the development, a crypto influencer said, “The entire crypto ecosystem is shocked and it will be very tough to convince the regulatory authorities to have a softer stance towards the industry considering the public war which has played between the WazirX and Binance CEOs. And the first in the line of fire will be WazirX.”

Even if WazirX’s services are suspended, it would lead to uncertainty about the assets held by it and Binance. As per a report by WazirX on its 2021 performance, its trading volume stood at $43 Bn during the year, while it had a userbase of 10 Mn.

While only time will tell what happens to WazirX, the entire saga has raised further questions on the crypto industry which was already facing regulatory issues in India.

The government had received 10 bids from companies with offers to set up 128 GWh of battery capacity under the scheme The three selected...