From the boom of 2020 to layoffs and cutbacks in 2022, edtech’s fortunes have turned in no time, highlighted by BYJU’S huge losses

We cannot recall the last time there was so much buzz around the financial performance of a private company. But such is the hype and anticipation that BYJU’S has created with its months-long delays.

Now that the FY21 numbers are out, the biggest takeaway — aside from the questionable revenue recognition changes — is that BYJU’S is far away from the profitable company that many expected it to be given the massive funding and its scale across the world.

Given that it’s a VC-funded startup, losses are, of course, not out of the ordinary and indeed many of BYJU’S rivals are in a similar position. But the fact is that edtech is on a precipice and it can either take a step back or continue ahead to its fall. We explain why, but first a look at our top stories this week:

From the boom of 2020 to layoffs and cutbacks in 2022, edtech’s fortunes have turned in no time — highlighted by nearly 5,000 layoffs in edtech, including unicorns such as Unacademy &  Vedantu, and the shutdown of the likes of Lido Learning.

BYJU’S, which should be flying the flag for edtech, is also losing steam — with 20X higher losses in FY21. Analysts and investors believe India’s second-highest valued startup (after Flipkart) may see a funding round at a lower valuation, or a down round, for the first time in its history. And this could be a major blow to the confidence in edtech as a sector.

Beyond questions of what it means for the startup ecosystem, we wanted to see what exactly BYJU’S can do to fix its course and whether this lesson extends to other edtech giants such as Unacademy or Vedantu that are also saddled with expenses and run in losses.

Cofounder and CEO Byju Raveendran did not have a clear answer as to when BYJU’S might reach profitability. He said that at the end of the next two quarters i.e by the end of FY23, the company would be in a position where BYJU’S, Aakash, Great Learning would start becoming profitable on a standalone basis.

But Raveendran admitted that WhiteHat Jr will continue to be a cash burn business for the foreseeable future and this could complicate overall profitability. The customer acquisition puzzle in WhiteHat Jr has been tough to crack because the company is targeting international markets, the CEO said. Acquired for $300 Mn in August 2020, WhiteHat Jr reported a total loss of INR 1,118.25 Cr in FY21, or 26.73% to BYJU’S total loss of INR 4,588 Cr.

Cashing in on edtech momentum, startups attracted a large number of new students and funding in FY21 and FY22, but expansion has remained a costly endeavour. And now, the slowdown has led to cost-cutting measures, and mass layoffs which have left a bad taste among employees even if they do improve gross and net profit margins in FY23.

However, this could be another case of startups showing a profit on paper and on their books, but where future scale and growth would result in a loss again. This is exactly the case with BYJU’S which reported a profit in FY19, but then immediately fell into the red.

For instance, it spent over $2 Bn in acquisitions as Raveendran pointed out this week, plus its marketing spend in FY21 was 3X the combined marketing spend of Unacademy, upGrad and Vedantu.

BYJU’S poor financial picture caught the attention of pretty much everyone in the startup ecosystem as well as noted business personalities such as Harsh Goenka and Kiran Mazumdar-Shaw, both of whom question how the company is valued at $22 Bn. 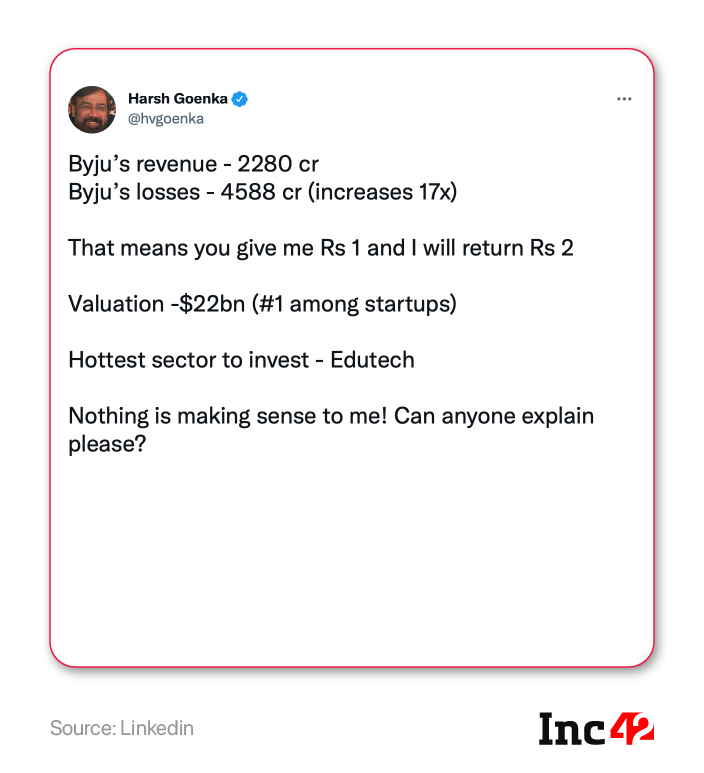 Of course, this is not the first time that someone is questioning the valuation and the revenue multiples for BYJU’S. “With losses up as much as 19X in FY21 (INR 4,588 Cr) when they should have done reasonably well, why should anyone give them a valuation which is 75 times their revenue? This should have the current and future investors worried,” a growth-stage investor told Inc42.

“This is truly astounding! How on earth was the company even accounting for subscriptions any other way?? And VCs, PEs, endowments, etc, were sitting around, happily allowing such stuff to happen, while preaching the value of something called  ‘Governance’ to the rest?!” said veteran investor Shankar Sharma.

However, others such as Portea’s K Ganesh believe that losses due to changes in accounting practices might not exactly harm BYJU’S valuation in future funding rounds. It remains to be seen how much enthusiasm investors might have for this company after its most recent performance.

Is It Time To Scale Down?

In private conversations, investors believe that perhaps edtech giants such as BYJU’S and Unacademy have reached a scale where profitability might remain elusive for many years.

Supporting a scale of 100s of millions of users requires unusually high resources and this is likely to continue biting edtech companies till they realise their entire model hinges around sales and pricing.

Even lowering the product pricing and reaching the masses might not deliver immediate profits, because the edtech’s scale is built around high prices and is driven by sales at the moment.

For customer acquisition cost to lower, edtech companies have to revamp their commission-centric sales model to outcome-driven sales. While the overall messaging from edtech has been about revolutionising education, the reality is that they are simply trying to replace offline coaching classes and often charge the same amount of fees.

Given this, the models of all edtech companies revolve around the salesforce, with teachers taking the backseat and often the first in the line of fire when it comes to layoffs.

Sales being the centre of operations has skewed the belief of startups that massive scale will eventually beget profits. Time to bring the focus back on education in edtech.

The BSE and NSE crashed this week under inflationary pressure and a possible US Federal Reserve’s rate hike, with pressure on stocks from IT and media sectors.

Unsurprisingly, a number of new-age Indian tech stocks also fell this week in line with the overall downfall, but CarTrade and EaseMyTrip bucked the trend with decent gains over the past five trading sessions. 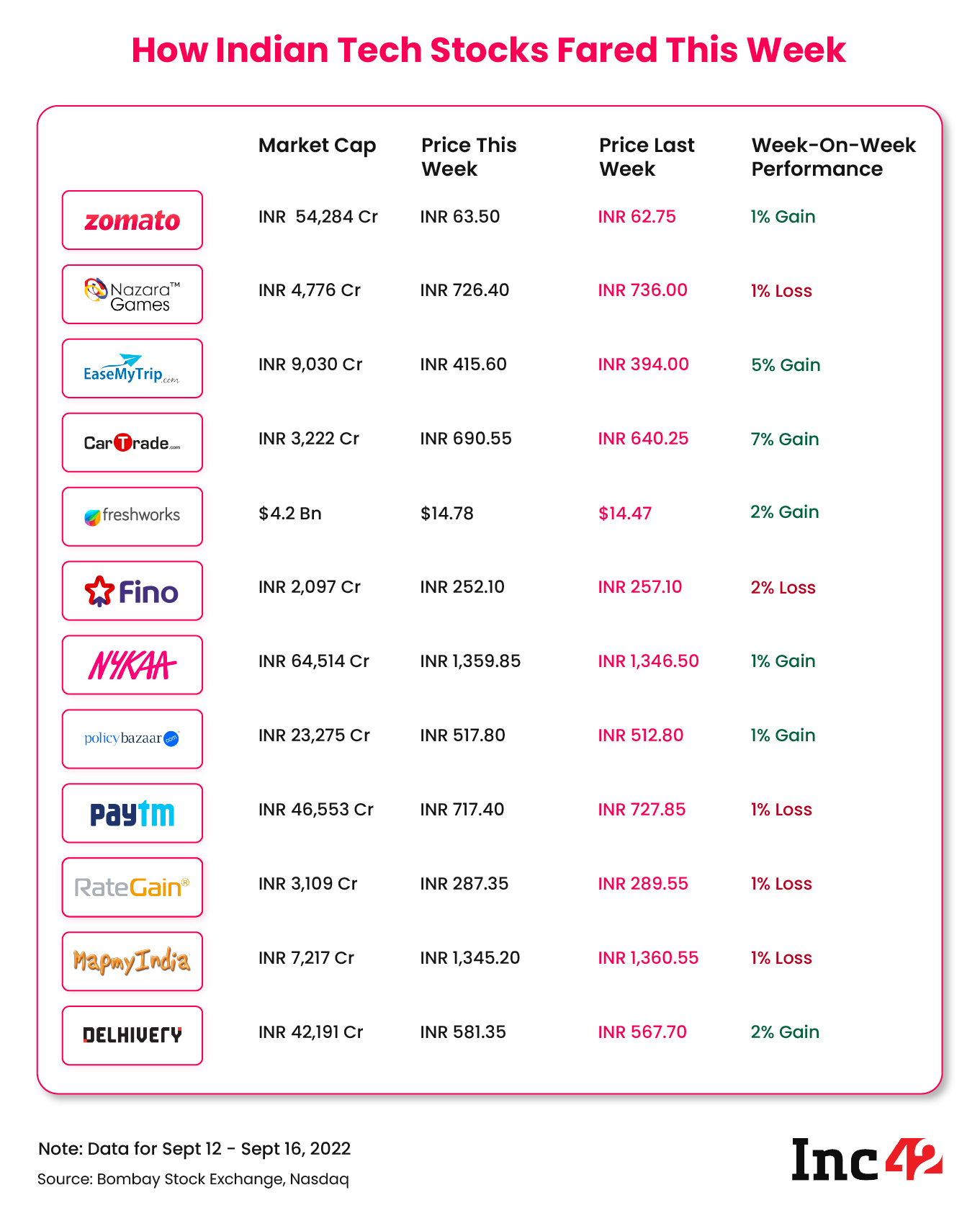 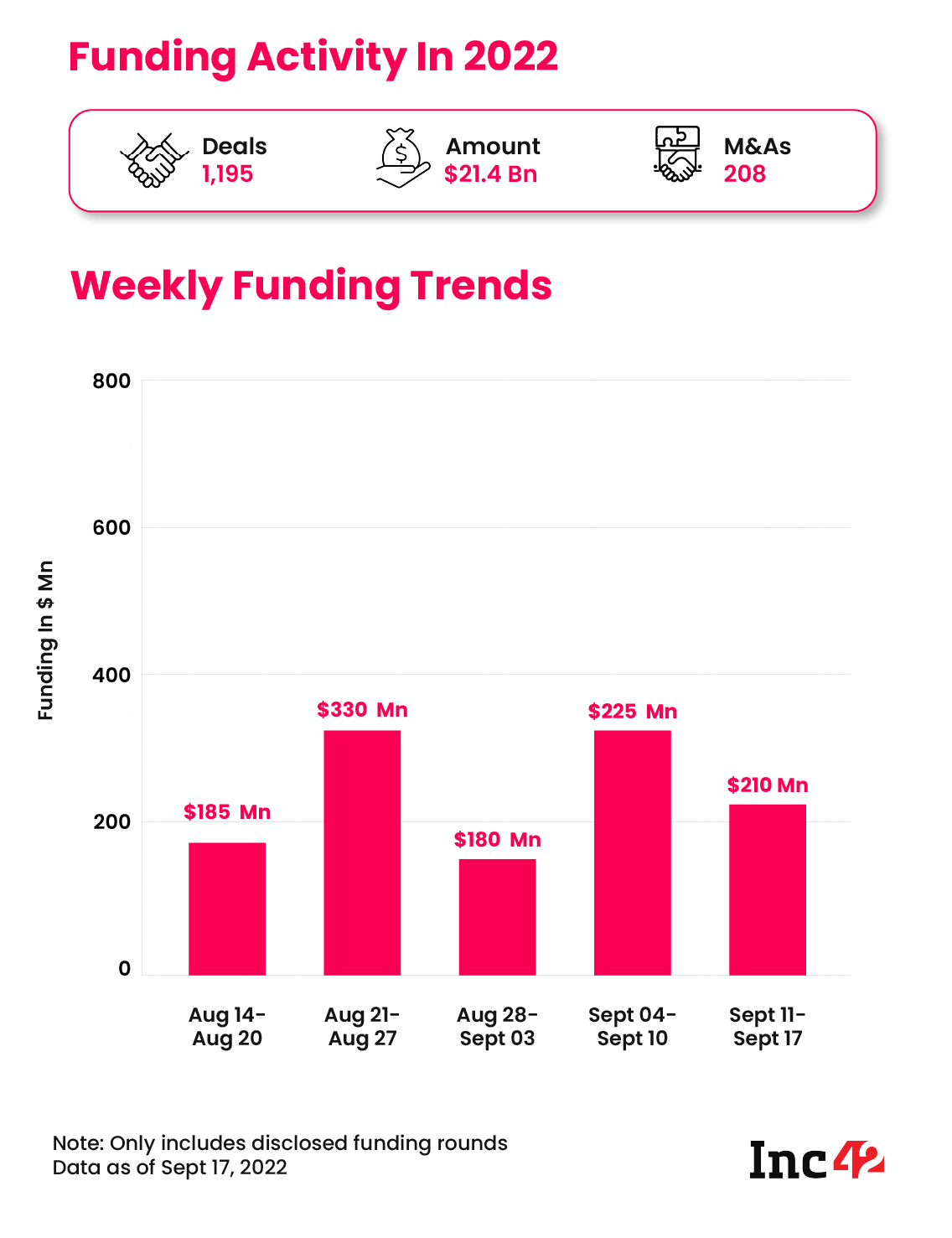 That’s all for this Sunday