Denying media reports, Singhal said that the “last few days’ events” are not about money laundering

On Thursday, the ED conducted raids on the residences of directors and the CEO of Coinswitch Kuber and its official premises

Days after the Enforcement Directorate (ED) carried out raids on the premises related to Coinswitch Kuber, the cryptocurrency exchange’s CEO Ashish Singhal said that it is cooperating with the ED.

On Thursday, the ED conducted raids on the residences of directors and the CEO of Coinswitch Kuber and its official premises. According to reports, the raids were conducted in connection with violation of the Foreign Exchange Management Act (FEMA) norms.

However, Singhal, in a Twitter thread, said that the ED is engaged with Coinswitch Kuber to understand the functioning of the crypto exchange. Denying media reports, he said that the “last few days’ events” are not about money laundering or Prevention of Money Laundering Act (PMLA). 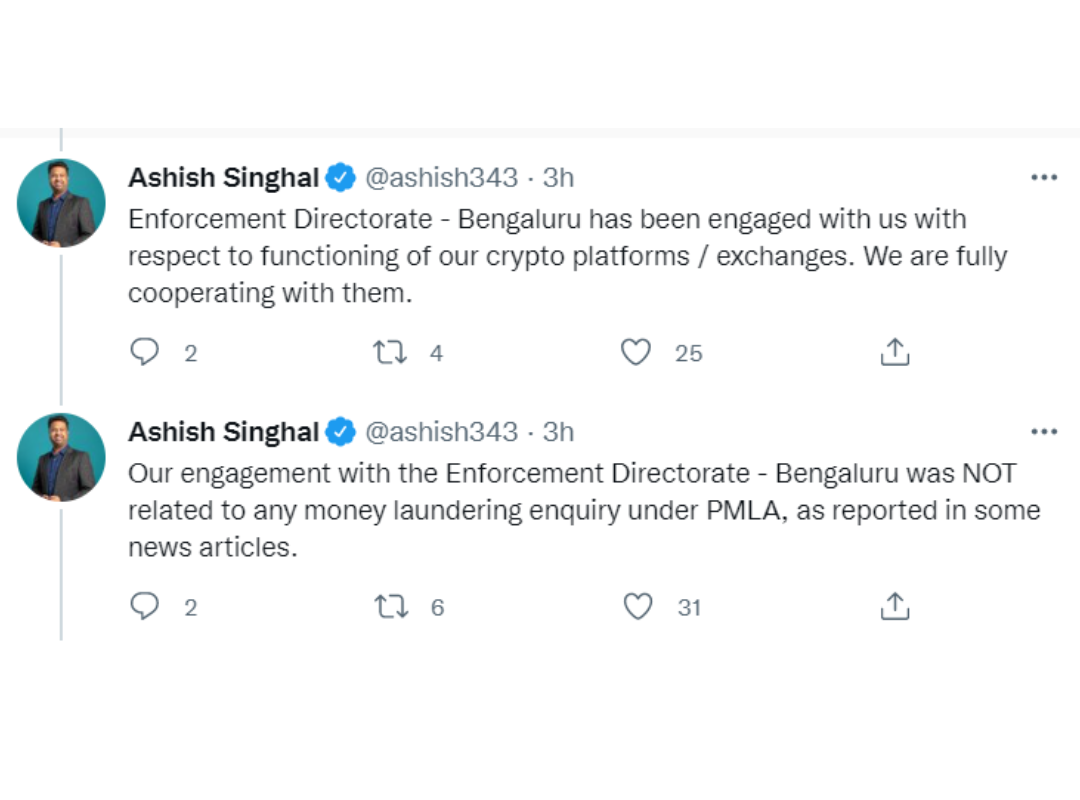 Clarifying on the events of the last few days, Singhal said that crypto is a new asset class and not clearly classified in most parts of the world. The regulators in India, as well as in many other countries, are assessing if crypto is a “commodity”, “security”, “currency” or something new.

“This is a work in progress,” Singhal noted. The classification of crypto and the nature of business models are important to decide how and what laws would govern foreign exchanges and if those are applicable at all, he added.

“As an industry leader in India and one of the most compliant crypto platforms, we have been engaged in constructive dialogues with various stakeholders to help them understand our business models, best compliance practices, thereby bringing more clarity on such matters,” the CEO said.

Following the ED raids, CoinDesk, quoting a source, reported that the ED was looking into multiple possible contraventions under FEMA by Coinswitch Kuber and connected entities.

“Since we did not receive the desired cooperation we have conducted searches on (residences) of directors, the CEO and the official premises,” the source was quoted as saying.

The development comes at a time when crypto exchanges in India are under high level of scrutiny. Earlier this month, the ED froze another cryptocurrency exchange WazirX’s bank assets worth INR 64.67 Cr in connection with a money laundering case.

The Reserve Bank of India (RBI) is staunchly opposed to cryptocurrencies, with its top officials raising concerns about cryptos multiple times over the last year or so. During the Monsoon Session of the Parliament, Finance Minister Nirmala Sitharaman said that the central bank is of the opinion that cryptocurrencies should be banned.