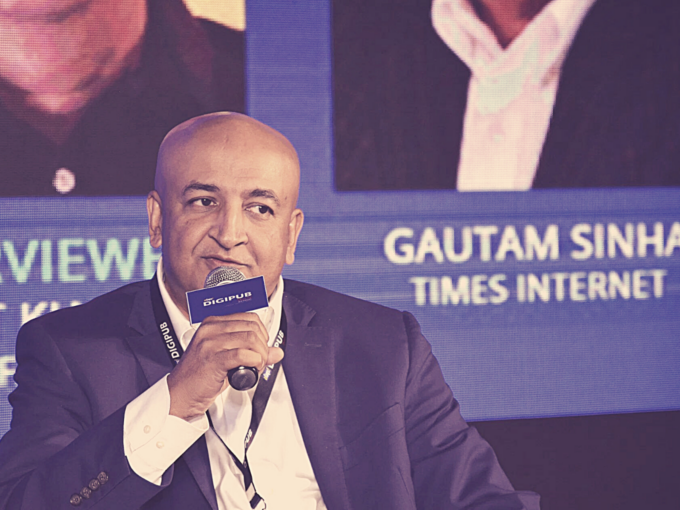 Times Internet CEO Gautam Sinha has resigned from his position as the head of the company and is set to leave the Times Group after 15 years, according to multiple sources who spoke to Inc42 on the condition of anonymity.

Times Internet vice chairman Satyan Gajwani made the announcement of Sinha’s departure at a town hall meeting today (Monday, March 07, 2022) at the company’s office in Gurugram. Gajwani announced that Sinha’s last working day would be March 31, 2022.

Sources told us that until a replacement is appointed, Times Internet’s chief operating officer Puneet Gupt would be the interim CEO.

Sinha has been associated with The Times of India Group — India’s largest media company — since 2007, and served as the chief operating officer and chief technology officer till 2016.

In April 2016, Sinha was appointed as CEO of Times Internet, as the TOI group looked to expand into digital products, platforms and services. He replaced Satyan Gajwani, who was promoted to the managing director position at the time.

He also oversaw the group’s acquisition of MX Player, and the subsequent launch of MX Takatak, which quickly became a short video sensation.

Sinha’s departure comes at a time when Times Internet is seemingly exiting many of its internet businesses.

In February this year, MX TakaTak announced a strategic merger with ShareChat’s Moj to create the largest short video platform which will be controlled by ShareChat. While neither company has confirmed the transaction size, it is reported to be in the region of $700 Mn.

The combined platform is expected to have 100 Mn creators, 300 Mn monthly active users and nearly 250 Bn video views. MX TakaTak will eventually be merged with ShareChat’s Moj as the merger is finalised in due course.

Besides this, Times Internet-owned Dineout is also close to being sold to food delivery giant Swiggy. Swiggy is in the final stages of the acquisition talks and the deal is expected to close at $150 Mn-$200 Mn, multiple sources had told Inc42 in February this year.

Jain Vs Jain: A Rift Inside Times?

Incidentally, reports have indicated an alleged rift inside the Jain family between brothers Samir Jain and Vineet Jain. Samir Jain is the vice chairman of the company, while Vineet Jain is the managing director.

The Jain family owns and operates The Times Group as well as The Times of India, India’s widest read English daily and Times Internet. The disagreements between the Jain brothers, which was reported by The Morning Context earlier this month, are alleged to be around how the company should be run and what direction the media behemoth should take to revive growth, which has slowed down in the past year.

It remains to be seen how the media giant will look to change things around, and the exits of MX Takatak and Dineout might well be a sign that it might indeed exit some of the companies that would have required sizable capital investments in the future to scale up.