The retail giant is set to join startups such as Globalbees, Mensa Brands, Thrasio, Good Glamm Group, GOAT Brand Labs among others

The idea is not to become a platform for brands, but to enable brand-building and ensuring customer loyalty

India’s D2C revolution is drawing in corporate giants and traditional companies like a magnet. Till two decades ago, the ‘Tata, Birla, Ambani’ set were the mega corporations that entrepreneurs looked up to, but now these traditional giants are turning to startups and their new-age approach for inspiration. If the super app ambitions of Tata and Reliance are one part of this, Aditya Birla group’s decision to focus more heavily on the D2C and ecommerce space is another sign of this transition.

Earlier this month, Aditya Birla Fashion and Retail Limited (ABFRL) announced plans to build a portfolio of new-age, digital brands (D2C) across fashion, beauty and allied lifestyle segments through a new subsidiary. While plans are still being solidified, the company’s MD has outlined its goals as it looks to enter a space that’s getting increasingly crowded. ABFRL’s managing director Ashish Dikshit also believes it’s time the company aligns itself with the evolving market.

The retail giant is set to join startups such as Globalbees, Mensa Brands, Thrasio, Good Glamm Group, GOAT Brand Labs among others in building a ‘house of brands’. As the number of D2C brands and online sellers in India has grown over the past couple of years, we are seeing many house of brand plays.

Companies and startups are realising that many of these brands might not have the resources to scale up or find the right supply chain or may even lack the marketing edge and vision needed to succeed in the digital commerce ecosystem. Dikshit told us that the company has the right pedigree, experience and network that early-stage digital-first brands can leverage.

The vision for a D2C ‘house of brands’ is an extension of Aditya Birla’s years of experience in the retail space, where it owns brands such as Van Heusen, Pantaloons and has partnerships for the likes of American Eagle, Forever 21 and most recently Reebok. The Kumar Mangalam Birla-led retailer has also backed designer-led brands such as Masaba, Sabyasachi, Shantanu Nikhil and others.

It also launched its homegrown ethnicwear brand for men and women. “If you look at the common thread across all this, the company’s strategy is to build meaningful consumer brands in all spaces that are likely to be large in India as the economy grows and discretionary habits shift,” he told Inc42.

He believes a lot of new entrepreneurs are launching sharply positioned products that are distinct in their own right. And ABFRL as a company needs to remain relevant for the new-age consumers that will emerge and evolve over the next five to seven years.

“We need to start participating in that ecosystem both organically and inorganically. We will grow brands digitally native brands organically as well as invest in a select set of brands,” Aditya Birla Fashion’s Dikshit added.

The Aditya Birla Fashion subsidiary that has been set up for the HoB business will acquire 8-10 brands primarily with its own capital, which is ABFRL investments. These will be early companies with relatively small scale, but those which the company believes have the potential to become large brands over the next 5-10 years.

A banner on the company’s website invites brands to write in with their interest in being acquired by ABFRL and inbound interest is quite high, Dikshit claims. He said that since the resolution has just been passed by the board, Aditya Birla Fashion has not yet begun proactive discussions with any brands yet.

D2C brands, business models and platforms, are arguably the biggest game-changer in retail since ecommerce, with an expected market size of $100 Mn by 2026. In 2021, Indian D2C startups raised $1.81 Bn across 174 deals. The influx of capital has not only resulted in thousands of new brands but also introduced disruptive models such as ecommerce roll-ups, houses of brands and more while giving enablers and digital sellers new opportunities to grow.

While US-based Thrasio pioneered the concept by acquiring and scaling digital-first FBA (Fulfilled By Amazon) brands, we have seen plenty of similar models emerge in India too. Nykaa, GlobalBees, Mensa Brands (India’s fastest unicorn) are some of the domestic players, while Thrasio has also set foot in India with the acquisition of Lifelong. 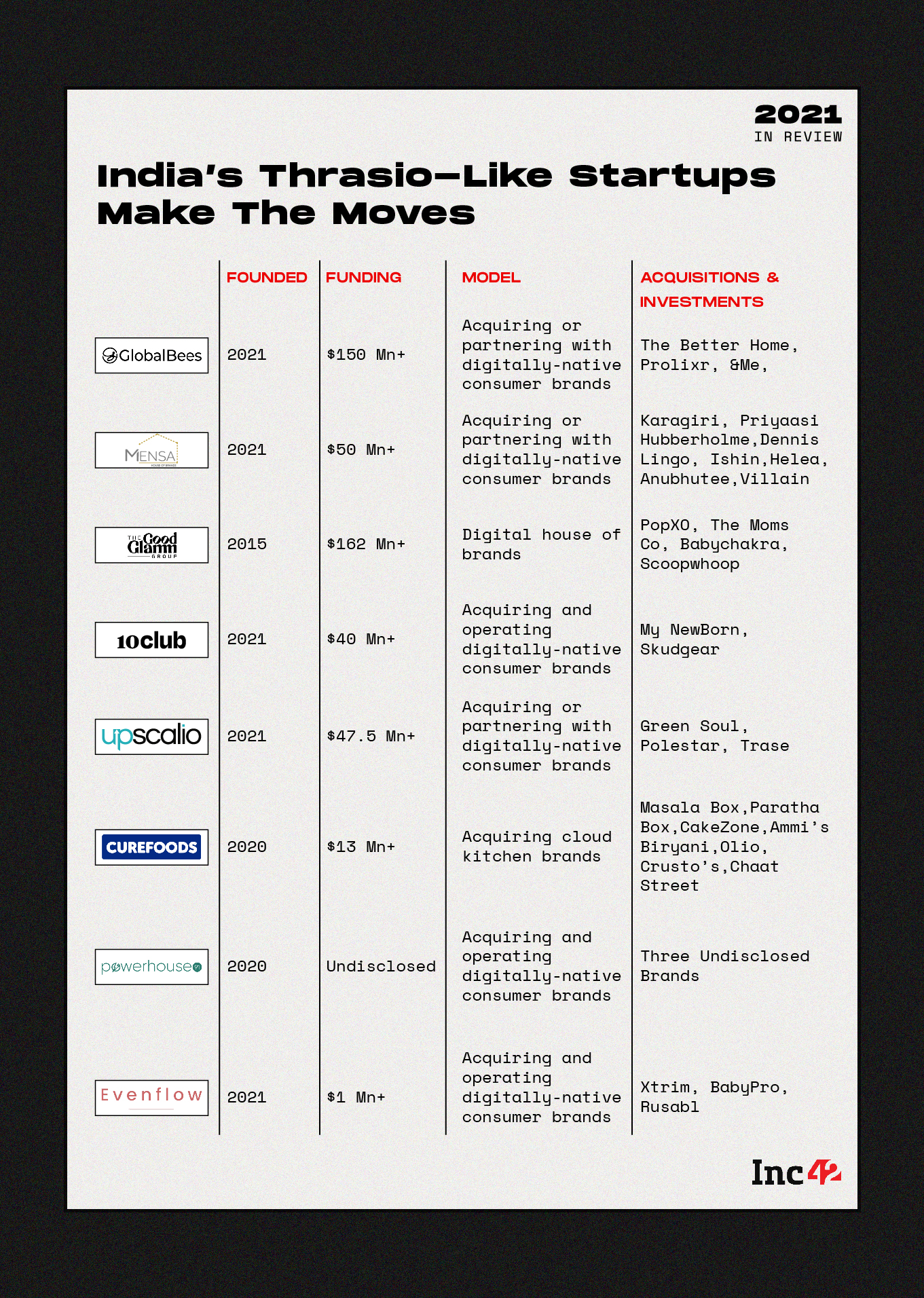 Not A Platform Play: ABFRL

For Aditya Birla Fashion, the idea is not to become a marketplace or a platform for brands, but to enable brand-building and ensuring that consumers have the best options at all price points. Dikshit was clear that the company’s expertise lies in building brands and consumer loyalty, and not in building platforms.

“In my opinion, people don’t buy platforms, they buy brands. Our strategy is focused on building very desirable brands, which are unique and distinctive for consumers. Even on marketplaces or platforms, consumers still look for the right brand.”

Last year, Flipkart invested INR 1,500 Cr in Aditya Birla Fashion, which the company had said would go towards aggressively scaling up its existing businesses and increasing presence in emerging high-growth categories such as innerwear, athleisure, casual wear and ethnic wear.

Many of the recent entrants in the house of brands space have raised millions in funding from VCs and have already made plenty of acquisitions. For the next 12-18 months at least, Aditya Birla Fashion (ABFRL) will leverage funds from its books. “Once we get to a certain size and traction, and we are able to figure out the model which is working, that’s when we’ll raise external capital and that will fund the next phase of churn.”