Sanchali Patel: From Rejection to $1 Million 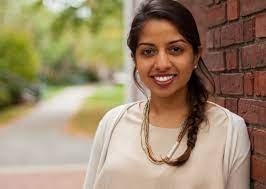 Sanchali Pal, CEO, and founder of Joro tracked her carbon footprint for several years on a spreadsheet. But she realized she needed to build a tool to make the process easier for herself and others concerned about climate change.

The decision to launch a startup aimed at doing that didn’t sprout from one pivotal moment but several life experiences.

Pal worked in Ethiopia during the drought of 2015 and saw firsthand the impact of the climate crisis on farmers with smallholdings. Pal said she was “seeing the droughts and hearing the stories of how quickly farmers’ yields had been changing.”

She spent every other week on field visits to different parts of the country, interacting with government officials, the private sector, farmers, and Agriprocessors. The main issues she saw for farmers were “access to clean energy, or they were at risk because of climate events.”

Pal had also grown up visiting India every year to see family and lived there for a time in high school.

“I was struck by how simple things like energy and water were so scarce,” she said, noting that “you could see that affecting people’s daily lives.” She became further aware of sustainable development in high school when working on summer projects involving solar cookers and solar water heaters.

Another pivotal moment for Pal occurred while she was studying economics at Princeton University, where she was the manager of her dining hall. She watched the documentary “Food, Inc.,” which looked into the harmful effects of America’s corporate farming practices. She realized that her actions mattered, especially in concert with others. It dawned on her that “if we can somehow shift aggregate demand, we can shift the systems that we are a part of.”

We are seeking solutions at scale.

After working in Ethiopia, her awareness that the climate crisis is here and now cemented her decision to pursue an MBA. She felt a business degree would help her understand how to scale solutions.

While at Harvard Business School, Pal immersed herself in the cleantech community in Boston and soon realized that many technologies already existed. But what hadn’t changed, for all that technology, was the fundamental way we live our lives.

“The hard part is changing hearts and minds and actions,” she said.

She thought the tool she envisioned could be beneficial to “build carbon intuition, getting to use carbon as a daily metric.” And then “helping people feel connected to this ambiguous crisis that we’re a part of.”

Still, at the time, she wasn’t sure what form her product would take. After business school, she spent several months making user discovery. Finally, she realized that it needed to be something people use in their everyday lives for a tool like that to be practical. Like Strava, which runners and cyclists use to track and share their workouts, the meditation app Headspace, or personal finance tracking platform Mint.

She also had to consider if the metric for measuring carbon impact would use location data, utility data, or another barometer. She ultimately chose financial data, as it is the best predictor of carbon footprints.

The first year and a half as a startup founder were formidable for Pal.

The low point came when she first tried to raise seed funding in 2018. But, every investor she pitched said no. She went home to her family for Thanksgiving and thought they would suggest she drop the project. Instead, they saw how much she cared and how much conviction she had. They were very supportive.

“I need to build this,” Pal realized, “and I’m going to figure out a way to do it because it doesn’t matter if people are going to give me money to do it or not. So I’m not going to stop until I build something useful to solve this real problem that I know exists.”

Pal emerged with a new resolve. First, she decided to beta test the product with 50 users and then set out to raise from a new set of investors.

She had also realized in her fundraising journey that she was making a few cardinal mistakes. One was that she had focused on pitching investors in the cleantech and impact arenas but needed investors who understood the business model for a consumer app.

Second, she needed to be more convincing about her path. She was initially pitching two models: A direct-to-consumer model and a model to work with businesses that wanted to reach consumers. It convinced her that the correct starting point was to appeal to consumers. Still, in pitching enterprise-focused investors, Pal had been trying to accommodate their points of view.

Pal, who is soft-spoken and thoughtful, also “got a lot of feedback that I needed to speak louder, I needed to sit up taller, and I needed to have more conviction.”

She learned through the process that “it’s OK to have doubts about which direction you’re going to go in. But you need to show that you can pick something and run with it, so having more confidence and conviction in myself.”

The tide started to turn when she raised funding from a couple of angel investors: One of her business school professors and mentors, Shikhar Ghosh, and Venkat Srinivasan, who had said “maybe” the first time around and helped coach Pal to figure out the proof points needed for investment.

Pal then broadened her fundraising to investors in the Bay Area and made contact through a cold outreach to Bryan Schreier at Sequoia Capital.

That cold outreach was the right move: She raised a $1 million pre-seed round — double what she had sought to expand — from Sequoia Capital. Also, Background Capital and Baruch Future Ventures, alongside angel investors,, were new investors.

One pre-seed investor said yes after an eight-minute call, which indicates how far she had progressed since her prior fundraising experience. Pal relocated from the East Coast to the Bay Area soon after to be closer to her investors.

Just over a year after the pre-seed round, Pal raised a $2.5 million seed round led by Sequoia Capital. Schreier, in a LinkedIn live interview after the seed funding closed, said Pal compelled him as a founder with deep conviction alongside the simplicity of the idea.

Alone in the C-suite

Pal is a solo founder, but not by design. She initially had a co-founder, an academic in the space,, who was unable to dedicate time due to the demands of academic research in this area.

“It was challenging realizing I was going to be a solo founder,” said Pal.

Having a co-founder would provide emotional support on a journey where she had experience with economics and consulting but did not know how to build software products, she said.

“But what I’ve also realized is that your early team can take the place of a co-founder. And the early people we’ve hired, now that we have a team of seven have really started to play that role for me in a big way.”

A third of all Americans are alarmed about climate change, according to research conducted in 2019 by a Yale Program on climate attitudes. This has tripled from 2014, representing a huge shift in consumer attitudes.

So far, users of the Joro app have reduced their collective footprint by 10 percent, said Pal. The service has recently launched new tools for users to set aside dollars to be carbon neutral. Users can purchase a blended mix of four different projects. The projects were forestry, soil, and long-term carbon removal. Pal hopes in 10 years, the app will be as ubiquitous as mindfulness apps or health and fitness apps.