Snapchat at Snap Partner Summit 2021 on Thursday received a slew of updates that are aiming to grow its presence among creators, businesses, and developers — a move to counter Facebook’s Instagram. Snap, the parent company behind Snapchat, introduced features called Creator Marketplace and Gifting to help creators attract monetisation. The company has also brought a standalone app called Story Studio that will allow creators to build TikTok-like short videos using various editing tools. Business entities are also getting features such as public profiles, connected lenses, and API-powered lenses to reach Snapchatters.

At the virtual conference, Snap announced that Snapchat now has over 500 million monthly active users, and roughly 40 percent of its total user base is located outside of North America and Europe. The app in India has grown its daily active users by over 100 percent year-over-year in each of the last five quarters, the Santa Monica, California-headquartered company said. It, however, did not reveal the exact number of active users in the country.Snap is trying to grow these numbers quickly with the arrival of its updates. One of the first changes that Snapchat is bringing to the users on the experience is the placement of its Scan feature to the home screen. The augmented reality (AR) utility tool was introduced in April 2019 as a result of the company’s deal with a QR scanning startup called Scan me.

The company said that more than 170 million users in the world are using Scan every month. But to bring to more users, Snapchat will now feature the Scan button on the home screen.

In addition to the interface-level change, Snapchat will now also include a feature called Screenshop within Scan to serve shopping recommendations from hundreds of brands when users scan something from the app. Soon, Scan will also show recipe recommendations powered by Allrecipes — based on ingredients seen through the camera.

Snap has also brought Camera Shortcuts that will suggest camera modes, lenses, and soundtracks on the basis of the content Snapchat camera sees. These shortcuts — along with the homescreen debut of Scan — will start rolling out today. 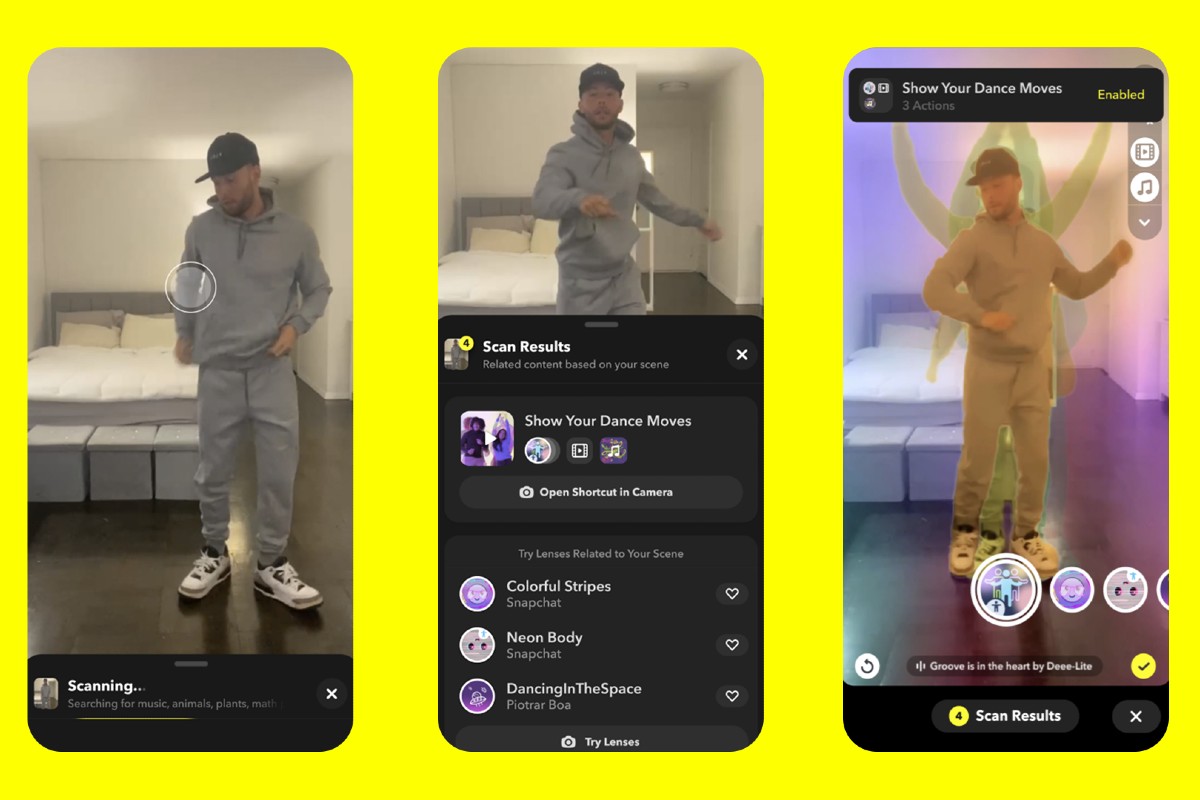 Alongside the updated Scan and new Camera Shortcuts, Snap is updating Lens Studio to version 4.0 to let creators build more interesting lenses across gaming, education, and shopping, among other categories. The company announced Connected Lenses as one of the new features of Lens Studio 4.0 that will allow users to interact together in real-time, no matter whether they are located in the same room or across the world. Snap has partnered with LEGO Group to bring the first Connected Lens to the platform. It will let users build with LEGO bricks collaboratively on the Snapchat app.

Lens Studio is also already touted to be successful in bringing AR content to Snapchat. The company claims that there are over 200,000 lens creators around the globe, who have built nearly two million lenses that have been viewed by users more than two trillion times.

For brands and businesses looking to reach Snapchat users, Snap is bringing new AR try-on experiences. These will be available through the Snapchat camera and will initially have fashion partners to offer an immersive shopping experience.

Snap is also introducing API-enabled lenses to let businesses create dynamic ways to offer real-time content in AR. Beauty tech company Perfect Corp and skincare product maker and marketer The Estée Lauder Companies will be among the first players to use the new AR tools.

Additionally, Snap announced that it is working with select companies to bring real-time content into lenses. American baseball organisation Major League Baseball is one of the first companies to leverage the new offering and bring stats from live games into Snapchat lenses.

Businesses have also offered a way to reach their potential customers and existing consumers on Snapchat through public profiles. They are allowed to showcase their proprietary lenses, highlights, and stories on the platform as well as use features such as AR try-on and API-enabled lenses to enhance their customer base over time. Similarly, Snap brought Creator Marketplace where businesses will be able to directly connect with creators on Snapchat to build new AR experiences. It will also allow creators to monetise their work by developing AR content specifically for businesses.

On the monetisation front, Snap also brought the feature called Gifting that will allow people to pay rewards to their favourite creators on the platform. Users will be able to purchase Snap Tokens to send a ‘Gift’ to the creators through Story Replies. Snap said that creators would earn a share of the revenue from ‘Gifts’ they received. However, it has not provided any details on the commission rate it will charge for the tokens. The feature will roll out later this year on both Android and iOS devices for influencers that the company calls Snap Stars. 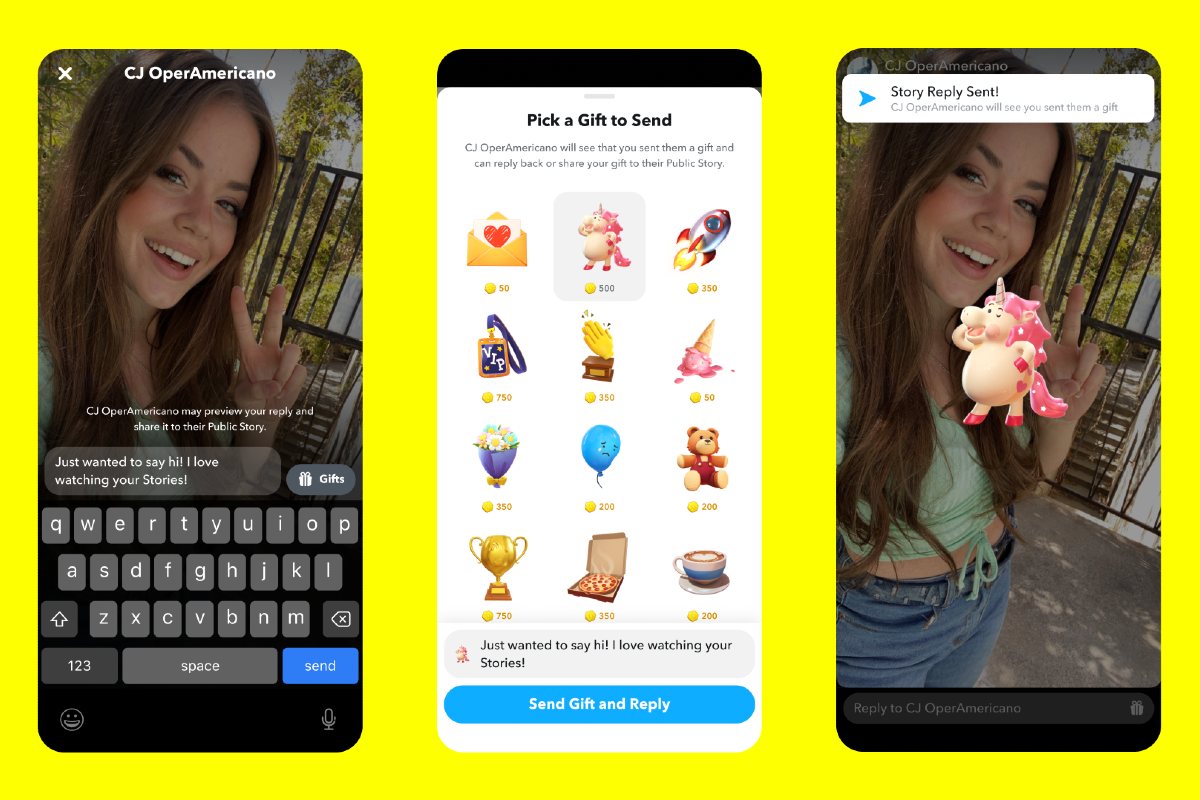 Snap has also announced Story Studio as its new standalone app to help creators build engaging vertical short-length videos that are known as Stories on Snapchat.

The Story Studio app will offer editing tools such as frame-precise trimming, slicing and cutting, as well as frame-precise placement of creative elements like captions, stickers, Sounds and other media layers. It will also let you add visual effects using AR lenses and cross-clip transitions. Further, users will have access to Snap’s catalogue of licensed music and audio clips and insights into trending topics, sounds, and lenses.

Once a video is edited, Story Studio will let you directly post the video to Spotlight or Stories, or download it offline to your camera roll. You can also save and edit projects on the app until you’re ready to share them online.

Story Studio will be available as a free download for iOS users later this year. There is, however, no word on whether it will debut on Android. 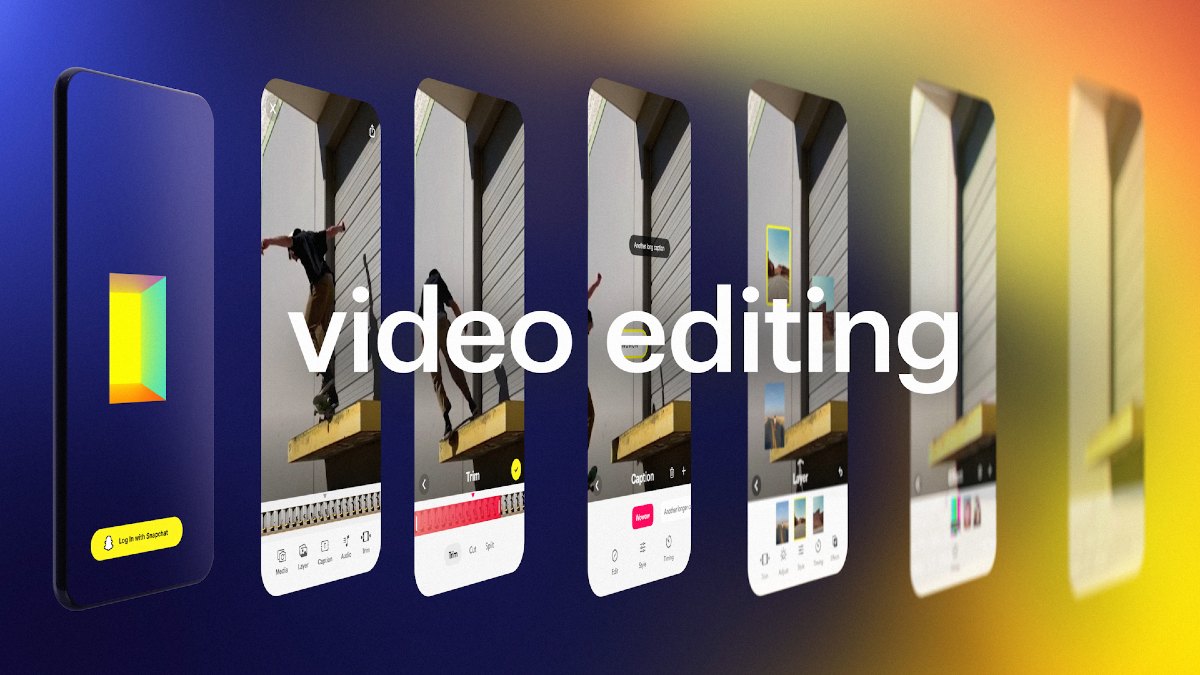 Snap is also rolling out Spotlight, its in-app competitor to TikTok, to global markets. The feature was introduced in November and is claimed to have reached 125 million monthly active users. The number of viewers watching Spotlight for at least 10 minutes per day grew by over 70 percent from January to March,” the company said.

Users who don’t have a Snapchat account are now also provided with a Web destination to let them watch Spotlight content online. Similarly, creators and brands are enabled to upload as high-quality as 4K content into Spotlight directly from Chrome or Safari. This could give a tough fight to TikTok and Instagram’s Reels.

Snapchat users will also start seeing Map Layers from select businesses that will overlay information on the Map. Snap has partnered with the restaurant recommendation platform The Infatuation to feature restaurants and ticket distribution company Ticketmaster Entertainment to showcase concerts as layers.

Snap claims that more than 250 million Snapchatters already use the Map feature on the app every month. There are also over 30 million businesses who are on the Map, the company said.

Specifically for developers, Snap has brought a Sticker Kit that is claimed to have a collection of over 34 million Bitmoji, Stickers, and GIFs from Snapchat that can be used on any third-party apps. Snap has also brought a Camera Kit in partnership with dating platform Bumble to let its users send video notes and use Snapchat lenses to personalise their dating experience. Later this year, Bumble will also integrate Sticker Kit to bring Bitmoji, Stickers, and GIFs from Snapchat to its platform.

To make Games and Minis more accessible on the platform, Snap is also bringing them for access by swiping down on the Snapchat camera. Users will also get the ability to pin and organise their favourite Games and Minis and also see a feed of timely updates. Snap has additionally brought Poshmark Mini and Ticketmaster Mini as two new Minis to the platform.

Snap also announced its partnership with Unity to allow game developers to offer Bitmoji into their mobile, PC, and console games, directly using the Unity platform.

The last major announcement at the Snap Partner Summit was around Snap’s multi-year partnership with National Park Service and Santa Monica Mountains Fund Re: wild. It is aimed to educate Snapchat users on the impact of climate change on landscapes and communities through original content and AR experience.